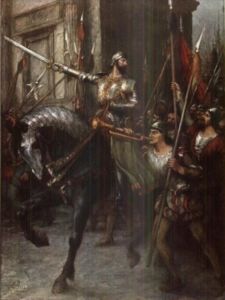 A new style of meme has cropped up on our side of YouTube known as “Little Dark Age.” The gist of it is that there is a series of videos which play the catchy end of the song “Little Dark Age” by MGMT in the background as typical images of modern degeneracy are flashed on the screen. Midway through the video, which is usually a couple of minutes long, the song picks up, and nostalgic images of past Western glory replace the modern images.

At first, these memes seemed to be uplifting and benign. However, the more I watched them and sifted through the comments on them, the more I found that the meme was in some ways darker than previously imagined — quite macabre, in fact.

Outwardly, these memes seem to advocate for some sort of restoration: to inspire viewers to rise to the level of our ancestors and build something greater out of the ashes of our civilization. Indeed, many commenters and perhaps even their creators still believe this to be the case. The videos are surely not Left-wing propaganda, and they clearly cater to the young New Right, as is obvious from the avatars and themes used by many of those who are viewing these videos and frequenting this side of the internet.

There is something sinister that can be noticed after viewing more than just a few of these memes, however: There is no vision of the future offered.

More specifically, these videos exclusively appeal to the past, and show no intention of transcending that past beyond accepting that that which is good is dead. They essentially say, “Things have gotten so bad, but remember when things were better?” Most of those who watch these videos were not yet alive when times were “better,” of course — though that’s neither here nor there. Some of the videos have more contemporary subjects, such as the Trump presidency or various Christian activist demonstrations. But even these are appealing to the past, and this almost makes them more depressing. If a video makes use of Napoleon, we know that it happened two hundred years ago. self. When Trump and Christian demonstrations are used, it’s as if we are being taunted with the failure of our hopes and dreams. The path they offered is now unattainable — but just barely, which makes the sting that much harsher. Often one will see comments referencing the Dr. Seuss quote: “Don’t be sad that it’s over. Be happy that it happened,” showing that the commenter has resigned himself to admitting that it is indeed over and that there is nothing left but dissolution.

I doubt the creators of these videos understand them in this way, but it’s on a subtle psychic plane that these subconscious meta-memes creep into the meme itself. One can’t help noticing the feeling of a sort of Faustian last stand in them: putting on a brave face in the face of certain destruction. I also once advocated for this sort of “men among the ruins”/”ride the tiger” approach; however, now that I have seen the fruits of such approaches, I believe it is now prudent say that you should be careful what you wish for. I have coined the phrase Blackpilled Bloomer to describe this spirit, meaning one who maintains an inner optimism and an outer pessimism.

The most common meme within the meme are comments asking, “How does it feel to live in [insert something terrible, like ‘a dying empire’]?” The answer: “euphoric.” Surely one should maintain one’s optimism within. The problem arises when outer pessimism sets in, causing one retreat into one’s self, whether that be a retreat or of some other sort, shirking duty and the spiritual fruits of action.

Am I being pessimistic? Perhaps I’m too hard on these kiddos and their memes. It seems, however, that these videos are a truly prototypical representation of the “cope” that must necessarily exist to keep the masses of post-Trump white zoomers sane while they watch their entire world — the world which has been sold out and lied about — come crashing down.

Therefore do not go gentle into that dark night, as the Blackpilled Bloomer ideology would have you do. Rage, brothers, and remember what has been taken from you. Your time is not now, but it is coming. The zoomers have been domesticated and inundated, and those who have done this to them are also attempting to deracinate and homogenize them. While I and others have many criticisms of the aptly-named Generation Z, it is foolish to pretend that they are all irredeemable. In fact, those who partake in this type of meme culture are the ones who are receptive and who see through the matrix, understanding that something is deeply wrong. They see the cynicism and lack of sincerity in the world around them. And when they are young, they are the closest to the state of mysticism. Rather than allow these good souls who have sprouted out of the grime that is their generation to drift away, we must encourage them to become warriors for beauty, seekers of the transcendent, and the climbers of mountains.

Without this alternative, there is no hope for the discord generation. If we are to allow ourselves to sit idly by while the internet zoomer, isolated from anyone else like him, stands alone in this spiritual fight, we cannot blame him when he sinks, at best ending up as a Blackpilled Bloomer. It is this type who rides the tiger — but the time to ride that tiger has past. The time has come for action — not against the government, or even against anything at all, but rather for ourselves and our people. It is time for pure action: for communities to form and for us to lift up the lost zoomers, lest they are forced to believe that the best they can do for their people is to post on /pol/ and watch political videos.