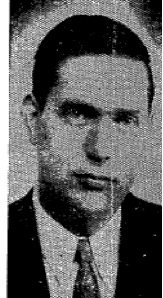 My theory on Feds is that they’re like mushrooms: Feed ’em shit and keep ’em in the dark.
–Mark Wahlberg’s character in Martin Scorsese’s The Departed)

The gracious and courtly Harald Keith Thompson — he told me to call him H. K., as we had too many Keiths around — would never put it that crudely. But when it came to disseminating (mis)information, H. K. and Marky-Mark were very much on the same page.

The wonder is that some investigators would gladly repeat his stories as gospel truth even when they knew Thompson liked to tease and deceive.

I’m thinking in particular of two Left-wing journalists, Kevin Coogan and Martin Lee. Colleagues and sometime collaborators (they shared bylines at Mother Jones), each of them spent most of the 1990s cranking out an impressive doorstop of a book. Coogan called his Dreamer of the Day: Francis Parker Yockey and the Postwar Fascist International (1999), while Lee’s was simply titled The Beast Awakens (1997).

I should add that these are good, well-produced books, and often hard to find. If you can find them, you should buy them. But be aware they’re chuggy-jam with nonsense.

Like the Synoptic Gospels, they have the same cast of characters, cover the same territory, and promote the same thesis — to wit, that there is an secret international network of fascists, or Nazis if you please: an intricate, exclusive web that connects doddering SS officers in ODESSA to Willis Carto’s Liberty Lobby to the truck bombers in Oklahoma City.

Or perhaps I should say “connected” . . . the present day in these tomes is around 1995. Ancient history, maybe inaccessible to anyone under the age of 50.

Preposterous? You bet. But it’s also a spicy, irresistible idea. I mean, think of the movie scripts you could write!  And don’t tell me it’s been done to death. This subject will never be done to death.

As with Levy’s Real Jewish Rye, you don’t have to be Jewish to see the attraction here. Coogan and Lee both laid the pastrami on thick, and they had a helping hand from the master prankster himself, Mr. Harald Keith Thompson. Both books basically consist of interviews and memoranda from H. K. Thompson, and H. K. really piled it on. Some of the more piquant allegations have achieved the status of quasi-history.

It’s all a lovely tale: Nazis and Jews, Jewish Nazis, and sexologists doing the swinger thing. Very chic and comme il faut — but, alas, not very likely. There are simpler, more obvious explanations. The truth seems to be that these people were connected by a literary circle appended to Tiffany Thayer’s Fortean Society. You can research that on your own. The Fortean Society still exists, although without the exciting cast of characters.

If H. K. was straight-up lying to Lee and Coogan, that would be one thing. (Master Prankster Scores Again!) But no, his whole spiel was about how he continually gave misinformation to the FBI and other investigators. He gave the Feds false leads, putting them on the wrong track. Back in the ‘50s, H. K. would tell them that he’d seen Frank Healy (i.e., Yockey) at a party or someplace, but this would be months after Yockey had fled the country. H. K. did this simply to get the Feds chasing their own tails for a while.

Lee and Coogan knew Thompson wasn’t on their side, but nevertheless he was the gold standard of sources. He evidently knew Otto Skorzeny and Otto Ernst Remer; he most certainly knew Yockey and Viereck. He was part of ODESSA, man! The very fact that Thompson even spoke to Lee or Coogan was in itself newsworthy, not to mention flattering.

In truth, H. K. hid in plain sight and talked to everybody.  He gave his friend and neighbor Lyle Stuart (alias Lionel Simon) a chapter of a never-to-be published memoir or novel in which H. K. disses Yockey as a dangerous fellow who should be avoided. He did this so it would find its way to the ADL and FBI, whom he never tired of taunting.

H. K. published a jokey article entitled “I Am an American Fascist” in Lyle Stuart’s Exposé magazine in 1954. After that, he pretty much went to ground. He wasn’t a person of interest again till the 1980s, when the Institute for Historical Review discovered him, largely thanks to my old friend Keith Stimely.

Stimely, sometime editor of the Journal of Historical Review, was led to the other Keith while he was compiling material for a biography on Yockey that was never written. A true scholar, Keith Stimely loved to research, but hated to write. His biographical notes posthumously ended up becoming the skeleton of Kevin Coogan’s Dreamer of the Day.  Keith found H. Keith Thompson in Hornell, New York, now an obscure town but once a major stop on the old Erie line (and still prosperous, as it’s one of the few places left where railroads or light-rail lines can assemble or repair rolling stock).

By 1984, H. K. was long retired and pretty much out of politics, far-Right or otherwise, apart from the occasional Angry Old Man letter to the newspaper about parking spaces or automobile inspections. On the recorded tape, which now seems to have disappeared (though there is a transcript), H. K. was very laid-back and self-effacing. Asked about Yockey’s Imperium, he hugged his big Labrador and said, “I believe in the dog imperium!”

Often a spot of truth would emerge in the H. K. Thompson narrative; he didn’t so much deceive as make the facts un-researchable. I found this out when I discovered that I knew one of the minor characters in his story.

Back in the 1970s I attended the Lycée Français in New York, with someone whose mother had once been a longtime and loyal intime of Francis Parker Yockey. In the early 1950s she had been Yockey’s devotée, acolyte, and mistress. At age 15 I’d barely heard of Yockey. I certainly would not have known or cared that this schoolmate’s mother (who worked a few blocks away) had been Yockey’s girlfriend.

Fifteen years later, I met H. K. Thompson and heard about Yockey’s long-ago inamorata — and the penny dropped. Almost immediately, I rang up my friend’s mother. Just a beau geste on my part, you know — though a horribly naïve one, as you’re aware if you’ve read this story before. I thought I was providing some excellent background for Keith Stimely’s proposed Yockey biography.

But of course Mrs. Virginia Allen was totally shocked to hear the names Francis Parker Yockey and H. Keith Thompson, maybe for the first time since the FBI had grilled her about them in the 1950s. Screaming over the phone, she denounced me, and Yockey, and Stimely, and Thompson, for even raising the subject more than 30 years later.

The whole point of this narrative is that the basic tale was accurate. H. K. would fudge the details to fool the baddies, but — as Huckleberry Finn said of Mr. Mark Twain — “he told the truth, mainly.”

« White Americans are the System’s Number One Enemy