In Defense of Hatred — of the Right Kind 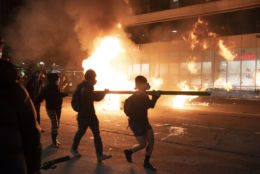 One of the Left’s completely un-hateful protests against hate.

These six things doth the Lord hate: yea, seven are an abomination unto him: A proud look, a lying tongue, and hands that shed innocent blood, a heart that devises wicked imaginations, feet that are swift in running to evil, a false witness that speaks lies, and he that sows discord among brethren.–Proverbs 6: 16-19

What is to be done about hatred? I mean “hatred” — yet another word coopted and perverted by the Left. It has become almost exclusively a political-ideological weapon, and in the world of meta-politics, a word that the Left owns and uses to beat up the opposition. They wield it to stigmatize and delegitimize persons or institutions insufficiently enthused about the forced march toward the “equality” they envision and those who resist the relentless assaults on their speech, their faith, their traditions, and their heritage.

If you have a traditional, Christian view of marriage, you hate homosexuals. If you question affirmative action, you hate blacks. If you are uneasy about the flood of Third World immigrants, you hate foreigners. If you suggest that entitlement programs are out of control financially and should be reformed, you hate (check all the boxes) the poor, the sick, the homeless, the disabled, the elderly, and more. Donald Trump, who during his presidential campaign, proposed a more vigorous vetting of Muslims entering the US because Muslims seemed to be the busiest of our newcomers when it comes to mass murder (the Orlando night club slaughter, for example), was roundly derided as the candidate of hate. Meanwhile, Hillary Clinton, who referred to her opponent’s supporters as “deplorables” and as “irredeemable, but thankfully they not part of America,” remained the exemplar of compassion.

For the cultural Marxists, their politics of “social justice” is the practice of selective compassion: the selection of victim-classes of oppression and bigotry and crafting the narrative of their suffering; the identification of the recalcitrant oppressors and the undeserved fruits of their exploitation; and the inevitable denouement, the oppressors unmasked and excoriated: bigots, incapable of human compassion, motivated by that primitive tribal emotion, hatred.

Once convicted as haters, they can be pushed outside the boundaries of common humanity and rightfully denied any moral or political space to compete with their ideas and practice their beliefs, pushed to the fringes where, if they remain compliant, they can be “safely” ignored. This crude, delusional juxtaposition of selfless compassion (them) versus gross visceral hatred (us) fuels the Left’s sense of its vast moral superiority and is the source of authority for its claim to impose its diktats and regulate the details of everyone’s life.

Consider for a moment the frequently referenced, self-proclaimed authority on “hate groups,” the Southern Poverty Law Center, a disseminator of agitprop whose executors are able to live in high style by selling the absurd fiction of a threatening, powerful Ku Klux Klan. From its website: The SPLC is dedicated to fighting hate and bigotry and to seeking justice for the most vulnerable members of our society. Simple and irresistible. How can you not be against hate and bigotry? It is tested and marketed to appeal especially to a well-heeled, high-minded clientele who embrace a politics of arrested development. Being rich and being white can be a problem: white guilt, aka “white privilege,” about which of course the SPLC has a lot to say. And, they can help with that: with a generous tax-deductible check comes some guilt relief with the bonus that one gets to imagine oneself as part of a courageous anti-fascist, anti-racist crusade battling the multitudinous hordes of neo-Nazis and Right-wing bigots pouring out of the small towns and farms of white America. Think of those BLM yard signs as guilt-insurance certificates.

The pure cynicism beneath this fake idealism, manufactured heroism, and virtue-signaling comes straight out of the Bolshevik playbook of the 1930s, drafted and perfected by Stalin himself. From the Constitution of the USSR, adopted in December 1936, under Stalin’s direct supervision:

ARTICLE 123. Equality of rights of citizens of the USSR, irrespective of their nationality or race, in all spheres of economic, state, cultural, social and political life, is an indefeasible law. Any direct or indirect restriction of the rights of, or, conversely, any establishment of direct or indirect privileges for, citizens on account of their race or nationality, as well as any advocacy of racial or national exclusiveness or hatred and contempt, is punishable by law.

Hate had no place in the Socialist Workers’ Paradise. No one could surpass the Stalinists in their professed enthusiasm for equality and no one could question their anti-racist credentials.

But with the Stalinists, there is always the absurdity and the irony that emanates from their alternative universe where everything is the opposite of what they say. This “equality” constitutionally guaranteed as “an indefeasible law” was drafted and promulgated during the very time when the grey tunic-wearing General Secretary of the Communist Party of the Soviet Union, dedicated to advancing the well-being of the toiling masses (the “most vulnerable members” of society, as the SPLC would put it), was practicing his own unique version of “hatred and contempt.” This was the staged show trials of his old Bolshevik compatriots, accompanied by a massive political purge that sent hundreds of thousands to the Gulag and slaughtered many thousands more.

Contemporary Stalinists like the ones who run the SPLC have imitated their predecessors and perfected a style of propaganda that disguises their goal, the destruction of political opposition, by intensively moralizing their self-image with the language of compassion and fairness and, conversely, demonizing the face and personality of the opposition. The moralized Stalinist of the 1930s was a little-guy champion and an anti-fascist, an image designed to make him always come out the winner in the game of ,“Which side are you on?” Even better, “fascism” was, and still is, an expandable-contractible sort of label, easily adjusted to fit whomever and whenever the occasion demanded. The twenty-first century moralistic Stalinist of the SPLC’s ilk is an anti-racist — which means that if he doesn’t like you, then, well . . . forget the groveling and self-criticism, Chinese Cultural Revolution style. It does no good. You have to join that other camp of the properly shunned, that “basket of deplorables.” “Racism,” like its cousin “fascism,” has a similar flexibility, which makes it suitable for attachment to those disagreeable sorts far and wide.

“Hatred” is one of a number of popular slurs in the Left’s agitprop lexicon. It joins “fascist,” “Nazi,” and “racist” — all words that rely heavily on evoking 1930s Europe: Mussolini’s Italy, Franco’s Spain, and of course Hitler’s Germany. How ironic it is that today’s “progressives” like Barack Obama, who claimed to see in history an “arc that bends toward justice,” have constructed a stark, historically frozen moral universe where Hitler never dies. He just perpetually reappears with broad support in contemporary incarnations: Charlottesville in August 2017, and January 6, 2021.
They cannot conceive of themselves as anything other than the moral obverse of the Brownshirts and goose-steppers? Of course; the more morally repugnant and malignant your opposition, the greater your own goodness and virtue glow by contrast. Without Nazis to fall back on, the moralism of today’s progressives would evaporate.

With the frenzied and indiscriminate attachment of “hatred” to its critics, the Left exhibits its grossest defects, its rank hypocrisy, and its incapacity for critical self-reflection. The unprecedented outpouring of contempt by the Left for Donald Trump and the 75 million Americans who voted for him last year suggests that the hatred so eagerly attributed to so many others is a projection of their own hatred and loathing, to which they are astonishingly oblivious.

There is, finally, as we see in Proverbs above, a “righteous” hatred, the hatred of a just God for wickedness: lying, the killing of innocents, vanity, and deceit all deserved to be hated. But this is not the hatred that the Left rails against. Hatred for them is completely and ultimately political, something that is only found on the Right, and something that they themselves, in all their rectitude, somehow never experience. This projectionist approach of turning your critics into deeply immoral, “irredeemable” people enables the Left to advance even further toward what they seek: a complete monopoly on power.

“Hatred” as a political weapon thus achieves its perfection when it moves from de-moralizing the opposition to its full criminalization: hate crimes. With the criminalization of hate, the full, unimpeded power of the State can be brought to bear on unpopular thinking and speech. No competition allowed: the monopoly is complete. Hate crime laws have paralyzed the Right in Europe and Canada and cowed their populations. Here, it is well underway.

« What Do You Say When Someone Accuses You of Racism?