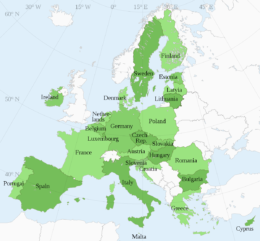 The map of the European Union after Brexit.

Recently I had dinner with an Englishman who could have stood in as “a good man from the Shire” sort of character on an episode of PBS’ Masterpiece Theater. I raised the question of Brexit: good or bad? His response was very negative. He then went on to describe the many problems of Britain’s exit from the European Union.