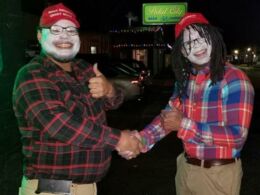 Conservatives often lampoon the most egregious examples of Leftist social constructivism, yet they are not immune to indulging in blank-slatist fantasies when it suits them. The conservative civic nationalist project of subsuming disparate racial groups under one flag is a form of social engineering premised on blank slate ideology.

Being less flaky than liberals, conservatives do not attribute racial differences to imaginary bogeymen like “systemic racism.” Instead, they point to observable phenomena that actually do affect differences in life outcomes, such as family structure, economic incentives, and culture. These factors are not irrelevant, but their impact is far outweighed by that of inborn differences between the races caused by millennia of divergent evolution.

Conservatives provide societal explanations for the disparities between blacks and whites because they dread the thought that multiracialism is doomed to fail and that it could spell the downfall of America. Furthermore, the taboo against race realism is such that otherwise sober and clear-thinking conservatives encounter a psychological barrier when it comes to race.

The factor to which conservatives assign the most blame for black criminality and underachievement is fatherlessness, which they attribute to the “welfare state.” This is misguided on many levels. To begin with, if black fatherlessness were eliminated, blacks would still have elevated crime rates on account of their lower IQs. There is a robust correlation between low IQ and criminality.

Second, one cannot blame black fatherlessness entirely on social trends. Teenage pregnancy is strongly correlated with low IQ. The fact that blacks’ mating patterns resemble those of their African cousins is another strike against the “welfare state” theory; polygyny was historically the norm in Africa.

Third, even if one were to endorse the “welfare state” theory, one would still have to address the question of why blacks are poorer and thus disproportionately affected by welfare policies in the first place. Other groups have overcome poverty and social prejudice before. Again, IQ is the most salient factor.

There is zero evidence that fatherlessness is the greatest contributing factor to black crime. IQ is a greater predictor of criminality than being poor, unemployed, or raised by a single mother. Black crime is lower than it was in the 1970s and ‘80s even though the rate of black out-of-wedlock births has soared, as one can see below. Likewise, there has been no uptick in white crime rates despite the huge increase in out-of-wedlock births among whites. It is true that children raised by single mothers are more likely to engage in anti-social behavior, but the gulf between black and white crime rates cannot be blamed on fatherlessness. 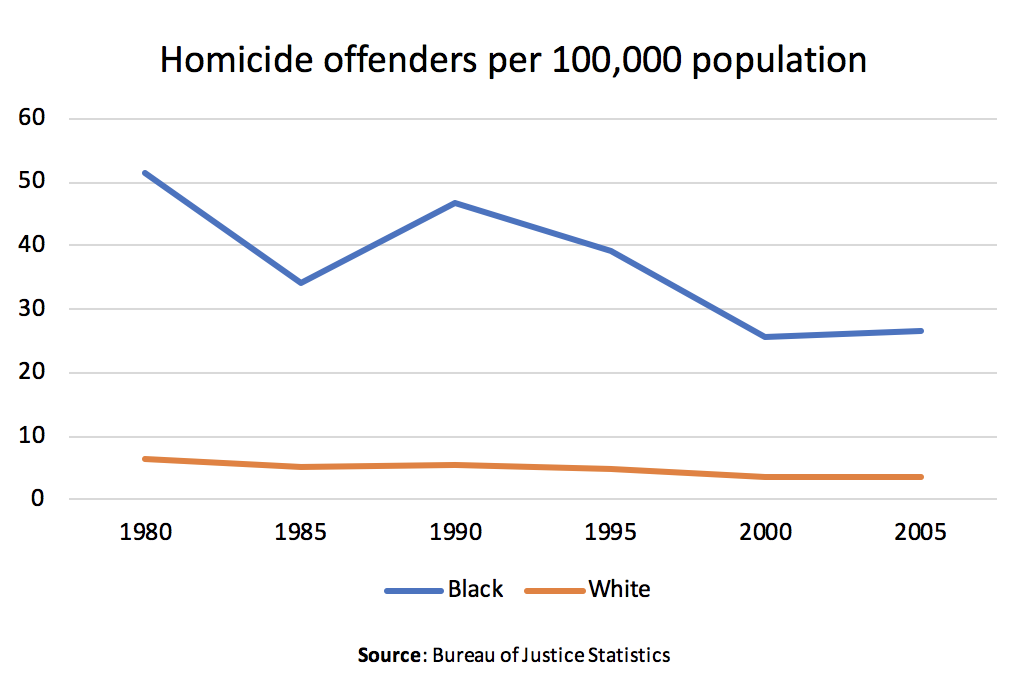 So what single societal factor affects black crime rates the most? The answer is the degree to which the law is enforced; i.e., the degree to which blacks are subjected to the dictates of white society. (See this article by Huntley Haverstock for a refutation of the argument that poverty causes crime.) After peaking in the 1980s thanks to the crack epidemic, black crime declined in the ‘90s as politicians like Rudy Giuliani implemented “law-and-order” policies and took an aggressive approach to fighting crime. Conversely, crime rates in New York City went through the roof in the ‘70s, when about 5,000 police officers were laid off in the wake of the economic destruction wrought upon the city due to white flight following the riots of the ‘60s. We are seeing a similar phenomenon play out today in New York and Minneapolis. Both cities are witnessing an increase in crime due to a reduced police force and white flight.

BLM activists are not wrong that policing is a form of white supremacy. It is a method by which whites impose order on blacks and force them to adhere to white standards. This arrangement is not sustainable because blacks resent being policed by whites and will inevitably retaliate.

Conservatives sometimes claim that single parenthood and family instability are to blame for black underachievement as well as black crime. This claim does not hold water. The famous Minnesota Transracial Adoption Study found that black children raised by white adoptive parents had an average IQ of 83 at age 17. Despite being raised in presumably stable, middle-class, two-parent households, their scores were similar to those of typical black children. White adopted children had an average IQ of 101, and white children raised by their natural parents had an average IQ of 105. The average class rank of the black children was slightly above what one would predict based on IQ, probably due to the benefits conferred upon them by their upbringing, but still well below average. The co-authors tried to spin the study in favor of blank slatism, but it clearly supports hereditarianism.

Another common claim is that black underachievement can be explained by black culture. Conservatives bemoan the fact that black children who excel in school are picked on for “acting white,” as if racial differences would disappear if blacks were simply given more incentives to do their homework. This ignores the fact that culture is an outgrowth of biology. White people value individualism, altruism, and honesty because we have a biological predisposition for such traits. Generally speaking, the values of a given group are a reflection of the character of its members.

A recent article published in Quillette entitled “Why White Privilege Is Wrong” is a good illustration of the typical conservative approach to the question of racial differences. The authors, Rob Henderson and Vincent Harinam, dispute the existence of “white privilege” and posit fatherlessness, culture, and geography as the main causes of differences in group outcomes. Not once in the article do they suggest that there could be a biological basis for racial differences. This is not surprising given the brand of sanitized, faux-contrarian skepticism that people associated with the so-called “Intellectual Dark Web” seek to cultivate.

The authors’ most laughable claim is that the variance in social mobility across the country is proof that geography can contribute to racial differences. The idea is that blacks could attain parity with whites simply by planting their feet in the magic dirt of “good neighborhoods.” It does not occur to the authors that social mobility is highest in the rural Midwest and Northwest because both regions are overwhelmingly white. White people have more potential to be upwardly mobile because they are relatively bright and evolved to be trusting (thanks to the Church’s weakening of kinship structures in Europe), which enhances their willingness to engage in transactions with others and participate in social institutions. The authors state that the degree of upward mobility in a community is linked to social trust, but they don’t make any connections beyond that.

There is evidence that blacks who are given the opportunity to grow up in a good neighborhood have better outcomes than those who do not, which makes sense. Growing up in a crime-ridden ghetto is not going to do you any favors. However, blacks and whites growing up in the same neighborhood will have different rates of upward mobility, and the reason why “good” neighborhoods can confer benefits on blacks in the first place is that they are mostly white.

Also, there is no way to ensure that all blacks will grow up in good (read: white) neighborhoods. Throughout the article, Henderson and Harinam hint at possible solutions to the societal ills supposedly at the root of racial disparities, but they never explain exactly how such solutions might be enacted. In this case, you would have to scatter blacks all over the country and raise them in white neighborhoods where they would be in the minority. This would never happen, and most blacks do not like being constantly surrounded by white people, anyway.

The conspicuous absence of any mention of genetic factors in Henderson and Harinam’s article — and by conservatives in general — is striking. Genetic differences are the single most powerful contributor to racial disparities. Anyone who does not acknowledge this is cowardly and dishonest.

The authors have clearly been influenced by Sowell’s Discrimination and Disparities and Black Rednecks and White Liberals, both of which are cited in the article. I do not blame Sowell for downplaying the importance of biological racial differences. Being a conservative black intellectual is lonely and depressing enough as it is. But white people need to be confronted with the cold, hard reality of racial differences.

The conservative denial of racial differences constitutes a form of blank slatism that is arguably more insidious than its Leftist counterpart. It appears reasonable and fact-based, and makes one wonder if racial integration might just work. Conservatives who would otherwise be sympathetic to our ideas are blinded by their stubborn hope that non-whites are capable of assimilating to white norms and becoming indistinguishable from normal, law-abiding white Americans. Once they are faced with the reality that this a futile endeavor, they will have no choice but to embrace White Nationalism.