What’s Behind the Pope’s War on the Latin Mass 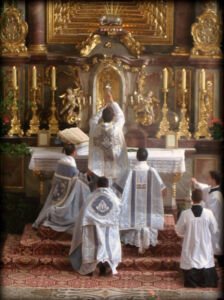 Pope Francis effectively condemned and restricted the Traditional Latin Mass (TLM) last week. The Vicar of Christ issued a letter revoking Pope Benedict XVI’s Summorum Pontificum, which welcomed the Latin Mass and encouraged its spread. Francis said this policy change was needed to curb division within the church. The papal edict argues TLM congregations sow discord, and they need to recognize Vatican II as a fact.

The new order isn’t 100% clear in what it entails. Most dioceses waited to make a move concerning TLM practices within their jurisdiction. A few flat out banned the practice within diocesan churches, leaving the traditional mass exclusively in the hands of orders such as the Priestly Fraternity of St. Peter (FSSP) and the Society of St. Paul X (SSPX). The edict discourages bishops from allowing new Latin mass parishes to take root and requires these groups to state their loyalty to Vatican II. It also makes clear that the new mass — the Novus Ordo — is the one true liturgy of the 21st-century church.

The order could lead to a mass suppression of the old mass, or it could leave things as they are now while slowly strangling its growth. What is clear is that the Pope wants to curtail the spread of the TLM. He sees it as a threat to this vision for the church and he wants it to end.

The move was greeted as another Drogheda by conservative Catholics. Everyone from Ben Shapiro lackeys to integralists went ballistic over the order. They couldn’t believe the Holy Father would take away their mass. Some said it was an act of war against traditionalists. The wailing and gnashing of teeth did little to sway the hierarchy. The laity have very little say over how their church is run — unless they wield tremendous power through secular institutions like the federal government. Conservative Catholics don’t have that kind of power. Nor do they even have much manpower. Despite their large presence within the conservative movement and on Twitter, there are an estimated one million traditionalist Catholics in the entire world. That’s 0.1% of all Catholics. (There are 1.3 billion faithful.) Even among western countries, their numbers are not as high as trads may like to think. Traditionalist groups estimate on their own that there are around 100,000 TLM goers in the U.S. There are over 70 million American Catholics.

Francis doesn’t have to worry about a major schism when faced with these numbers. Trads are not an insignificant minority, however. They are well-represented in Catholic and conservative media. Pretty much every English-language Catholic outlet that leans right is operated by TLM sympathizers. This group isn’t particularly fond of Francis. They’ve hated his outreach to gays. They hate his support for liberal reforms in church teaching. They’re disgusted with his embrace of third world worship practices that smack of paganism to traditionalists. The Pope has also seemingly turned a blind eye to rampant sex abuse and homosexuality within the church. These Catholic media outlets have churned out a deluge of criticism for Francis, his allies, and his policies. The Pope probably feels justified in retaliating by taking away his critics’ mass. He is the Vicar of Christ after all, and he may feel the flock doesn’t respect him enough.

The most obvious reason for the restriction is what’s stated in the letter. Francis wants to promote unity by stifling an unruly element within the church.

But there is a larger mission at work here and it’s something that even trads don’t want to address. Ever since Vatican II, the Catholic church has sought to lose its European trappings and become a more authentically global organization. Most of its members now belong to the non-white world while white Catholics lose the faith in record numbers. The Tridentine Mass is a throwback to the discarded past and is mostly enjoyed by whites. It’s hardly practiced in Africa, where 250 million Catholics dwell and take in the faith through their native languages and practices. The TLM, barring a miracle, was never going to become the primary mass of the church even before Francis’s letter. Now TLM enthusiasts will have to acknowledge that fact following the order. Even though TLM adherents love to claim it attracts the youth, most youth, particularly white youth, are leaving devout religion. More young people believe in horoscopes than an all-knowing God. The youth who do stay with religion are usually more liberal than older congregants. Young Catholics are more supportive of homosexuality than older Catholics.

While liberal Catholics are probably less faithful than traditionalist Catholics, there are far more of them, particularly in the West. Keeping them within the church is a bigger concern for Francis than preserving the liturgy of traditionalists. Francis faces a more pressing problem for church unity in the conflict between faithful in the West and in the Third World. Some readers may think this pits Latin Mass-loving westerners who want a stricter faith versus globalists who desire a more liberal faith. It’s actually the opposite. The Western church, as represented by Germans, wants a more gay-friendly church that welcomes female priests. The church in the Third World is adamantly opposed to this. Neither side cares about the TLM, and the two sides are on the opposite side of issues dear to identitarians. Western liberals and African conservatives both support mass immigration to the West and the noxious concept of “racial justice.” The difference is over adherence to traditional Christian teachings on sex and gender.

This conflict is where the real threat of schism lies. The German church is already starting to defy the Vatican. Over 100 German parishes began to recognize and bless gay couples in May. Teutonic bishops are discussing the prospect of ordaining women priests. The Vatican has threatened stiff punishment for any deviation from orthodoxy, yet it has done nothing about the German church embracing gay marriage. It’s quite the contrast to how Francis swiftly cracked down on traditionalists in retaliation for online grumblings about his papacy.

He’s trying to prevent an open break with an international conclave that will likely drown the demands of western liberals beneath the tribal dances of Africans. The German church still may bolt to the delight of its liberal congregants who want a more progressive Catholicism. That example may inspire further breakaways in white countries. That wouldn’t necessarily spell the end of the church.

The future of the Catholic church lies with the non-white world. In 2010, sixty-seven percent of the world’s Catholics lived in either Latin America, Africa, or Asia. Only 24% of the world’s Catholic population lived in Europe (and a not insignificant number of those Catholics aren’t European). In 1910, 65% of the world’s Catholics were in Europe. Those numbers have surely changed in the non-white world’s favor since then. It’s expected that there will be twice as many African Catholics as European Catholics by 2050, and many of those “European Catholics” will be African themselves. As previously mentioned, these third world Catholics don’t adhere to traditional liturgy. Most of them mix their traditions and customs with the church in the same way Germanic tribes did in the Dark Ages. Francis’s Amazon Synod in 2019 showcased many of these traits, with tribal dancing and crude idols from Amazonians. Third worlders create a faith that expresses their identity — and it does not include the Latin Mass. But they do share the social conservatism of the traditionalists.

The various peoples of the non-white world will shape the church for years to come. This means the Vatican won’t change its stances on abortion or sexual morality. But it will be even more committed to bringing these faithful to white countries. The Catholic version of the Great Replacement means swamping undevout whites with devout non-whites. It matters little if Muslims and other non-Christians are brought along in the process. This will also mean that church practices and liturgy will be more third-world in style. The concerns of a tiny minority of whites won’t matter when the masses of color demand shamanism. Liberal Catholics won’t mind these changes. Goofy white liberals love exoticism, and they will happily join in the strange dances and chanting. What they will mind is demands they follow church dogma on sex and marriage.

Francis has to perform a delicate balancing act. He wants to appeal to the globalist powers in the West and demonstrate he’s not a zealot. It’s why he opposed the U.S. Conference of Catholic Bishops supporting the denial of communion to pro-abortion politicians. He doesn’t want to ruffle the feathers of those in charge. But at the same time he wants to make the church better represent those who actually practice the faith.

Whatever happens in the conflict, identitarians should understand that the church is no longer a “white” institution. Its interests will fully align with those who want to replace us and ruin our homelands. Unless whites suddenly return to church en masse, and all of these whites are racially conscious (an unlikely scenario), the church will continue on its present path. The only real hope to restrain the church’s complete turn into a third-world institution is for our side to win secular power. Then the prelates would accommodate our interests in the same way Francis sucks up to gays. The Vatican would know better than to advocate mass immigration if we were in charge.

But until that victory occurs, identitarian Catholics are put into a serious conundrum. Do they grit their teeth and remain within a hostile organization that doesn’t even grant them their preferred mass? Do they back a schismatic sect or leave the faith entirely? This is a question best left to the identitarian Catholic himself. The best solution for now is for them to support the work of Latin Mass orders like the SSPX. The SSPX has irregular status with the Vatican and can ignore the worst actions of the current prelate. But there may come a time when these groups are declared schismatic and kicked out of the church. That may be for the best; identitarian Catholics would no longer need to worry about the Vatican in that case.

One thing is certain: we can’t hope to save our civilization through the Catholic church alone. It’s on the side of those who want to replace us.