Resistance: An Interview with Fenek Solère 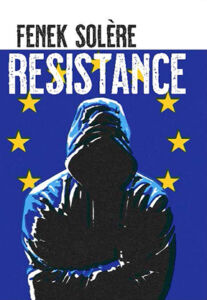 Greg Johnson: Can you give us a brief introduction about yourself for our readers?

Fenek Solère: Being a life-long advocate for White Nationalism and European culture, wherever it has taken root in the world, I have published four novels: The Partisan (2014), Rising (2017), Kraal (2019), and now Resistance (2021), as well as over 350 articles, short stories, and poems at Counter-Currents, European Civil War, The New European Conservative, Europa Sun, Defend Europa and Patriotic Alternative.

GJ: What is Resistance about in a nutshell?

FS: It is about one young man’s awakening to the globalist tyranny we see unfolding in events such as the recent fraudulent US Presidential Election, the Great economic Reset facilitated by the coronavirus pandemic, the Great Replacement through mass immigration, the oligarchic behavior of monopolistic Big Tech, Cancel Culture courtesy of the apostles of the new religion of Woke and the proselytizing of political correctness, the arrival of Orwell’s surveillance state, and the incessant anti-white narratives permeating the 24/7 news media.

GJ: Who is the ideal reader you envision for your novel?

FS: The novel is multilayered and aimed at a number of audiences. Those first engaging with some of the key ideas we espouse will, I hope, identify with and be captivated by the characters and the fast-paced adventure that underpins the storyline. Recent initiates will find lots of material to follow up on in terms of the very rich historical and cultural legacy bequeathed to us by thinkers like Julius Evola, Francis Parker Yockey, and Jean-François Thiriart. Or, for that matter, poets like Ezra Pound and T. S. Eliot. Veterans and those already ideologically committed will see their worldview encapsulated in a credible fiction that moves beyond the one-dimensional movement novels of the past.

GJ: How does Resistance relate to your other novels?

FS: Although each novel can be read and enjoyed without recourse to the others, they are in fact part of a projected series of seven novels. For example, Peter Janssen, the central character in Resistance, makes a rather telling appearance in Rising, and the adventures of The Partisan‘s heroine Sabine D’Orlac are referenced several times in Resistance — the various actions of the participants intersect with the infamous “Brigitte Bardot with guns!”

The whole project intermeshes national and international events as they are currently unfolding and the direction I imagine they will take given the trajectory dictated by those who wish to abolish borders in white countries, de-industrialize the West, denude the middle class, introduce a digital credit currency as a means of social control, and impose a sort of progressive corporate supra-national government upon traditional ethnic communities whom they wish to reduce to commodities.

GJ: The young people in your novels spend a lot of time reading, not gaming or chatting on social media. Is that realistic?

FS: I depict Peter Janssen as spending an inordinate amount of time chatting on social media and being influenced by all the negative aspects of the tech gadgetry available to young people today. An intelligent but easily influenced young man, subjected to his mother’s idealistic and overbearing ‘68-style rhetoric, it is only when his own family is directly impacted by avaricious migrants that he seeks out magazines, journals, and books that slowly convert him into becoming the political soldier of the second half of the text.

Likewise, other characters, such as Senka the Serbian girl, the members of the Nordic Resistance, and the Latvian, Spanish, Italian, Polish, and Ukrainian underground groups provide a perfect platform and opportunity to describe the wealth of nationalist ideology dispersed across the West. I used the same technique in The Partisan to highlight French thinkers, Rising to shine a light on the Russian Right, and of course Kraal in the case of South Africa. Each deserves our time and respect.

I make no apologies for this. I believe it is essential that my fiction contains a certain didactic element. There is a purpose to everything I attempt, and although I may not always succeed, or fall short in some way, it is vital that we break the trend of over-strong parochial and local nationalisms that deflect us from the higher purpose of not only preserving the white race but ensuring it thrives culturally, materially, and demographically for many more millennia.

GJ: Why did you choose a novel as the medium to express yourself?

FS: I wanted to blend the various strands of our political ideology into an all-too-recognizable future dystopia and offer inspiration and hope through the storylines I create. I dilute nothing and offer a “bridge” for those beginning their journey with us to access the sometimes difficult and off-putting philosophical and theoretical texts by the likes of Nietzsche, Heidegger, and Schmitt.

GJ: Who are your literary models/icons?

FS: Besides those I name and write about in my many articles, I think Frank Herbert’s Dune and Beat writers like Jack Kerouac and William Burroughs deserve a special mention. Other influences include Philippe Djian’s 37°2 le matin, Thomas Mann’s The Magic Mountain, and Herman Melville’s Moby Dick, amongst a myriad of other literary luminaries.

GJ: What effect do you hope this novel has on your readers and the broader world?

FS: I want the book to galvanize our activists and provide a modern-day mythology to boost the morale of our people in whatever country they live and wherever they yearn to recreate homogenous communities reflecting Eurocentric sensibilities. As for the wider world, it should be read as a warning against the dangers of the multicultural globalism being foisted upon us by self-appointed overlords. A self-selected alien elite who control our elected politicians, the fiat financial apparatus fronted by the banks, the communication platforms that disseminate fake news and promulgate Left-liberal opinions, and of course, the media and marketing executives who bombard us day and night with images of miscegenation and attempt to infect us with the virus of egalitarianism and equality.

I see my novels as an antidote to the all-consuming pandemic of which Black Lives Matter, Antifa, and the illegitimate Biden/Harris administration are mere symptoms. My work and any proceeds that follow from it are plowed straight back into the demonetized websites, publishers, and groupings that fight back against censorship, blacklisting, and this tsunami of hate we have to endure every day. Every word I write is a very personal resistance to the contamination of modernity that is deliberately leading to our genocide and the systematically engineered usurpation of white homelands by parasitic economic migrants, pretend refugees, and Honduran caravans comprised of recently released prisoners making their way across the Rio Grande.

I begin Resistance with a quote from Guillaume Faye: “Now is the time for a dissident generation to rise.” I urge every one of us to heed the call.

My novels have also been favorably reviewed and I have been given interviews and had my essays quoted and syndicated on Arktos’ Interregnum, the Occidental Observer, Foundations of the 21st Century, Majority Rights, Wermod & Wermod Publishing, Radix, Western Spring, Alt.Right, Euro-Synergies, The Manndeville Blogspot, The Devil’s Guard, Blog-O-Spot, The Maverick Philosopher, HPANWO Voice, Howling at the Moon News, Liberae sunt Nostra Cogitatiore (Dispatches from inside a Canadian vassal state), the Delian Diver in the Czech Republic, Front Rex in Poland, Generation Identity in Hungary, and the A. K. Chesterton Trust’s long-running Candour.

You can order Resistance here.

« How to Quit White Nationalism