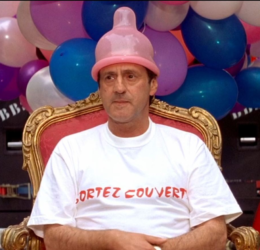 I hear it’s that time of year again when woke capital takes time out of its busy schedule to celebrate sexual deviancy and the courage of the gays. As has become customary, I will now use this time to reflect on the past — specifically, the 2001 French comedy Le Placard (The Closet).

François Pignon is a middle-aged button-pusher at a plastics manufacturing concern. He is divorced, but still in love with his ex-wife. His son ignores him and considers him a bore. To top it all off, he overhears rumors that he’s about to be fired from his job, foreshadowed by there literally being no room for him in the company photograph. So, he goes home and tries to commit suicide. His neighbor talks him out of it and convinces him to try and retain his job by pretending to be a homosexual. The neighbor photoshops (advanced technology at the time) pictures of François engaging in homosexual acts and forwards them to the office. All of a sudden, François cannot be fired due to political correctness considerations. Overnight, this gray, introverted little corporate bureaucrat is suddenly exotic and interesting to the surrounding characters. Turns out that all his life really needed was a little gay magic.

Le Placard is one of those films that could have only been made during its time. Twenty years earlier, Pignon would have been an effeminate grotesquerie prancing around the sets (which would have probably made for an entertaining film itself). Twenty years later, the notion of a heterosexual white male pretending to be gay scandalizes our puritanical overlords. Indeed, the very idea of a white male profaning gayness with his whiteness and toxic masculinity is unthinkable. Smelling salts would have to be administered.

The idea of a company having its hand forced by political correctness concerns and the gay lobby is also part of that period. Pignon’s company manufactures condoms, among other things, and is worried that a possible boycott by gays for firing a gay employee might hurt their bottom line, with the very un-PC and likely true claim that gays use more condoms than the general public. How refreshing to only have to worry about a boycott and not the state itself coming down like a ton of bricks on a company for daring to fire a minority. Of course, it would be a moot point, since the company’s staff — especially in the HR department, where the hiring and firing decisions get made — would all be fags and their hags. It’s doubtful Pignon would get hired in the first place in this day and age.

But even for a production of its time, the film is remarkably illustrative. It sends the message to white males, such as François Pignon, that the only way to redeem yourself is to embrace one of those fun, colorful LGBT identities. Otherwise, you’re just a nobody. It’s entirely natural for your son to reject you as boring if you’re just his dad, just a white, male, heterosexual, working stiff. It’s entirely natural for you to be a non-entity to your coworkers and an object of contempt for your ex-wife. Such is the lot of the straight white male, especially if he’s unassuming and introverted, like François Pignon.

But what of the Chad, the extroverted, assertive, masculine white male? A supporting character, played by Gerard Depardieu (who should need no introduction) is Félix Santini, a rugby-playing macho man who cracks a few gay jokes at Pignon’s expense, but is soon tripping over himself to make friends with Pignon, lest he be suspected of homophobia. Initially, Santini’s attempts to ingratiate himself to Pignon are comical, but soon his marriage falls apart and he is institutionalized after a nervous breakdown, all because he was afraid to be deemed a homophobe. Santini is also a user of racial slurs, so you’re supposed to feel no sympathy for him, but here’s the supposedly all-powerful white male, running around like a scared rabbit, buying gifts for the homosexual and ignoring his wife to placate the gay, suffering a nervous breakdown after Pignon turns down an offer to cohabitate. Even back in 2001, in France, which as I understand is somewhat behind the curve on the globohomo agenda, we see the immense power of the homosexual over the heterosexual, especially the heterosexual white male.

While we’re on the subject of gay power over the heterosexual, we cannot ignore the presence of the two main female characters of the film. The first is the former Mrs. Pignon, who is best described as a complete bitch. Pignon is still completely devoted to her and comes running at her beckoning, while she holds him in utter contempt. Only after he is outed as a homosexual — specifically after he takes part in a pride parade, sitting on a parade float throne with a giant condom on his head — does he gain the confidence to chew her out, name her for the horrible person she is, and proclaim that she doesn’t deserve him. Only as a homosexual can he take control over his life from this horrible woman.

His outing as a homosexual also makes him very interesting to the very sexual and attractive Mademoiselle Bertrand, his boss at the office who previously treated him as a piece of furniture. Whereas previously he was invisible to her or indeed any women outside his horrible ex-wife, Pignon is suddenly an object of attention, pursued by the voracious and vivacious Bertrand, culminating in a session of intense . . . heterosexuality in the condom assembly line, right in front of the company director and the prospective Japanese investors.

Message sent and received: the homo gets the girl.

Of course, what’s left unspoken during the whole film, or indeed in any of the reviews, is that Pignon was probably gonna get sacked for economic reasons. The film makes it out that his firing comes as a result of him “not fitting in” or because the bosses are just meanies, but in reality, people usually get fired for good reasons. Assuming that companies have an infinite surplus of money to give out to people for make-work is a very Leftist assumption to make, and so is the assumption that refusal to hire — or firing — can only be a result of people being mean. Le Placard is a relic of a time where being mean to a white heterosexual male was still considered somewhat unfair, so Pignon’s deception is still considered morally good. But the bigger picture is that under conditions of infinite or at least vast company wealth, the overriding factor of whether someone will be fired or retained is loyalty. Whether they can do the job or not is secondary, since the bottom line is not likely to be affected.

In the year 2001, especially before 9/11, even a high-tech French plastics manufacturer still lived more or less in economic reality. In the year 2021, vast gigacorps defy economic laws and are so intertwined with governments that the public-private distinction is more or less meaningless, even outside of France. Without the bottom line as a moderating influence, companies are completely free to hire and fire based entirely on loyalty, and as we know from previous articles, bioleninism is the best loyalty-generating system known to intersectional man, and that’s without even considering the gigacorp managerial staff’s free option. Only gigacapital can be woke capital, and gigacapital isn’t merely immune from economic reality — it can actively create demand by guiding its consumer base’s moral and aesthetic predilections.

Le Placard is one of those films which could be considered the swansong of white males, of humor irreverent of political correctness before such sentiments were cast out into the outer darkness. It is still a film that promotes the globohomo agenda — it probably would never have been approved otherwise. But it’s a good enough comedy for a rainy day that carries with it the nostalgia of the early 2001s, just before 9/11, when it looked like we were for yet another carefree decade free of big-H history.

» A Response to Nathan Cofnas