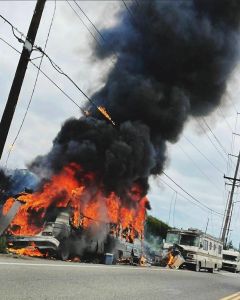 It’s a widely known fact that Lori Lightfoot, since she is married to a white woman who looks like John Kerry with tits, is the first black lesbian mayor of the Windy City. What’s not as widely known is that she earned her surname when, as a bright and inquisitive child, she noticed that the soles of her feet were lighter than the rest of her body.

Now, on the cusp of the halfway point in her first and hopefully last term as mayor of the city she’s trying to turn into Detroit, the ugly clam-licking dwarf has announced that she will henceforth only grant interviews to nonwhites:

I have been struck since my first day on the campaign trail back in 2018 by the overwhelming whiteness and maleness of Chicago media outlets, editorial boards, the political press corps, and yes, the City Hall press corps specifically. . . . I ran to break up the status quo that was failing so many. That isn’t just in City Hall. It’s a shame that in 2021, the City Hall press corps is overwhelmingly White in a city where more than half of the city identifies as Black, Latino, AAPI or Native American. . . . Diversity and inclusion is [sic] imperative across all institutions including media. In order to progress we must change. This is exactly why I’m being intentional about prioritizing media requests from POC reporters on the occasion of the two-year anniversary of my inauguration as mayor of this great city. . . . In the time since I was elected, our country has faced an [sic] historic reckoning around systemic racism. In looking at the absence of diversity across the City Hall press corps and other newsrooms, sadly it does not appear that many of the media institutions in Chicago have caught on and truly have not embraced this moment.

I have been struck since the day I first saw Lightfoot’s bugged-out goldfish eyes at her overwhelming hideousness and maleness. Sadly, it does not appear that any male has ever found her attractive enough to truly embrace.

The Slow But Delightful Death of Oregon

Oregon is a state filled with tall timber and natural beauty that once passed laws excluding blacks even before it became a state. As recently as 2016, it was still only 1.9% black, a fact which seems to absolutely torment the heroin-addled, pink-haired, hermaphroditic otherkin upper-class slumming rioters who over the past year have wrecked the downtown area of the state’s largest city, Portland. A recent poll showed that nearly two-thirds of Portlanders are hesitant to even set foot in the downtown area for fear of stepping on used needles, being shat upon, or kicked in the skull in the name of racial justice.

As is the case way too many states in the USA, Oregon’s politics are dominated by snooty urbanites who occupy less than 2% of the state’s landmass and consider those who live in the rest of the state to be subhuman, toothless, retarded, and innately violent cavemen who pose more of a danger to the public good that the aforementioned slumming rioters.

Therefore, it is with great joy that I announce that the Vikings-in-Wait who occupy Oregon’s rural hinterlands have grown tired and fed-up with being accused of ruining the state by the people who are actually ruining the state. Last year, voters in two of Oregon’s counties approved of a measure that would force local lawmakers to consider seceding from the state and joining the much whiter and much less turmoil-prone state of Idaho.

Last week, voters in five more counties approved ballot initiatives that would establish exploratory committees to research secession from Oregon in the interest of joining what is being called “Greater Idaho.” The main obstacle to this glorious and hopeful project is the fact that the state legislatures of Oregon and Idaho, as well as the US Congress, would have to approve of it, which is not bloody likely, at least not without bloodshed.

Underage Connecticut Student Arrested for Calling a Spade a Spade

As is the case with Canada, people tend to forget that Connecticut exists unless someone reminds them of its existence. I, for one, was happily ignorant that way back in 1917, The Nutmeg State passed a law making it a misdemeanor to “ridicule” anyone based on creed, religion, color, denomination, nationality, or race.

But last week, this obscure and nonsensical century-old law was invoked in the arrest of an unnamed 16-year-old white student at a high school in the 1.8%-black town of Fairfield for a Snapchat post that some would consider horrendous and others would find hilarious. The post showed a picture of a black student named Jamar Medor and featured the following caption: “Why is there a nigger in my homeroom? . . . Why is he not in chains?”

At this point in our nation’s decline, we expect students to be reprimanded, remonstrated, scorned, ostracized, expelled, and possibly even put in the stocks and flogged in the public square for doing anything short of worshiping blacks. . . but arrested?

The local NAACP successfully lobbied for criminal charges against the unnamed white student, and Jamar’s baby mama has expressed fear of “retaliation” against her nappy-headed son, because, as we all know, violence in integrated American schoolrooms is exclusively white-on-black.

To hear everyone in media, education, and government tell it, one would think America is teeming with feral whites who are so deeply up their own asses with racial identity, the growing numbers of peaceful nonwhites who only came here to fit in and get along are quaking with terror.

But a recent survey by the Pew Research Center reveals what most of us have known all along — among America’s main racial groups, whites are by far the least likely to so much as identify with their own racial group. The survey said that whereas 55% of blacks and 54% of Hispanics “see their origins as central to their identity,” a piddling 23% of Caucasian Americans feel the same way. It’s an intensely bitter irony, as well as a testament to modern white Americans’ spinelessness, that the most utterly deracinated group is consistently bludgeoned for being the most “racist.”

“White Americans are beginning to realise that they too belong to a race” is a recent headline in the Economist, a title which seems hopeful until they inevitably trot out Nazis and Charlottesville and the supposed lethality of whites being okay with being white. The article splits white America into two “tribes”: the self-hating whites that whites who don’t hate themselves hate with a passion, and the whites who don’t hate themselves but hate the whites who do. Regarding the latter group, the article suggests that many whites are trading an identification with their European countries of origin in favor of simply being white:

As America becomes more multiracial, and whites lose the status of dominant group, their sense of racial solidarity may grow and the taboo against white pride may fade. . . . Already many rural and suburban whites, who in Minnesota might have defined themselves as Swedes or Germans as well as Americans, define themselves as white. They, not Minnesota’s African-Americans, now live in the most racially segregated places of all. . . . This second white tribe thinks more like a minority than part of the country’s biggest single group. Geographic separation can lead to a reflexive bias that is different from racism in the 1950s but still lethal.

So self-preservation is “lethal.” Also in the news this week: War is peace, freedom is slavery, and ignorance is strength.

Black comedian Paul Mooney — who, like all black comedians, based his comedy strictly on being black — escaped this vale of tears and descended into Negro Heaven last week.

As one might imagine, the fawning hagiographies came pouring in, most of them celebrating Mooney’s aggressive and undying (well, until last week) anti-whiteness. An obit in mic.com said that “Mooney should be celebrated for, essentially, making it okay to make white people uncomfortable in public” almost as if black people haven’t made white people uncomfortable in public ever since black people were allowed in public.

Although the article in mic.com must be credited for making passing mention of allegations that Richard Pryor — for whom Mooney was once a chief writer and a longtime friend — once ordered a mob hit on Mooney for allegedly molesting Pryor’s son, most of the other obits bypassed this story entirely in favor of praising Mooney as a pioneer in making it cool to hate white people.

Last week made it clear that in modern America, it’s more acceptable to hate white people than to hate alleged child molesters, which is why last week was the worst week yet.