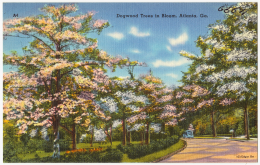 Spring has finally come roaring into Georgia, blanketing vehicles with yellow pollen and causing a sudden eruption of three-foot dandelions all across my front and back yards.

The other day I made my annual springtime pilgrimage across the street and down a hundred yards to visit the guy who knows how to separate all the moisture that has gathered in my lawnmower’s gas tank over the winter from the gasoline I forgot to drain when I tucked the machine away in the backyard shed last fall.

Even though he doesn’t ask for any reciprocation, I compensate by bringing him some of my wife’s cooking and gear myself for a minimum of a half-hour monologue from this guy. You may have met the sort of person who, even if you say, “Hey, my truck is on fire, really gotta go,” they’ll find a way to ignore what you just said and keep rambling as if what you actually had said was, “Please keep talking for as long as you can.” Plus, I feel it would be rude to simply walk away given the fact that he has once again resurrected my lawnmower from the dead.

I’ll call him Joe, even though that’s not his real name. Joe is my age but has been receiving disability checks for a few years because of chronic lung problems. His wife is nearing retirement age, at which point he wants her to stop working. He doesn’t seem to do much but sit around all day and spy on the neighbors.

He hangs on the side of his pickup truck as he catches his breath after fixing my mower and proceeds to give me the yearly neighborhood update. About nine months ago, the tiny house to his immediate right was rented by a fat black woman — redundant, I know — who I’d guess is in her mid-thirties. Shortly after she occupied the house, she was joined by her four children. And then three black adults joined them. But she’s the only one on the lease.

She arrives home from work about 4:00 AM five days a week and sees fit to sit in her driveway blasting her car stereo at maximum volume for about 15 minutes before entering the house. Joe used to cut her lawn for free but no longer does because his kindness has not been reciprocated. The eight blacks who are packed into her little shack will allow trash to pile up inside their house until they finally cram it into trash bins outside to the point where it overflows into the street and sits there for at least a week until the private sanitation company comes by and scoops it all up. Apparently, the negroidal octet has torn the shit out of the house’s insides to the point where every time the toilet flushes, the floors are flooded with water.

“I’m not a racist,” he tells me in his deep Georgia twang, “but even the cops won’t do anything to check their behavior.”

A couple of houses to his left, a Georgia cop from a nearby county was all set to rent the place, but somehow the deal fell through. About a month ago, a Chicago rapper who received a giant monetary settlement after being shot several times signed a lease on the place instead. I first became aware of his existence a couple of weeks ago one warm and sunny afternoon as I was painting the side of my house — he was sitting in his car blasting his music as loudly as he could the entire afternoon. Joe tells me that a few days ago, the Chicago rapper and two of his friends simultaneously blasted his music from three cars at once. And last weekend, the rapper and his friends threw a party that still hasn’t ended.

“He seems like a nice guy,” Joe wheezes, “and I’m not a racist, but if the police don’t do anything, I think I’m going to move. The only thing keeping me in Georgia was my mother, and she’s gone now. These lungs of mine can’t take the heat. Do you know any place that’s nice and not too hot?”

Temporarily sidestepping Joe’s question, I ask him why he feels the need to keep reassuring me that he isn’t a racist. He stares at me as if he doesn’t understand the question, so I ask him who moved in a block away with the three pit bulls that are kept out in the backyard every night and bark incessantly like cannons firing.

“It’s a black guy,” he told me. “He’s received three tickets for noise complaints, and if he gets another one, they’re going to take the dogs away.”

I ask Joe who keeps blasting off gunfire every night. Mind you, there are also some wild-and-woolly poor Southern whites in this neighborhood — the kind who don’t have the means to commit the sin of White Flight when blacks start moving in — and I assumed it was them. Nope. It’s some drug-dealing blacks who occupy a street about a quarter-mile away. Every night you hear the BOOM BOOM BOOM. My wife can never tell if it’s firecrackers or guns. I can tell — it’s guns. I don’t think they’re shooting at anyone — I suspect they’re letting the rest of the neighborhood know that they’re armed and ready to shoot should the need arise.

Joe’s compulsive need to tell me he’s not a racist even as he catalogues how blacks are destroying the neighborhood reminds me of an incident about five years ago when I was in the green room at a local comedy club on the white side of the metro area. As the headliner and I were watching the opening acts on a closed-circuit TV, I noticed that every comedian somehow felt the need to declare they weren’t racist — but in their case, there was never any subsequent “but.” You can’t make a living as a comedian these days if you include the “but.” You have to make it clear that you aren’t a racist if you don’t want to be lynched by the all-white crowd. This nation has become insane that way.

The neighborhood where I, Joe, and our new black neighbors live is only sixteen miles from downtown Atlanta, but it’s a small lakeside community you’d think was nestled far in the boondocks. It’s one of the reasons I moved here — I checked the crime rates, and they were lower than the Georgia average. Improbably twisting and hilly roads — almost like an Escher painting — surround a small lake. Big fat speckled ducks wander up from the lake and peck for food in everyone’s lawns. In the daytime, it’s so quiet that when I was first scoping out the house I wound up buying, I never saw anyone. Not a soul. I figured everyone who lived here were either retired or dead.

Then, the day after I moved in, I heard a ruckus across the street — a domestic dispute between a black dude and what appeared to be his girlfriend. And I felt that sinking feeling. The black dude owns the house that the chubby Negress and her seven cohorts are currently renting. I have no idea why he vamoosed, but maybe he could tell which way the neighborhood was heading. Or maybe he was fleeing some warrants.

Mind you, I don’t make the kind of money that would permit me to live on the affluent-and-white north side of the Atlanta area and pay child support at the same time. But I can see the graffiti on the wall, so me and the new missus are fixing up the house and aiming to move out of Georgia before the demographic undertow causes the house to lose all value.

I rattle off a few places where Joe might be happy — Chattanooga, for one. It’s less black, at least. “Too hot,” he said. Several other places were too cold for his tastes. Then, half-jokingly, I thought of the only place I know of in America where it never gets hot or cold — San Francisco.

Joe grimaces. “I’m not prejudiced or anything, but you’d never catch me dead in San Francisco.” So he’s made it clear that he’s not racist against blacks and not prejudiced against fags, even though he doesn’t want to live around either group.

I think of other friends who are about ten to fifteen years younger than me, friends who never wanted to be racists until coexisting with blacks left them no choice. One of them lives in the Atlanta area and sent me this email yesterday:

Between you and me, do you happen to know of a place where my roommate and I could reside where it’s all white people?. . . . This is my 30th anniversary of taking shit off of black people. Tomorrow will be the 10th anniversary of my brutal home invasion and assault. Two weeks ago some feral ape fired off a few rounds in the apartment below us, so my roommate is vacating. Last night the TNB [Typical Nigger Behavior] got so loud again that I called the cops, and someone helped themselves to over $200 worth of tools out of my roommate’s truck. Don’t ask how many times I’ve reported incidents to the management in the three years we’ve lived in this fucking shithole. More than every place I’ve ever lived in in my life, combined.

Then there’s the girl I know who was raped by a black man in Chicago three years ago and fled to Los Angeles shortly afterward. I advised her to get out of LA once last year’s riots started, so she moved out to Palm Springs. Neither of us was aware that the State of California was randomly dumping ex-cons and homeless people into Palm Springs, so she recently had to break a lease and relocate to a gated community because the black family below her was ear-splittingly loud and threatened her repeatedly. She didn’t want to be a racist, either.

I think I know what people mean when they say they aren’t racists: They don’t fit the media stereotype of a vicious loser who hates people with different continental ancestry from them merely to compensate for being an inadequate psychopath and to avoid taking responsibility for their own problems.

But as many “racists” as I know — the number grows daily — I’ve never met one who fits the media stereotype. Not one.

As I push my mower back toward my house to cut my lawn, I wonder how much things would change if white people merely got over their fear of what is an innately meaningless word.