Every Phoenix Needs Its Ashes 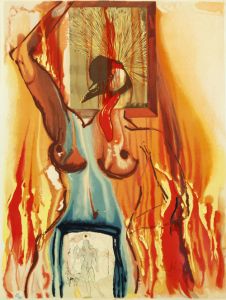 I have believed for some time that the only way the white West can be saved is disaster. I appreciate that we seem to be in the middle of one, but I will be more specific.

The West, from the eastern borders of Finland and the Visegrád 4 (V4) countries to the Californian coast, needs financial collapse in order to continue. (I am not counting Alaska as being more westerly, incidentally, as The Simpsons informed we British long ago that, along with Hawaii, it is one of the “freak states.”)

I am not an economist, but then neither are economists. If the magic money well suddenly runs dry (possibly meaning hyperinflation, economic stagnation, mass unemployment, and the resultant social breakdown) an awful lot of expensively woke projects will go to the wall, not least the “Green New Deal” in the USA. Also, should the EU welfare system break down, for example, then fewer unskilled Muslims will choose Lampedusa or Crete for their next family holiday, no matter how enticing the NGO brochure looks.

Also, and this largely concerns America, no reparations, I’m afraid. But you will have 40 acres each, because there will be plenty of land left by white flight. The mule? Well, you will have to arrange that. (Without whitey.) So, a sudden collapse will mean automatic savings, even if it is of money no one has to begin with.

Now, my prognosis of the necessity of international, bi-continental bankruptcy might not convince you of my economic credentials, but the white West as it stands will die, and although it will die in its sleep, it will not die peacefully. If it is to be reborn, then it must accept that every phoenix needs its ashes. And, if there is some sort of civil war coming (which seems likely) or international war coming (which seems even more likely), we may do well to turn to another war from the decade that largely got us into this mess.

A famous quote from the Vietnam War is attributed to an unnamed US Army officer and was made to Associated Press journalist Peter Arnett. Exact versions differ, but after the remorseless American shelling of the Viet Cong village of Bên Tre, the officer remarked that “it was necessary to destroy the village to save it.” Sadly, the same applies to the West, and the collapse is likely to be brought about by its leaders. I hope they can ride the tiger.

To turn our attention to other animals, George Orwell famously wrote in his 1946 essay The Lion and the Unicorn that “England is a family with the wrong members in control.” He was not referring to the Royal Family, whose ultimate patriarch and penultimate patriot recently passed away, leaving only his wife, Queen Elizabeth II, as the last member of Britain’s Royal Family who genuinely loves her country. No, Orwell was — I believe — on to the existence of the deep state a long time before the term was used. And the existence and function of the deep state, as with international communism, is not confined to nation-states, those entities so hated by the globalists in the EU and beyond. Like Pascal’s strange sphere (and definition of God), the center of the deep state is everywhere, the circumference nowhere. America is not the focus here, but in passing, and with Orwell’s sentence in mind, that confederation is looking increasingly like The Addams Family with the wrong members in control. Or even the Manson family.

The future of the white West in Europe is beginning to look to its geographical center. Led by Hungary’s Prime Minister Viktor Orbán, the bullish and most fiercely nationalistic of the leaders of the V4, this emerging bloc may have essentially set in motion the slow, grinding gears of European white secession. Hungary long ago opened its borders to encourage Germans who had had enough of ex-Stasi comrade Merkel and her determination to import the Third World into a country that once yearned for lebensraum. There were many takers. When your Chancellor states publicly that immigration has “no theoretical limit,” grappling with the Hungarian language may seem preferable to living in pandemonium.

On that subject, and in passing, when my own adopted country of Costa Rica was asked to take in 5,000 Syrian refugees, the government offered up to the UN what is called in British legal Latin a nolle prosequi — a disinclination to proceed. There was some grumbling from the UN, but Costa Rica politely explained that this is a Catholic country and Muslims wouldn’t like it here. (I wonder if it was also a coded message to the West that, if they hadn’t bombed Syria, there wouldn’t be all these Mohammedan refugees in the first place.) Costa Rica is not a militaristic country, as evinced by the fact that it has had no standing army since 1949 after its bloody civil war. I digress, but the country’s Muslim population is 0.01% and they are all in the capital, San José, 170 kilometers from my town. Both these figures are pleasing to mine eye, as is the fact that when the few Muslims there asked the capital’s municipality for permission to build a mosque, the request was once again politely declined. Imagine that happening in Bonn, or Bruges, or Birmingham. The Muslim call to prayer was described by Barack Hussein Obama as the most beautiful of sounds. I find it one of the ugliest purely for its implications. It is unlikely I will ever hear it drowning out the Angelus bells here.

In Latin America, this refusal to accommodate negative social capital merely thumbs a nose at the UN. In the EU, the story is very different. The V4 — Hungary, Poland, Czechia, and Slovakia — have all been intimidated, traduced, and given the full Nazification process by the unelected gauleiters of the EU. Germany intimidating Poland. How do they have the bloody nerve? The Jews may have been the cover stars of World War 2 victimhood, but a little investigation shows the atrocities the Germans visited on the Poles. And Poland is indicative of something else the rest of the West would do well to remember. World War 2 was not the Allies versus the Nazis. It was the Allies versus the Germans, who voted the Nazis into power. In a sane world, Germany would not now exist and we would all have German servants. Imagine how shiny your shoes would be. You never saw the Gestapo in scuffed old trainers. Hans, you can clean that car again and do it properly this time. Lotte, where is my dinner? Instead, Merkel is continuing the war on the West she began when a fresh-faced commissar.

So, could we see white flight from European nations to the V4? The temptations must be strong on both sides; that of the decent, white Europeans who are tired of the fact that their daughters can’t leave the house unaccompanied, their local councils are gradually falling to Islamic parties, and there is a de facto social credit system in place designed to provide covering fire for Islamisation by punishing dissent.

The other beneficiaries may be the V4 countries themselves, who stand to gain economically from such a migration. After all, this would most likely be the reverse of the situation Donald Trump accurately described when he said that Mexico wasn’t exactly sending its best across the US border. An influx of economically viable, can-do, high-IQ Dutch, Germans, Belgians, Scandinavians, and so on might put the V4 countries’ economies on steroids. Racial mixing at the right end of the bell curve worked for the founding of America, no?

Finally, an economic overload followed by complete societal collapse would necessitate a reconstruction process if the West were to be able to clamber back into the ring. And it hardly bears pointing out that, when it came to rebuilding economies and even cities, it would not be Somalis, imams, and rappers who would be doing the heavy lifting. No, that would be the white man’s burden 2.0.

Not every pile of ashes produces its attendant phoenix. Detroit hasn’t. Nor has Zimbabwe, Venezuela, or Haiti. One would hope that the West would be made of more robust human capital.

That remains to be seen, however, and the phoenix may be summoned a good deal sooner than we think.

» Are We Ready For “White Boy Summer”?