Vaccination for the “Hell” of It 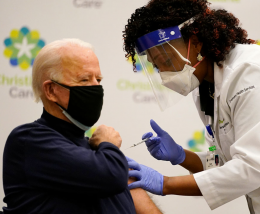 Does anyone believe that Covid-19 vaccination will not soon be compulsory for all citizens of Joe Biden’s “systemically racist” America? Going to work, sending your children to school, flying on a plane, going to a gym, being eligible for health insurance, voting, shopping — to do any of these things, and some I have not yet likely thought of — you will have to prove you’ve been officially jabbed. Since I don’t relish a future alone in a cave for the rest of my life, this sounds compulsory to me.

Don’t think it’s on the way? Okay, Gomer Pyle. There’s a Nigerian Prince who wants to put ten million dollars in your bank account as soon as you send him $5000 to qualify as a foreign recipient of the funds.

Let me offer some general thoughts about compulsion. Less of it is better. Sometimes, though, compulsion is the only smart option. Small children, crazy people, and criminals are the most obvious and appropriate targets for its application. You physically restrain your two-year-old from running out into that busy street. You lock up and sedate that guy who thinks he’s John Wilkes Booth and you are Abe Lincoln. You put Ted Bundy in “the chair” because his hobby happens to be murdering young women.

But for most grown-up, sane, law-abiding people, less is better. There is, no doubt, a subset of people out there whose members are thrilled to have their lives ordered by “superiors” to whom they consider themselves inferior. Think of the “good whites” who snap to when BLM launches its latest grievance. “What level of groveling will it take to convince you wonderful people that we are not racists?”

I’m not a member of that club. I believe most people are more productive, more creative, kinder, considerate, happier when they get to manage their own lives and worry about themselves. They resent being compelled to act against their will. They strenuously resist it. Resistance to authority imposes the social and financial costs of putting it down, which is why highly authoritarian societies typically end up with a small set of highly rich oligarchs who rule over a large mass of impoverished subjects. The resources that the oligarchs don’t allocate to themselves they spend on teaching the serfs not to complain and punishing them if they do.

Compulsion has been on a rampage over the last year. It’s all said to be for our own good. If you consider unemployment, social isolation, and fear to be good, then you can confidently proclaim that life has never been better. A tsunami of rules and regulations has washed over us. They intrude into regions of our lives, that until a short time ago, few people would have thought unimaginable. Schools, businesses, recreational facilities, and churches are choking on the restrictions. Governors and mayors make decrees so wildly inconsistent and puzzling that you have to suspect they are auguring their political futures by haruspicy — examining the entrails of sacrificed animals. One of the more ambitious autocrats, the ever-wise Michigan Governor Gretchen Witmer, sought to limit the explosive damage that might result from passenger over-capacity in the use of golf carts. From the imperial city of Lansing: “Only one golfer is permitted per cart. Two golfers can share a cart only if they are members of the same household.” From the dictatorship of the proletariat to the dictatorship of the golfers.

Perhaps they can be grateful to the Governor that they are still allowed the use of their two-woods and nine-irons.

Where is Covid-19 vaccination headed? I have very smart, well-educated friends who are urging me to get vaccinated. “The sooner everyone gets it, the sooner life will get back to normal.” “Back to normal?” When will the ten million from that Nigerian Prince hit your bank account, Amigo?

Here is how the dialogue unfolds:

Friend: “You should get vaccinated ASAP.”

Friend: “Why? The sooner everyone does it, the sooner we achieve herd immunity and life returns to normal.”

Me: “My reaction is instinctive: the more pressure, the more duress I experience from people telling me to do what is good for me, the more I push back against it. I like to be presented options with the freedom to defer and, perhaps, decline. Since these vaccines have been rushed out in record time under tremendous political pressure, I remain skeptical. We know politicians never lie to us, right? Rhetorical question. My reluctance is based on a substantial history of being lied to by ‘the establishment’ in a very big, blockbuster sort of way. How about ‘weapons of mass destruction’ from the government? How about ‘hands up don’t shoot’ from the media covering the Michael Brown story in Ferguson? How about Big Pharma? Perdue: ‘Oxycontin isn’t addictive.’ Pfizer’s 2.3 million dollar fine for false advertising (lying) about the drugs they sell? That is just a small sample. As Dennis Miller once said: ‘Washington DC is to lying what Wisconsin is to cheese.’

Forgive me. It’s just this thing I have about trusting powerful people and forces who have a long track record of deceit. I think suspicion is a healthy reaction, especially when suddenly it’s an ’emergency’ and it’s ‘hurry up, do what we tell you.’ I am even more distrustful when we are lectured non-stop about the ‘public good’ and about how much the overlords care about our well-being. The ‘war on terror’ initiated by George W Bush: when will the ‘war’ be over, and just what have we, the American people, gotten out of it so far other than miserable air travel and more surveillance?

Back to normal post-Covid-19 is in the same ‘Valhalla’ category as ‘victory’ in the war on terror. Normal is going to look much like it does right now: compulsory masking, social distancing, and rolling waves of lockdowns with CNN talking heads in their chorus of ‘The sky is falling.’ ‘Normal’ will continue with the further destruction of small businesses, massive unemployment, and the enrichment of Big Pharma, hedge fund managers, and Wall Street stock manipulators. Lots of people will get poorer and more restricted; a few will be much richer with many options.”

Friend: “So, these suspicions have made you into an anti-vaxxer?”

Friend: “But the consequences of your refusal don’t just affect you. Your refusal threatens those around you with a greater risk of infection. The state has a right to enforce compliance with procedures that protect public health.”

Me: “Really? Your argument rests on two unfounded conjectures: (a) that the vaccine will not damage my health, which would certainly have a deleterious effect on those around me and my family, (b) that unvaccinated, I would be a serious risk to others. Since I currently live a near hermit’s life and will continue to do so for the foreseeable future — in part, forced to — the infection risk I pose to others would be minimal.

For your argument I offer a counter-argument: when the state forces me to inject a substance, it has taken away from me the most fundamental right I have: control over my body. The state now owns me. I have become its property. It will do to me and with me whatever it claims will serve the goal of ‘public health,’ a concept virtually unlimited in its scope. ‘You are a threat to public health’ is the twenty-first-century equivalent of ‘enemy of the state.’”

The public health dictatorship continues to unfold with all the features that apply to dictatorial regimes: rule by decree and the bypassing of legislative process and authority justified by an emergency; vilification of skeptics and resisters; wild promises of better times ahead (someday); and elites who exempt themselves from the rules they enforce on their subjects.

The public health dictators will have no compunctions about compulsory vaccination. Expect it soon.