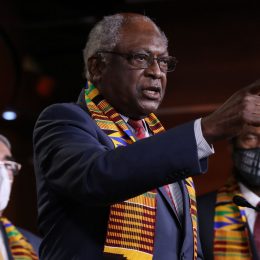 It’s fitting that Martin Luther King Day occurs so near to the hysteria surrounding the Capitol protests. The media described the protests as an attack on our sacred temple of democracy. Politicians and journalists insisted the Capitol, populated with lowlifes and reprobates, was our church. A police officer tried to persuade protesters to leave the Senate chamber because “this is like the sacredest place.” (The protesters did not listen.)

The Capitol owes its luster to its connection with the historic American nation. A visitor can wander amid the statues and portraits of the Founders and gaze up at the Apotheosis of Washington fresco under the Capitol’s dome. Millions of white Americans assign it a sacred character due to these symbols and figures. But the war on white heritage aims to strip America’s past from our institutions and replace them with figures like MLK. MLK now stands higher than the Founders — no one has to worry about him getting canceled. The warning of Senator John East, Sam Francis’s old boss, in the debate over MLK Day came to pass: we did “elevate him to the same level as the father of our country and above the many other Americans whose achievements approach Washington’s.”

MLK is the chief deity of America’s new state religion. Blacks are now our gods and the state is making this more explicit in the wake of the Capitol protests. Your humble writer covered this phenomenon last summer following the George Floyd riots.

Blacks. . . are America’s gods. Their lives matter more than others, their feelings are a national concern, and their misdeeds go unspoken. They require respect at every turn and we must place them at the center of our history. They’re superior to whites in every regard — athletics, music, dancing, humor, and especially in virtue. Their women are even magic! Blacks have an entire month where we worship their invention of peanut butter and the super soaker.

The temple has only grown in stature since then. The regime wants to make it clear that state and religion are one and the same. To show your love for the new America, you must see blacks as our true founding fathers and accept them as superior beings. They created and uphold our democracy. Without them, America would perish from the Earth. This is the regime’s credo and failure to accept it could make you an enemy of the state. Just look at the poor Trump supporters facing years in jail for walking through the Capitol without permission. They desecrated the sacred temple — built by black people — in the belief that black votes shouldn’t count. Even though none of the protesters demonstrated in favor of white supremacy, they’re branded as white supremacists. This is just one of the many labels contemporary heretics earn.

After George Floyd’s death, the more zealous black worship was mainly relegated to the private sphere. The state had not yet imposed on the people. With a new administration, the state no longer has any reason to hold back.

The first thing we may receive is the replacement of “The Star-Spangled Banner” with the “black national anthem” “Lift Every Voice and Sing.” This isn’t just the proposal of a starry-eyed columnist or backbench Democrat. Majority Whip Jim Clyburn, the third-most powerful Democrat in the House, proposed making the black national anthem our national hymn. It wouldn’t replace our current national anthem, but stand aside it. Some sports leagues already play it alongside “The Star-Spangled Banner,” even though most Americans had never known there was a black national anthem until Floyd’s death. Clyburn claims most Americans know and love the song, which is not true at all. He also believes that the song will bring national unity and heal our deep divisions. The majority whip’s argument assumes that only black worship can bring us together. Unlike “The Star-Spangled Banner,” “Lift Every Voice and Sing” doesn’t offer romantic nationalism. It insists we have a “dark past” we must overcome, a shared sentiment with the current American regime.

While Clyburn doesn’t want to replace the national anthem (yet), it could very well be done in the near future. “The Star-Spangled Banner” was written by a slave owner and is regularly called racist for celebrating the bad old America. The calls for it to be abolished could come quick and swift with just one public debate over the national anthem. “The Star-Spangled Banner” doesn’t uphold black worship, which is problematic for our regime. A new anthem would be called for to ensure the citizenry stays loyal to state ideology. Just imagine millions of Americans taking off their caps, putting them over their hearts, and belting “Lift Every Voice and Sing” before the big game. Nobody would be allowed to kneel for that.

We also may be treated to a public debate where we’re told that blacks are, in fact, superior beings. Joe Biden’s pick to lead the Civil Rights Division of the Department of Justice, Kristen Clarke, previously argued for black supremacy. As a Harvard student in 1994, Clarke claimed there were inherent biological differences between the races and this explains the cultural differences between them. That’s pretty based, but she relied on totally quack black race science to make her point. She argued that “melanin endows Blacks with greater mental, physical and spiritual abilities — something which cannot be measured based on Eurocentric standards.” Indeed, this can’t be measured by Eurocentric standards, or by any other standards besides black girl magic.

These arguments would have doomed a nominee during the Bill Clinton and Barack Obama administrations. Past Democrats realized it was bad to associate themselves with radical black activism, even if they sympathized with the cause. That’s not the case anymore. You could see Clarke briefly apologize for those statements and we would never hear about it again. Minnesota Attorney General Keith Ellison, a former DNC vice chair, never has to worry about people bringing up his past support for a black ethnostate. Black nationalism is considered uncouth, but it doesn’t get you canceled. We could also witness the bizarre spectacle of Clarke defending her statements to the applause of her party and the media. Whose place is it to claim that blacks are not superior to whites? Our whole culture preaches black superiority daily. Why shouldn’t Clarke own up to it? It’s not like any white lawmaker — whether Republican or Democrat — will challenge her thesis. Her confirmation may be the moment the regime officially declares blacks are mentally, physically, and spiritually superior to whites.

The system certainly sees blacks as more loyal servants than whites. Even though most of the police officers who “defended” the Capitol from Trump supporters were white, the media has pedestaled one lone black officer as the defender of the Capitol. Eugene Goodman became a national hero due to one viral image of him telling the Trump mob to stop. For this act, he was touted as the savior of democracy, the one guardian who didn’t leave his post in the face of a white supremacist mob. Unfortunately for this myth, a video exists of Goodman quickly fleeing from the mob after the viral image was snapped. So much for the stalwart guardian of democracy. He will receive the Congressional Gold Medal for his service, something that white officers who did far more won’t obtain. The myth of the black guardian is fundamental to our state religion. They can’t allow facts to get in the way. Goodman is now the bravest foot soldier of the regime, and no one can question that.

At the same time, white police officers and soldiers are seen as fundamentally disloyal. Black Capitol Hill police complain that their white colleagues are racist and the department needs far more diversity to protect our sacred temple of democracy from fantasy white nationalist threats. Our military subjected National Guardsmen deployed to DC to loyalty tests to make sure they don’t support Trump. Some lawmakers demand that only non-white soldiers be used for such a purpose because we can’t trust white males. They need to be drummed out and the military needs even more diversity to establish total loyalty.

And the Biden presidency hasn’t even started yet.

America’s elites want our national institutions respected. But the symbols and history used to earn that respect are too problematic now. They have to foist new symbols, myths, and history to secure legitimacy in the eyes of cultural elites and bamboozle the masses into acceptance. Black worship replaces the civic nationalism of the Cold War era. The Founding Fathers don’t matter anymore; what matters is blacks. They are the true Americans, the national divines, and the guardians of our democracy. We must kneel before them to show our loyalty.

» L’Etranger to Himself: Race & Reality in Albert Camus’ The Stranger