The Other Face of Terror 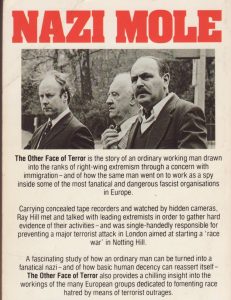 I came to realize there was a common motivating factor. It was hatred.

Ray Hill’s corpulent face and receding hairline fill the screen. He plucks a membership card for the secretive Column 88 out of an outsize jacket pocket, his drooling mouth quaffing a beer as his earnest interviewer lights the tip of his swirling cigarette. The audience is suddenly subjected to flashing images of burnt synagogues, swastika-daubed walls, the bloodied faces of Southeast Asians — and then Hill claims, rather portentously, that members of the Extreme Right in Britain are attacking Pakistani corner shops and “are proud of it.”

Moments later, an intrepid Hill is knocking on the door of a young Vietnamese gentleman, who lives on Rue Morice in the Clichy district of Paris. The man apparently offers our hero the opportunity to purchase a .44 Magnum or to take his pick from six semiautomatic weapons. Then, Hill, during his debrief outside, identifies the guns in the flat above as being similar to the Sten Guns he used during his army days. The narrator’s voice-over opines in a scaremongering tone:

His friends in the Extreme Right movement in Europe possess guns, ammunition, and explosives and they use them to injure, maim, and kill men, women, and children for the sake of violence and in pursuit of political goals, creating terror and spreading their propaganda of hatred. . .

Cut once again to Hill, this time sitting in front of a Union Jack in close proximity to the chairman of the British National Party, John Tyndall. This quickly segues into some old, grainy footage of Jean-Marie Le Pen describing immigrants as “living at the expense of the French working population,” a rather heavy-handed example of guilt by association. The narrator concludes that Hill’s recruitment activity for the British Movement targeted “the unemployed and disadvantaged white youth.”

The pastiche continues with secret footage of Hill, representing the British League of St. George — a group that the narrator describes as an elite Nazi club — carrying a flag at the Diksmuide rally in Belgium in 1980. The filmmakers completely overlook the very visible presence of the bearded Steven Brady, the League’s European Liaison Officer in the foreground, which in retrospect was a massive missed opportunity at the heart of their hit-piece.

The film’s focus, rather, was propaganda. It covers inflammatory and politically counterproductive speeches by the “wild men of the Extreme Right,” people like George Gateau, the Editor of Militant Magazine, Michel Faci, the deputy leader of the Federation d’Action Nationale et Europeenne (FANE), and Ian Souter-Clarence, the former SAS major who was then the head of the military wing of the infamous British Column 88. The narrator explains:

These men all play political double-acts. On the outside, they preach pseudo-respectable Right-wing politics, but in reality, they are violent racists, and above all, anti-Semites.

The latter charge is obviously the most significant in the minds of the producer. It’s emphasized by the pro-Zionist Searchlight investigators handling their self-identifying “sleeper agent” Ray Hill, and by the Anti-Defamation League’s Irwin Suall, who is interviewed about Saudi money financing the Extreme Right in Europe and America.

Using their surreptitiously obtained film, the filmmakers take great pains to capture for posterity and quote extensively from each of the aforementioned firebrands in turn, as if they and they alone were the spokesmen of that entire generation:

Certainly the French, the Flemish, the Spanish, the Americans, the English. . . All these white nations of our race who have succeeded in building the civilization we know have a battle, a total war to fight against the merciless enemy.

The nationalist revolution. . . a revolution which will see a united, white Europe. . . cleared of all the parasites that now poison her. . . that is to say, the colored immigrants, freemasons, and the Jews. . . That Europe of honor is already present in my heart.

When the day comes in the future when Europe is threatened, then we in our turn will defend our common soil.

Hill is trying to paint us a picture of unadulterated “hate.” We’re shown — at length — a black-and-white photograph of Tony Hancock, a printer involved in producing publications like Bulldog and Arthur Butz’s The Hoax of the 20th Century (1976). The production team subsequently reveals the location of his press in Sussex, which was later firebombed by antifascists.

Searchlight and their “useful idiot” Hill then gallop ahead at some pace, linking British patriots — nevermind how tenuously or erratically — to a laundry list of violence, including:

Hill suggests — by now obviously stretching credibility — that these men belong to a world-wide Neo-Nazi underground that includes the spectral Klaus Barbie, the “Butcher of Lyon,” who was “snatched” from his sanctuary in Bolivia to face a controversial trial in France, and the rather ridiculous and foul-mouthed figure of Tony Malski. The latter drunkenly asserts that he could put a thousand fully-uniformed members of his National Socialist Movement on the streets of London at the “drop of a hat.”

Malski is then honey-trapped by Hill into considering planting a suitcase bomb at the very epicenter of the West Indian Notting Hill Carnival in Ladbroke Grove, an unforgivable act that would have set the Right in Britain back decades — which is the deliberate strategy that Hill and his controllers leaked to the Daily Mirror for a full front-page expose.

So, with his job done and his paymasters satisfied, Hill walks off into the distance with Bob Marley’s “Redemption Song” playing us out.

The narrator repeats the question originally posed by the investigative journalist: “Why are you doing this?”

Hill insists, even as the Judas coins rattle in his pockets: “To try and point away kids who are dragged into this sort of thing for their own good and the good of society . . . and if I can stop just one or two being drawn into this sort of evil, it will be worthwhile.”

It concludes a salutary tale of misrepresentation and exaggeration that is unfortunately repeated time after time. It rather raises the question: will we ever learn?

« Counter-Currents Radio Podcast No. 303 Millenniyule, Now More Than Ever