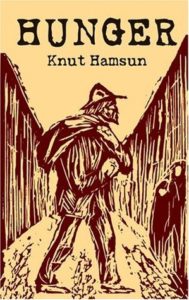 Oh, what strange freaks one’s thoughts are guilty of when one is starving.

Back in my misspent youth, I took a seminar on creative writing. One of the instructors gave the class a piece of advice which I never heeded. She said that if you want to be good enough at writing to make a living at it, don’t be good at anything else. While I avoided the privations and loneliness such a life would necessarily entail, the unnamed first-person narrator of Knut Hamsun’s classic novel Hunger apparently did not.

Published in 1890, Hunger tells the semi-autobiographical story of Hamsun’s days as a penniless and starving writer. And starving is meant quite literally here. The novel chronicles a young man’s wandering through a Norwegian town called Christiania where he scrounges for survival while pleading with his muse for inspiration for his next newspaper essay. There is little plot to speak of, and the protagonist unwittingly isolates himself from family and civilization as his gargantuan emotions and ideas violently clash with his bourgeois pretensions and post-Christian outlook. The story lacks the typical beginning, middle, and end. Instead, it seems to start somewhere in the middle of the middle and ends somewhere in the beginning of the end. We have to figure out the rest. Perhaps this is why Hunger is considered “modernist.” In it, one can easily find antecedents to James Joyce’s A Portrait of the Artist as a Young Man, Franz Kafka’s The Trial, and Albert Camus’s The Stranger. On the other hand, Hunger is about as modernist as Dostoevsky’s 1864 novel Notes From Underground, which also subsumes plot within an unnerving depiction of a man’s troubled mind.

Yet there is a plot to Hunger — at least one designed to make the reader want to know what’s going to happen next. The suspense revolves around two questions. Will the protagonist eat? And, will he write? Survival is in the balance here, and those of us who have had at least to hustle for our survival will appreciate the protagonist’s near-constant physical suffering and mental anguish. It is a testimony to Hamsun’s skill as a novelist to make us care about such a threadbare character. Hamsun doesn’t even give us more than a vague idea of what his protagonist is writing or trying to write — for example, a treatise on Kant or an allegory about a fire in a bookshop. Yet because the protagonist puts such effort into presenting his ideas, we believe him when he considers them profound. Somehow, we care.

Thoughts came so swiftly to me and continue to flow so richly that I miss a number of telling bits, that I cannot set down quickly enough, although I work with all my might. They continue to invade me; I am full of my subject, and every word I write is inspired.

I am very hard to please when it comes to novels, yet Hamsun never caused me to lose interest. How he does it, I can’t say. Mystery is crucial in all art, and usually in the narrative arts, this mystery involves character, plot, or dialogue. Why was Ahab so fixated with the White Whale in Moby Dick? Why did Stavrogin do what he did at the end of The Possessed? What did the Misfit mean in the last line of A Good Man is Hard to Find? I don’t know. Essays answering these questions would be fun to write (and hopefully read) but in the end, we would all just be spitballing.

The mystery behind Hunger entails the inner life of genius. How does a person survive when burdened with phantasmagoric embodiments of ideas as well as emotions as real as brick and mortar? What are his thought processes? Will he ultimately be able to contribute meaningfully to society? Or will his suffering cause him to slide into madness?

How did I look in reality? It was the very deuce that one must let oneself turn into a living deformity for sheer hunger’s sake. Once more I was seized by fury, a last flaring up, a final spasm. “Preserve me, what a face. Eh?” Here I was, with a head that couldn’t be matched in the whole country, with a pair of fists that, by the Lord, could grind a navvy into finest dust, and yet I went and hungered myself into a deformity, right in the town of Christiania. Was there any rhyme or reason in that? I had sat in saddle, toiled day and night like a carrier’s horse.

I had read my eyes out of their sockets, had starved the brains out of my head, and what the devil had I gained by it? Even a street hussy prayed God to deliver her from the sight of me. Well, now, there should be a stop to it. Do you understand that? Stop it shall, or the devil take a worse hold of me.

This conflict should matter to all of us because geniuses like Hamsun’s protagonist can see what the rest of us cannot see. They lack the instinct for comfort and self-interest, and therefore have fewer biases separating them from reality. At times, they live almost like animals because what they see and what they feel are a real as money and as sharp as love. And having neither, they are forced to scrounge to survive. They can’t help it, just as the rest of us cannot help despising them or feeling sorry for them as they babble to themselves walking down the street. Most of the time, such poor souls really are insane, but Knut Hamsun reminds us that oftentimes, they are not. And we may well ignore them at our peril.

No, no. Kant got it all wrong about philosophical cognition, you see. And those books you see burning in that bookshop? Those aren’t books. Those are human brains.