Google is a Dirty Word 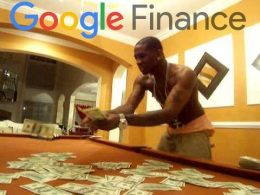 The Alphabet Company, the parent of Google, has a market capitalization of $991.53 billion, which is about the same size as the nominal gross domestic product of the Netherlands. Chrome accounts for 68% of the global desktop browser market, a hunk of software that gobbles up RAM in order to share your information with the entire Internet as efficiently as possible. The company’s fresh tendrils sneak their way into just about every facet of globalized life, dominating the digital ad industry with 32% of the market. Google, Facebook, and Amazon together comprise 70%. Google, of course, also owns YouTube, the video service that 95% of the Internet uses.

We know all of this, of course. If you’re among the many that associates with the Dissident Right, you are certain to have noticed — like the many things we notice — the omnipresence of Google and its various subsidiaries on the Internet. We’re all-too-familiar with just how Google chooses to exercise that authority, as well; the most recent example is the rather brazen, at least by 2019 standards, demonetizing of ZeroHedge and threatened demonetization of The Federalist from Google’s ad networks. The reason for this?

Well, it’s a little murky. If you ask Google, it’s about the comments section on The Federalist, and some sort of breach of nebulous “terms of service” with ZeroHedge; a random hapa journo-activist seems to think the two sites are propaganda outlets, and her story continues to be retconned in real-time on account of its egregious errors and uncovered conflicts of interest. We live in a post-truth age.

The NBC reporter hardly seems objective! This was just deleted but I took a screenshot. pic.twitter.com/LcB4dprR5s

Google’s alleged decision to censor based on user comments is mildly alarming, since the message seems to be that popular discourse can be knocked off at will. In the Hedge’s case, Google’s issue seems to be with opinion editorials shared on the site, a medium with an implicit disclaimer attached to it — though it is trendy to ignore such things these days. The mask is off, so to speak, and Google and other Silicon Valley leviathans no longer have to pretend they have our best interests anywhere near their hearts or pockets.

ZeroHedge is an interesting choice of targets. There are many, many more sites out there posting much more inflammatory content. The Hedge, in my perspective, sticks mostly to financial news with a heavy dose of skepticism and occasional conspiracy-mongering on top, which is a fairly decent angle for a large internet news site to harp upon. Largely libertarian — of seemingly Austrian extraction, really — Hedge was never a website that even crossed people’s minds when discussing racial issues. Was the site implicitly white? Of course it was. Just about any popular news source or social movement on the edgy libertarian-conservative side of the aisle will be dominated by whites practicing white advocacy by other means, even if many of them don’t realize it. That makes this whole incident even more concerning. You don’t even have to fedpost for the banhammer to come down upon you these days.

Counter-Currents is familiar with these sorts of shenanigans. While ads have never run here (we’re just too high brow for that), Counter-Currents relies on search engines linking to the website for a large portion of our traffic. This is true of almost every non-social media website, whose users will typically visit directly. In recent months, Dr. Johnson has observed articles by him and other authors slowly creep down the list of results when relevant queries are searched; articles that formerly had staying power were buried beneath endless entries of irrelevant bullshit.

We know that Google is capable of these things because it has been prosecuted for them before. Back in 2017, such a case was appealing to Eurocrats because it gave them an opportunity to flex their performative anti-trust muscle. These days, going after a giant monopoly for silencing those racist meanies online isn’t a cause that’ll gain you new friends. We don’t have anybody in government on our side, so it is time that we take matters into our own hands.

Google cannot be allowed to control everything. This status quo is obviously bad for many reasons, including to many normies, because most private oligarchies aren’t generally conducive to good outcomes. To us, however, Googleization is an obvious existential threat. We clearly cannot trust a massive tech conglomerate to be impartial in how they engage in business, and public eradication of our aims and voices are already a one-way ticket to profit in the United States. The incentives present in the country dictate that we separate, rather than continue to hope we won’t be crushed.

For starters, I strongly advise you switch away from using Google as a search engine. It’s likely that many of you have already done this, but ditching the Goog for good can be a painful process. Much of what we see in Google search results are informed by our past browsing history, so the things you see will be highly tailored and often very useful. This seemingly rich search experience can make other options appear unappealing, since they lack the same big-data tweaks and personal pandering that a Google search boasts at its core.

Recognizing this disparity in “quality,” however, is also admitting that the internet you engage with through Google is not truly the internet as it is; you experience information through a medium of algorithms and interventions. Such a veil can easily be used to isolate you inside of an easily-identified echo chamber which can then be publicly discredited or even shut down. Think of it like herding cows; prod them all in the same direction until every last one is in the same spot, then let the slaughter begin.

An “unenhanced” search experience carries none of these risks. Information cannot be buried, and biases cannot be reinforced to nefarious ends. There are several options available to those looking to make the switch. My personal favorite is DuckDuckGo, owned and operated by a certain privacy-obsessed Gabriel Weinberg (I make no claims about his ethnicity). DuckDuckGo operates on one of the leanest search engine algorithms ever, using an open-source model based on the very first incarnation of Google. Two users of the site searching for the same query will receive the same results, uninfluenced by geography, history, or ideology. As far as Weinberg goes? We may just have to wait and see. Other options include Ecosia, which plants trees for your searches.

I also advise you turn your attention to Chrome, which I would be willing to bet a majority of this site’s fine visitors use for their browsing needs. There is its aforementioned RAM issue — a matter of mere usability — the keylogger built into it by default [chrome://predictors/], and the litany of egregious security problems, some of which are specific to Chrome, detailed by the good people over at GNU. I could elaborate further and discuss botched 0days and various other bits of insanity present in Chrome, but to do so would be unnecessary. Google’s actions for at least the past decade have been prime examples of. . . Googling.

Such behavior is so inescapably linked to the business practices of the company that to refuse to associate it with the conglomerate itself borders on dishonesty. Google is dependent upon manipulation to survive, for without it, its incompetence and its uselessness in the face of more robust and redundant services would be made apparent to the entire world. We ultimately do not need Google for anything; Google needs us in order to keep their bloated operation afloat. Absent boogeymen, big data, and bluster from those in charge, there would be no reason to visit the site ever again.

In a sane world, Google and various other Internet companies would already have been nationalized. Ideally, these companies never would have grown to such a point that this conversation would be necessary, but to look backward is to be blind to the future. We know that nothing will change in technology for at least as long as Donald Trump is in office, and to pretend that things will get better before they get worse is the mark of a man who lacks foresight. ZeroHedge was just demonetized. How long before it disappears from listings, period?

So, I suggest we get serious, and leave the beast behind. There’s much more at stake than your YouTube recommendations.