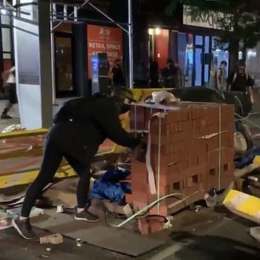 There is a fascination with seemingly random piles of bricks showing up at benefit balls in major cities across the United States. To the eagle-eyed observer, pallets of blunt objects appearing in the line of planned marches and gatherings is just a little too convenient — and concerning — to brush away as a coincidence. The phenomenon has been observed, mostly by those in attendance at these “peaceful gatherings,” in Dallas, New York, Boston, and indubitably other places that haven’t received as much traction on Twitter.

The people informing us of these “bait bricks” aren’t exactly sympathetic types. The Dallas man is a protestor, and in the case of the Boston man, some kind of Trump-supporting rapper. (Twitter is a weird place.) The New York Tweet came directly from the police department itself, which immediately raises questions about the video’s credibility. Can we trust any of these people and their often wildly different narratives about the magic flagstones? The events of the last week have made deep rifts in American society visible once more, and violence underscored them. These magic bricks and who is placing them aren’t that important, in the grand scheme of things. There are traps laid for us in every direction that these peculiar dead-drops are discussed — accusing “antifa” radicals of placing them is a convenient way to pass the buck of violence back onto whitey, and to suggest it’s the act of the police or state in order to legitimize greater use of force against the protestors seems rather unlikely. We know what the police force of each city is willing to do, because they’ve done it every night for the past two weeks.

Consider the position of the protestor. Any action taken against them by the police will be decried as fascism incarnate, brutality, the whole laundry list of offenses. It is important to bear in mind that almost all Black Lives Matter protestors are in favor of complete police abolition; to them, their enemy during these tumultuous times is inherently illegitimate. To that effect, it is difficult to determine what’s factual and what’s ideological about their narratives, as they have every reason to paint all police action as violence.

Now, consider the position of the people in charge of these cities, and of the police enforcing curfews. Almost every leader facing riots in their cities has paid some kind of lip service to the Black Lives Matter movement or against “injustice” broadly. They also insist upon peace, or some variant of it. Most haven’t called in the National Guard, New York being a prime example. As the mayor of a Democratic-voting city, one has to play a sketchy game of maintaining some kind of order without alienating your coalition of minorities and your (often) mostly white constituency, many of whom would balk at any kind of constructive action being taken to quell mass civil unrest at their doorsteps.

The solution, in this case, is to let the situation simmer.

I must confess these protests have become much less entertaining in the last few days. Where before there was always some kind of hilarious or dramatic event happening every night, there is now a tepid protest, some uninspired looting (when will they hit Fry’s Electronics?), and then the whole thing gets shut down at around 1 or 2 AM. This is true of semi-well-behaved cities; in places where things actually got out of hand, the situation resolved to this arrangement within a few days. If you allow this unrest to chug along at an even clip, it means that there’s a lot of room to peddle misinformation, make symbolic concessions, and otherwise tire out these people. The energy seen in Minneapolis the first two days, with its glorious blazes and post-apocalyptic mornings, cannot be sustained without some kind of constant galvanizing force. It is that force these protests lack by virtue of their demographic whackiness and general disorganization.

In a sane society, this unrest would not have happened — and even if it did, it would either be put down with a vengeance or the grievance in question would be so outrageous that the situation would have flashed into a proper civil war by now. Nobody in charge actually wants this. The United States is functioning much like an empire would — there is cold, hard Realpolitiking going on out in the streets of America. It may seem as though there’s some kind of civil war brewing, especially when you consider the seemingly diametrically opposed viewpoints of the news media, large corporations, and the President. Even then, this semi-apparent solidarity is more a deck played in the culture war than any substantial action; something that a lot of people are noticing. This is no consolation, though. Even if companies and mayors don’t tangibly support this cause, they’re still complicit in distorting culture, and they don’t even have a good reason for it beyond attempting to scrape up some feel-good bucks with their virtue-signaling.

Let’s get back to those bricks.

The general reaction to them has been outrage. No matter who is being accused, and no matter who is doing the accusing, the common thread is a (nominal) opposition to violence. You can hear the same denouncements in the mainstream media, by public-facing BLM speakers, by the President, even by police officers (who often take a knee for the photo op, then go back to doing their job moments later.) If you ask the average Leftist, these bricks were staged by either police or white supremacist boogeymen looking to spur violence. If you ask the Jew-approved “Right,” these bricks were staged by Antifa boogeymen looking to spur violence.

There’s just one problem with that. Violence doesn’t occur within a vacuum. These pallets of bricks have shown up because someone is willing to throw them. We know someone is willing to throw them. Be disgusted at political violence all you want; but the fact of the matter is that the United States is no longer a sane society, and no matter your political affiliation, the temptation to resort to insane tactics is hard to resist. Hand a well-adjusted man a gun and tell him to shoot, and he will hand it back to you. Hand a man with a grudge a gun, and you might bear witness to murder.

A common expression among geopolitical commentators (and other charlatans) the world over is that someone, or some group, has “exploited” ethnic or religious tensions. Someone has capitalized, galvanized, stoked, what have you, some kind of conflict that this commentator would like you to believe doesn’t exist. Conflict cannot be conjured up out of anywhere, though. When told that the civil war that tore his homeland apart was due to American intelligence “exploiting” tensions in the Balkans, our own Nicholas Jeelvy reminded us that these tensions had already spelled conflict for decades, the Americans be damned. If there is some kind of “fault line” to prod at for political ends, such fault line was already extant. It’s difficult to incite war among people who don’t have any reasons to bicker with each other.

Well, Americans have a lot of reasons to bicker with each other. We’re also being denied a much-needed split from each other owing to some irreconcilable differences. We’re being denied this by our government, global corporations, and some less-than-effective “protest” leaders, all because the American Empire is a pretty goddamn profitable machine to run and they don’t want to let go of the reins just yet. Virtue-signaling in favor of BLM is appeasement, and a step closer to a white-dispossessed banana republic where rents can be extracted on the altar of inclusiveness and post-colonial reparations. Nobody should be shocked that there is fighting in the streets, and that some boys are loading up on guns (and bringing their friends.) If we can’t even pelt each other with bricks until a gentleman’s agreement can be brokered, then what do we have to resolve our conflicts?

The stated goals of Black Lives Matter are substantially about the need for black people to be responsible for and care for their own. In their eyes, whites have been brutalizing oppressors. I’m not one to deny another person’s lived experience, even if I think that they’re wrong — I just propose we call it a day and stop the madness now, and decide that multiculturalism is a mistake that will inevitably lead to resentment and anger.

The Turn of the Screwed »