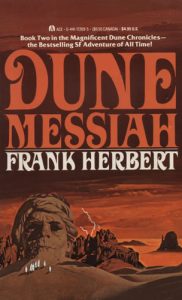 John W. Campbell, editor of Astounding Science Fiction magazine, rejected Dune Messiah because he did not like the transformation of Paul Atreides, the hero of Dune, into a sulking anti-hero buffeted about by forces beyond his control. But this is not a problem for me, because Paul’s reversal of fortune is a necessary outcome of the basic plot elements of Dune. In Dune, Paul Atreides’ final step toward becoming a superman and conqueror is to acquire the power of prescience. He can see the future. But to see the future is to become imprisoned by it.

» Counter-Currents Radio Podcast No. 269
The Sublime & the Grotesque