The Ugly Truth Behind Beauty 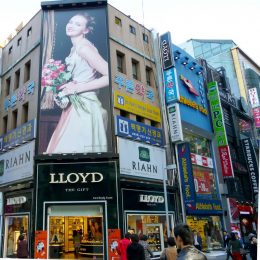 It was tempting for me to write off this opinion piece from Elle as lightweight, semi-feminist pap. That, of course, was my first thought, judging from its precious and angst-ridden title: “There’s Nothing Effortless About Being A Woman — And I’m Done Pretending Otherwise.” Not surprisingly, reading the article did reinforce this impression. However, I don’t believe we should write it off entirely because the author, one Amy S. Choi, whether she realizes it or not, touches upon fundamental truths about women, beauty, and race.

Choi begins by lamenting the effort it takes for her to keep up the sham of being “effortless.” That is, achieving a kind of feminine beauty and grace without making it seem as if she had worked hard to achieve either. It’s not enough to pretty; it seems one must make it look easy as well. After disclosing the indecent details of her biannual spa visit in Manhattan’s Koreatown, Choi chronicles her nightly ritual in the bathroom:

This is just the beginning. This is so I can then go to the multitude of beauty stores on Thirty-Second Street and literally buy snail smegma to smear on my face every night, after washing my face twice with two different kinds of rice oils, toning, then adding some sort of ginseng brightening serum, then slapping on a collagen cream.

She then provides a long list of all of her cleansers, oils, de-oilers, whiteners, and other no-doubt highly overpriced concoctions in her medicine cabinet before bringing home her article’s ironic motif:

Why? The key is to be only imperfect enough to be charming, so that I can say, “Oh, I don’t really wear makeup. I’m pretty low maintenance.” So I can be the kind of lady that is effortless.

Yes, this sort of thing has been expressed before. Yes, this article is meandering and undisciplined. Yes, it reeks of estrogen. Yes, these are first-world problems expressed by a seemingly affluent and solipsistic first-world woman. Choi, however, makes it interesting when she generously salts a few autobiographical details with gratuitous profanity and reveals how she’s been haunted by this specter of effortlessness her whole life. It has a lot to do with three facets of her as a woman. She’s not terribly pretty (by her account), she’s obsessively body-conscious (by my account), and she is of Korean descent. These three elements seem to have created a perfect storm of torment in this young woman’s mind which forces her to agonize over whether she’ll shape her eyebrows with a pencil, a brush, or a microblade every morning.

About her 1980s childhood in the “verrrry white Midwest,” Choi writes:

I absorbed it all: the need to succeed and the internalized judgment of how we did so; the love of who we were and the not-wanting-to-be-weird-in-front-of-white-people; the need for the linguistic cues of my Americanness to appear effortless, to show that it was natural to me, even though English was my second language. Internalized white supremacy is a real trip, lemme tell you.

So here we are. I am basically programmed to be wildly, savagely proud, and also always a little bit ashamed. I am groomed to always cultivate the appearance that I belong here, that I am beautiful, and that this is how I was born to be. That this is all effortless.

I AM LIVING A LIE AND I AM SO TIRED.

This is a profoundly unhappy woman who seems only a fraction as honest in real life as she is with the Elle readership. It seems to me that part of her trouble stems from growing up as a racial minority among people who are, in effect, genetic strangers. Of course, this makes balancing identity with assimilation extremely awkward. Of course, a young body-conscious girl is going to develop hang-ups in such a situation. It’s tough enough just being a regular kid. But because her parents decided to (or were forced to) uproot themselves from their ancestral homeland and set out for the West, young Amy Choi had to deal with an additional, and I am sure quite heavy, burden: living up to the unmatched standards of white feminine beauty.

Choi’s comment about “internalized white supremacy” is quite telling. Judging from looks only, white women are, on average, the most beautiful, the most attractive, and the most desirable women in the world. This fact is obvious to anyone with a pair of eyes, and one day it will be scientifically proven if it hasn’t been already. This is not to say that beautiful non-white women don’t exist. Of course, they do. But there are fewer of them, and they are always held up to the standards set by white women. This is one reason why non-white immigration is a lose-lose proposition for white men. It forces white men to compete with non-white men for the attention of white women while finding the charms of non-white women far less enticing in comparison.

You can buy Spencer Quinn’s novel White Like You here

It’s the ugly truth behind beauty. But is it racist to say so? Well, is it racist to state that East Asians are the best at math or that Sub-Saharan Africans make the best sprinters or that Jews produce brilliant classical violinists? [1] If not, then why would it be racist to state the obvious connection between white women and beauty? It would seem that denying this obvious connection — or, better yet, attempting to refute it with an apothecary’s worth of beauty aids in your bathroom every night — would take a lot of effort.

Choi seems to realize this too, and is so wrapped up in anguish that she lets her grammar go a little bit and forgets to put a question mark at the end of a question:

How much more useful, how much more joyful, how much easier to actually be truthful, to celebrate our efforts, to create communities around our desires and not fucking live with the shame that the desire for effortlessness brings, for women, and for immigrants, and for people of color who may never fit into a white, Westernized standard of beauty.

Well, this is because the “white, Westernized standard of beauty” is real. It is objective, and it is powerful. I feel it when I am in the presence of beautiful white women. If standards like these were fake, would women like Choi even take them seriously? Would they obsess over them to the point of becoming miserable despite living in an affluent country? [2] Better yet, do white scientists sweat bullets over the prospect of living up to black standards of scientific accomplishment? No, because black standards of scientific accomplishment, like non-white standards of beauty, are in fact lower than their white counterparts. [3] To say otherwise would be a lie — and we all know how Amy Choi feels about lying.

But it’s not just about beauty for Choi. She makes it clear that it is also about fitting in. Young girls of Polish or German or Italian or Norwegian descent don’t have to worry about “internalized white supremacy.” They are already white. They have a head start when it comes to fitting in. It’s only natural. But for an outsider like Choi, fitting in takes — again, that word — effort. Lots and lots of effort.

I am groomed to always cultivate the appearance that I belong here, that I am beautiful, and that this is how I was born to be.

Sadder words have hardly been written. I am reminded of Vox Day’s dictum that Social Justice Warriors always project. Amy Choi is projecting here — or, really, is quite admirably stepping outside of herself to reveal the bogus image of herself that she projects onto others every day. As such, with everything she writes above, the exact opposite is true: She doesn’t belong in the West. She isn’t beautiful. And no, being a beauty-obsessed, hard-swearing, self-absorbed, would-be it girl is not whom she was born to be.

Amy Choi says she’s done pretending. For her sake, let’s hope so. But let’s also hope that once the pretense is all gone, she’ll realize that multiculturalism is in large part to blame for her misery. If it had been possible for her parents to have never left East Asia, most likely she would have grown up in a place where fitting in would have been easier and living up to unreasonable and alien standards of beauty wouldn’t have entered her impressionable mind until after she was mature enough to deal with such pressures.

And then she could have put all her effort into what really matters in life: being happy and honest with oneself.

[1] I know we don’t often praise the accomplishments of Jews on this site, but I never knew what Brahms’ Violin Concerto was supposed to sound like until I heard Jascha Heifetz’s 1959 recording of it with the Chicago Symphony Orchestra, Fritz Reiner conducting.

[2] Here is Choi’s hyperbolic description of her own misery:

Because, of course, I am relaxed about literally nothing. I am effortful about everything, and it extends far, far beyond trying to be pretty. Wait — I was relaxed about potty training my kids, maybe? No, my husband and I were just too overwhelmed with having two kids under three years old that we essentially forgot to potty train, and they did it themselves. The truth is, we were drowning.

[3] In an interesting and amusing reversal, I’m told that in the world of jazz, white musicians sometimes do become anxious when attempting to live up to the high standards of black accomplishment. I’m reminded of a story in which two white jazz musicians were jamming. When one says to the other, “Hold on. You’re not doing that right,” the other responded peevishly, “And how the hell would you know?”