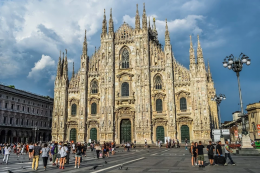 “The legionary spirit is that fire of one who will choose the hardest road, who will fight to the death even when all is already lost.” — Julius Evola

Despite the distractions of luxury shopping arcades like the Galleria Vittorio Emanuele II, or sipping Fu-Go at cafes like it’s 1930, I had come to Milan — clutching firmly on to a copy of Lucy Maulsby’s Fascism, Architecture, and the Claiming of Modern Milan, 1922-1943 (2014) — to study firsthand places like the House of Castani, a baroque palace where the Italian Fasci of Combat was founded in 1919; Maurizio Cattelan’s marble sculpture of a hand making a Roman salute; and to walk across the Duomo Square, looking up through the bright azure sky, to gaze upon Arturo Martini’s fascist reliefs.

For Mussolini’s regime, influenced by the highly cultured education minister, Giuseppe Bottai, was a major patron of the arts; a fact that was recently celebrated by an exhibition entitled: Art, Life, Politics: Italia 1918-1943 held at the Fondazione Prada, which included over six hundred works and over a thousand archival documents. It was a massive curatorial undertaking, which encompassed classically-oriented Novecento Group work and Adolfo Wildt’s neo-baroque sculptures standing cheek-by-jowl with Futuristic cityscapes by Fortunato Depero.

The exhibition is incontrovertible evidence of the number of Italian artists, of varying degrees of political commitment, that took part in the official biennials, triennials, and quadrennials during the fascist epoch. Culture played a significant role in the government’s concept of nation-building, culminating in the fully immersive Mostra della Rivoluzione Fascista of 1932, a celebration of the tenth anniversary of Mussolini’s March on Rome. Mostra transfixed 3.7 million visitors — one in ten Italians — and boldly hinted at the grand architectural designs intended for Mussolini’s never-completed E42 project in Rome. This Expo was planned to mark Fascism’s 20th year in power but was unfortunately derailed by the war.

So given the grandiose stage, it came as no surprise that Italian patriots had only weeks before taking to the streets, holding a banner that was emblazoned with “Honour to Benito Mussolini” and tearing down the garlands that were draped around the statue of an anti-fascist partisan. While in Rome, marchers — carrying the flag of the Italian Social Republic — chanted “No more anti-fascism!” The editors at La Repubblica and the Gazzetta dello Sport nearly went into full cardiac arrest; their journalists rushed to publish quotes by people like Roberto Cenati — head of the Milan branch of the National Association of Italian Partisans — who said: “We are facing an escalation of neo-fascist provocations.” [1]

In response to the flash-mob of masked Lazio Irriducibli Ultras invading the Piazzale Loreto — the very place where Il Duce and his mistress Clara Petacci were unceremoniously strung up by their ankles to an unfinished Standard Oil gas station and Fascist Party secretary, Achille Starace, gave a stiff-arm salute to “my Duce!” before being shot in the back of the head — Cenati continued: “What is new is how easy it has been for some football hooligans to exhibit a banner celebrating Mussolini.” His group, he was at pains to explain, had tried in vain to shut-down neo-fascist organizations for some time but admitted “there is no political will to do it. Political will was missing in the past, and it’s missing now.” [1]

This is partly true. Mussolini’s great-grandson is active in the European Parliamentary elections, and despite Italian law forbidding the reorganization of the Fascist Party, several groupings such as Giorgio Almirante’s Italian Social Movement, Gianfranco Fini’s National Alliance, Tricolour Flame, Forza Nuova, the National Socialist Front, Roberto Fiore’s Terza Posizione; and the youthful Casa Pound have been openly sympathetic to that particular ideological milieu. Silvio Berlusconi’s Forza Italia, Matteo Salvini’s Lega, and especially Giorgia Meloni’s Brotherhood of Italy could be described as fellow travelers of the right.

Italy was fertile soil for Junio Valerio Borghese — leader of the pro-German X-Mas unit during the war — and Stefano Delle Chiaie’s National Vanguard militants to attempt a coup in December 1970. Italy was also perfect for the political soldiers of the Armed Revolutionary Nuclei (Nuclei Armati Rivoluzionari) like Valerio Fioravanti, Dario Pedretti, Francesca Mambro and Allessandro Alibrandi to take the armed struggle onto the streets between 1977 and 1981 during the infamous Years of Lead. Fioravanti famously said: “About defeat we never cared, we are a generation of losers, always on the side of the defeated.”

The same sort of nihilistic bravado informs the ethos of the Ultras of Verona, Lazio, and Inter today. They emerged on the football terraces during the late 1960s and early 1970s but had become fully-fledged Blood and Honor-style fighting machines by the early 1990s. They’re warrior spirits who speak with reverence of the Arditi and the Brigate Nere, for whom the words “tolerance” and “multiculturalism” mean nothing and fulfill, almost in an unconscious way, Nietzsche’s maxim Roma contra Judea.

These terrace troops revere myths like The Capitoline She-Wolf and march under the Giallo e Rosso colors of classical Rome — the mixture representing oil and wine, blood and gold, and the sun and the heart. They’re men who respect the Romanita traditions that Mussolini and his cohorts like Gentile upheld, a fact that assists the right in holding sway in places like Lazio’s Curva Nord and Roma’s Curva Sud. (We see symptoms of this when black players are booed at the San Siro stadium in Milan.)

The rise of the Ultras to prominence is an understandable response to news that Prime Minister Giuseppe Conte has granted permission for two migrant NGOs to land refugees at Italian ports, intends to reintroduce benefits and protections for asylum seekers that were previously scrapped by Matteo Salvini, and will reinstate residency permits for illegals.

Conte’s actions will inevitably further inflame a precarious situation, especially after a group of Nigerians dismembered the body of eighteen-year-old Pamela Mastropietro in Macerata, three migrants raped and murdered sixteen-year-old Desiree Mariottini in the San Lorenzo area of Rome, and a recently arrived Ghanaian man is convicted of desecrating the Basilicas of Santa Prassede, San Giovanni de Fiorentini and San Vitale.

Il Duce is turning in his grave in Predappio.

No doubt, Italian patriots will exact justice in the spirit of Gabrielle D’ Annunzio:

Everything was dared
And everything attempted.
Ah, why is human power
Not as infinite as desire?