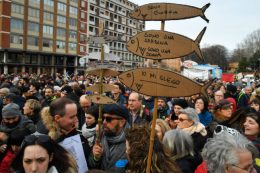 My heart sank when I saw the flash mob, nicknamed the Sardines, crowding the 15th-century Piazza Maggiore in Bologna to oppose Matteo Salvini’s Lega campaign launch in the PalaDozza, waving their banners and chanting their slogan: “Bologna non si Lega!” The allegedly grassroots political movement decided to take a stand against the League and its charismatic leader in the Emilia-Romagna district, an area that has long been a fervent Communist stronghold since the time of the Second World War.

But this was much more uniformly organized and far better orchestrated. It’s as if the people behind it had mastered the art of choreographing a spontaneous outburst of indignation through the experience they had already gained during the various Colored Revolutions the world has witnessed over the last few decades.

Indeed, in Rome, the Sardines’ thin-faced and floppy-haired de facto leader, Mattia Santori, lived up to his probable paymaster’s expectations by demanding that Giuseppe Conte’s government condemn hate speech, withdraw laws that placed barriers in the way of migrants coming to Europe, and welcomed the return of the Open Seas initiative facilitating relatively easy transit between North Africa and Italian ports for so-called refugees, which was temporarily stopped by Salvini’s government.

It’s the very same multicultural agenda that George Soros so generously sponsors through his Open Society Foundations and their adjuncts like the Central European University. The faculty there would no doubt choose to suspend the capability of sovereign countries to deport dangerous immigrants, and prefer instead for the EU in Brussels to create new protections for those very same people — principles that underpinned very similar protests in Paris, Brussels, and Berlin.

The “Welcome Back to the Sea” rally held in the huge Piazza VIII Agosto in Bologna hosted bands like Manuel Agnelli’s Milanese group Afterhours, Turin based Subsonica, the rapper Marracash, left-leaning folksters Modena City Ramblers, and the patchanka stylists Casa di Vento. It reminds one of the Rock Against Racism gigs held all over the UK during the late 1970s by the Trotskyite Socialist Worker’s Party that gave top billing to popular punk groups like The Clash in order to win over the young and impressionable and demonize the British National Front.

The numbers are alarming: 600,000 migrants have entered Italy in the last four years [1], and an official police report indicates that between 60% to 70% of all violent crime in the country and 85% of all property theft is committed by migrants. [2] Not to mention the escalating rate of rapes — like those recently committed by a Bangladeshi on a Finnish au pair in Rome, or the four Africans gang-raping a Polish tourist in Rimini.

None of this seems to faze Massimiliano Panarari, a politics professor at Rome’s Luis University, who argues that the main importance of the Sardines “is to mobilize people and build the fight against Salvini.” [3]

These upcoming elections will be something akin to a second Crossing of the Rubicon for the Italian electorate: A stark and apocryphal dilemma. Literally, a black or white choice between Sardines and Centurions.

The former, closely linked to Nicola Zingaretti, secretary of the center-left Democratic Party and warmly endorsed by former Prime Minister Romano Prodi who said: “They are formidable and should not be colonized or exploited by any party.” The latter is predicted to form a coalition with other right-wing parties, like Berlusconi’s faltering Forza Italia and the aforementioned Brothers of Italy — a prospect that sends the anti-fascist and anti-racist Sardines into a frenzy:

Something big is happening,” said Alessandra Giordano, a 24-year-old student braving the downpour in Milan, Salvini’s hometown to support the Sardines, “It’s time to let them know we’ve woken up against racism, hatred, people fighting each other. Populism divides us – for example, trying to make us fear people coming from war and other countries. We don’t want this. [4]

Panarari believes this ethos could be used to transform the Sardines into an organized structure to mobilize voters, which in turn would result in “prominent Sardine members being invited to join the existing left-wing parties.” [3] This should hardly surprise anyone given that the entire raison-d’etre of the movement is to present a street-based army to intimidate and harass populists while allowing the media to extol the virtues of these democratic defenders — all while trading in the usual rhetoric about the dangers of a 21st century Blackshirt March on Rome.

This concept, I suspect, may well be on the mind of Giorgia Meloni, a slang-talking firebrand from the working-class suburb of Garbatella in Rome. She’s been favorably compared to her French counterparts, Marine and Marion-Marechal Le Pen. She’s a forthright graduate of the Italian Social Movement’s Youth Wing, who in an interview was quoted as saying “I have a serene relationship with fascism.” [5] Her party regularly presses for streets and palazzos to be named after Giorgio Almirante, the founder of the post-Mussolini Italian Social Movement. Meloni is a personage who according to Professor Luigi Di Gregorio, based in the faculty of political science at Tucsia University, leads a movement that appreciates Salvini’s work but believe he is too “simplistic, over-exposed in the media, and not very sophisticated.” [6] In essence, a party whose cadres are far more ideologically orientated to thinkers like Julius Evola and historical heroes like Garibaldi and Mazzini who strove to unify their nation rather than someone like Salvini, who first came into politics through the pro-separatist Northern League.

If only for that reason alone, any influence Meloni and her The Brothers of Italy can have on the irrepressible Salvini will be inordinately valuable. The danger of “selfie politics,” like that of the cult of the personality, is that it dies with the leader — a fact that is not lost on the Italians. The opportunities offered by the rise of Salvini and national populism across Europe, in general, are too good to miss.

Steady hands on the ideological tiller of the various regional variations that are emerging across our homelands will ensure sustainable and long-term benefits, not only for the individual countries in question — such as Italy — but also for Western Civilization as a whole.