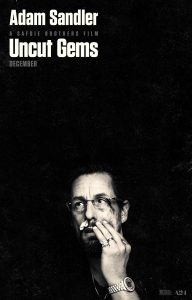 When I left the theater after watching the Safdie brother’s film Uncut Gems, I wanted to take a shower to get all the sleaze off of me. In many ways this is a revolting picture, yet still educational and somewhat red-pilling if approached from the proper mindset. Along with starring NBA basketball star Kevin Garnett as himself, the film’s biggest selling point is the appearance of comic actor Adam Sandler in his first gritty, dramatic role. From a technical standpoint, Uncut Gems offers believable performances in an unrelenting and well-edited story with a creepy synth soundtrack and enough cinema vérité in New York City’s Diamond District to make it a highly memorable experience. But not memorable in a good way.

Spoilers galore below, but only because this is the kind of film better known about than actually seen.

The story focuses on Howard Ratner (Sandler), an identifiable Jew who struggles to run a jewelry store while paying back around $100,000 in debt to his brother-in-law Arno. Played by a menacingly dead-eyed Eric Bogosian, Arno is a mobster and loan shark who spends most of the film chasing Howard down with his goons. But Howard has other troubles, such as putting up with his resentful wife Dinah (Idina Menzel), dealing with his shifty shiksa mistress (Julia Fox), trying to retrieve an expensive opal he stupidly loaned to Garnett, and keeping a lid on his gambling addiction, which is the real source of all his problems.

The point of the plot, essentially, is to watch Howard swirl down the drain as everything negative in his life seems to swish and slosh at him from all sides. What sets Uncut Gems apart from other underworld dramas—aside from its repulsive Jewishness—is that Howard has flashes of insight that reveal an independent mind, albeit one hampered by an addictive personality, poor impulse control, and a pathological penchant for degeneracy. Perhaps this is what the Safdie brothers Josh and Benny were counting on to make the audience sympathize their lead character. It’s not nearly enough.

Howard’s main stroke of genius is to infer the existence of a highly valuable black opal in Ethiopia based on his research on a tribe of African Jews in the region. He’s ecstatic seemingly to the point of orgasm when the opal arrives. This is not an overstatement. At least twice in the film a windfall causes Howard to moan as if experiencing a sexual climax—a disgusting character trait if there ever was one. Howard plans to sell the opal at an auction for $1.2 million, but reluctantly lends it to a superstitious Garnett who wants it for luck during one of his playoff games. Howard is a passionate and studious sports fan who is in thrall of Garnett when he and his posse show up at his store. In fact, Howard caters to low-class blacks and employs one of them to lure them into his store so he can fleece them with tacky jewelry.

The cacophonous scenes in the jewelry store are headache-inducing. Howard’s black customers continually shout over each other while haggling, gesturing, arguing, pushing, shoving, and dropping a B-52’s worth of F- and N-bombs every thirty seconds. I’m sure that these scenes are quite accurate, but they are also the reason why many white people dislike both blacks and Jews. Blacks behave in beastly, petty, and stupid ways, and Jews cater to them for money.

The plot takes a sharp turn when Howard pawns Garnett’s championship ring (which he had left for collateral) in order to bet on Garnett’s playoff game. So this is Howard: making bets with money that isn’t his while constantly staying one step ahead of his Mafioso creditors—who, by the way, are showing remarkable patience with Howard given how far into the red he is with them.

There’s absolutely nothing redeeming about Howard Ratner. His wife knows it. She’s tasteless and vain but still can barely look at him. His kids know it. One is insolent and dismissive to him to his face, and the others seem to aspire to his level of hedonism. His mistress may not know it. Then again, she’s the kind of girl who lets a black entertainer named The Weeknd snort coke off her tits in a public restroom and later tattoos Howard’s name on her ass.

Is there a single honest, upstanding person in this movie?

Not Howard’s father-in-law Gooey. After an Orthodox Jewish ceremony, Howard convinces Gooey (played by Judd Hirsch) to shill for him at the auction in order to jack up the price of his opal. Perhaps the only honest fellow here is an unnamed Jew who pesters Howard from time to time for his money back on a bad Rolex he had sold him. But this guy is a schlemiel, and Howard blows him off without trouble.

The story reveals its black, twisted soul towards the end when Howard invites Garnett into his office and finally manages to sell him the opal. Garnett shells out $175,000 for it since it had been downgraded at the auction. Immediately after, he presses Howard for how much he had paid to acquire it from Africa. Howard plays coy for a while but eventually coughs up an answer. $100,000. (Probably a lie, knowing Howard.) This annoys Garnett who now sticks up for his fellow blacks in Africa. Howard paid them less than one-tenth of what he thought he could sell the opal for. How could Howard do such a thing to those poor suffering brothers? Howard responds by asking Garnett if he’d rather win a game by one point or thirty. He basically tells him that while the basketball court is Garnett’s territory, the jewelry business is his, and the point of it all is to win, to destroy your competition and to rake in as much as possible for yourself.

That evening, Howard gets what was coming to him: a bullet in the face from one of Arno’s goons. They had finally had enough. It didn’t matter that Howard, genius that was, had just placed perhaps the greatest sports bet of all time and stood to make millions. Money was not going to help him as he lay bleeding out on his shop floor.

Yeah, there’s a reason why greed is listed as one of the seven deadly sins.

Anyway, I’m struggling to find any redeeming quality in Uncut Gems other than making the job of anti-Semites a little bit easier. The film has no moral core and serves only to offend the sensibilities of its audience, if they even have those. As the door slams shut on Michael Corleone at the end of The Godfather, we mourn the loss of his soul. As Henry Hill picks up his egg noodles and ketchup at the end of Goodfellas, we laugh at the irony of his life. Uncut Gems, however, completely lacks the cinematic vision of a Coppola or Scorsese, and so we are left wondering why the film was made to begin with.

Sure, the film is based in reality. But there is a lot of reality we don’t need to spend thirty bucks and two-and-a-half hours of our life on, such as the video feed from Howard Ratner’s colonoscopy. I am certain that if Mel Gibson had directed this film, Jews would have been lining up in protest, screeching about anti-Semitism. I guess if something is to hit this close to home, you’d rather have one of your own doing the hitting. And Uncut Gems hits Jews very hard.

Most of us already know that some of the nastier stereotypes about Jews are based in truth. All that Sandler and the Safdie brothers accomplish in Uncut Gems is to remove any doubt about them.