Tom Petty & The Decline of Culture & The Music Industry 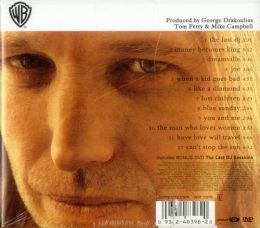 I don’t recall when I first heard “The Last DJ” (2002) by Tom Petty and the Heartbreakers, it was one of my dad’s favorite songs, I’m sure I heard it from him at some point. Like most great artwork, it was something that struck me immediately and continued to develop and grow as time went on and I had the capacity to understand it on higher levels.

The song itself is defiant, not in the same manner as 1989’s “I Won’t Back Down.” Defiant in a way that is less about personal conviction, and more about a man launching a salvo at an imposing edifice. That edifice, the music industry, the state of culture, and what society is willing to accept from those at the top of the culture industry.

The triumphant and rebellious chorus;

(chorus, middle-8 with a radio host in the background)

Opening Verse: Here, Tom Petty is describing himself ostensibly, but also everybody who is rebelling against the status quo and cultural hegemony. In an era that is increasingly materialistic, hyper-atomized, characterized by status-seeking in social media and job titles. There are people who are absolute “company men” in every sense of the word. They don’t own themselves at all, they are bought and paid for, they’ll do anything their boss asks, no matter how ridiculous or immoral. Why? Because they are in debt, leasing cars, putting on a show, they’ve sold themselves for fake status symbols and are effectively whores. A few trinkets and a nice job title to impress people at cocktail parties was all it took. The price for men’s souls has never been lower.

The next two lines are about the music industry and culture industry executives, “the boys upstairs just don’t understand anymore.” The people with corner offices in the glass-plated high-rise buildings, looking down from many stories above, have never been more disconnected and alien. “the top brass don’t like him talking so much,” of course. Rebels do nothing but throw monkey wrenches into the wicked gears of “progress.” Those speaking their minds are a grave danger to this hostile system. The boys upstairs likely never did understand from the start, but they have been getting worse.

“And he won’t play what they say to play / And he don’t wanna change what don’t need to change.” A musician not doing what the producers and record executives tell him to do. People with views that go against the grain of this culture that is primarily manufactured and foreign to us. Being unwilling to change in an era of constant dragon chasing and 12-hour news cycles is viewed as a serious weakness, if not an outright mental illness. Some of us prefer the gods of old.

Second Verse: Culturally lynched for your views, there are just some things you cannot say or do within the confines of modernity and “polite society,” and if you dare try to escape, your punishment will be harsh.

The celebration of mediocrity has never been more present than today. Awards are given for lies, peace prizes given to war criminals, brutalist and deconstruction architects are given awards from architectural committees filled with their relatives. We are surrounded by people being elevated to demi-god status for pushing a backward and degenerate culture.

“all the boys upstairs wanna see how much you’ll pay for what you used to get for free.” Likely the most important line in the entire song and perhaps most prescient. Everything is commoditized. The prices have never been higher and the value has never been lower. It’s a game to them, to see what you’ll pay for these simulacra they sell. Not authentic experiences anymore, merely the illusion of one.

Final Verse: The last DJ took off. He’s opting out. He is no longer going to play this rigged game. He will still carry on, weary as he may be because the torch must remain lit through the long nights. He’s down in Mexico somewhere running a pirate radio station, and we’ll all tune in and remember how things were. We’ll think of how things could have been, and look forward to what can be once more.

Chorus: The Last DJ, a man riding the tiger, a man against time, a man walking through the ruins of civilization. All the same energy. Evolian, Nietzschean, and as an avatar. The last DJ must remain, he is the last chance at freedom, the last human voice. For those who proclaim to speak on our behalf, the “top brass,” “the boys upstairs,” those who celebrate mediocrity, they are nothing like us. They are something “other” something entirely foreign. The last DJ is living a refugee in the realm that should have been his. Yet he will return.

The criticism of the culture industry, materialism, and conspicuous consumerism are wrapped in the sound of rock n’ roll romanticism. It’s heartfelt, at times somber, and we are left wondering if the last DJ is going to make it not. Maybe he’ll be drowned out in the end, maybe that flickering torch he still bears will burn down the entire rotten establishment.

Tom Petty is not a stranger to conflict with record executives, much the opposite, he’s quite the veteran. At one point, Petty’s label was purchased by MCA, a far larger company, Petty objected, noting he felt like he was being “bought and sold like a piece of meat.” The contract terms were not favorable to Petty, so he breached, went in debt to finance his next record, then filed for bankruptcy, and refused to release the album Damn the Torpedoes that would give us “Refugee.” A high-risk high-reward strategy turning on the bankruptcy court allowing Petty to get out of his contract. It worked. MCA then signed Petty and the Heartbreakers with a far more favorable record deal.

Within two-years Petty was in another large dispute with MCA, the company wanted to release his album Hard Promises with a price of $1.00 higher than standard albums, up from the typical price of about $9.00 in 1981. Petty saw this as needless greed, even going to the press with his grievance to pressure MCA into bending the knee. Petty stood his ground and did not back down. MCA blinked. Petty won again. Beyond no stranger to conflict, Petty ascended to the status of warrior-poet.

In 1987, an arsonist drenched the back deck of his home in lighter fluid and set it ablaze. His home destroyed, nearly everything was lost. It was an event Petty would say bothered him for many years to come. Petty wrote the 1989 classic, “I Won’t Back Down” in response to those who tried to destroy his life and perhaps kill him and his  family who were home at the time.

There was no suspect for the fire, nobody was ever charged, but there was an odd rumor of disputes happening between Petty and members of the music-elite at the time. This is all, of course, mere rumor. Believe what you wanna believe.

I Won’t Back Down;

Hey baby, there ain’t no easy way out
I won’t back down

Indeed, there’s no easy way out, so for now, we’ll keep running down the dream.

**” Damn The Torpedoes” referrers to the American Civil War naval battle of Mobile Bay where the order was given to move the ship onward, to which a crewman replied there are naval mines in the way, and the captain replied: “damn the torpedoes, full speed ahead!” The accuracy and even reality of this event are questioned by historians, but the saying remains all the same. The relevance to Petty is that despite his legal and financial troubles at the time, he would forge ahead knowing the waters were dangerous and full of peril.

Warner Brothers was founded in 1923 by Harry, Albert, Sam, and Jack Warner.

« The Unbearable Smallness of Modernity