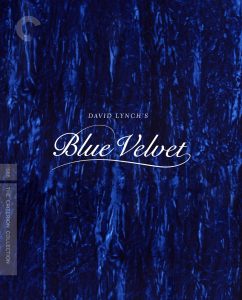 The Criterion Collection’s new Blu-ray of Blue Velvet contains 53 minutes of lost footage. Does this footage in any way alter my reading of the film’s psychological and political meaning? The short answer is no, but read on.

Blue Velvet was released as a two-hour film, but originally it was about two hours and fifty minutes long. The material Lynch removed is not raw footage that was never part of the film. Instead, it was edited into the film, scored by Angelo Badalamenti, and then removed by Lynch. For years, this footage was lost, but we knew the basic content from the shooting script and still photos of the scenes. But, to quote Lynch, through some “amazing grace,” what once was lost has now been found, and thanks to the Criterion Collection, now we can all see it.

Lynch does not present the lost footage in the order in which it appeared in the film, but my commentary on it will mostly follow the story.

In the theatrical release of Blue Velvet, we first glimpse Jeffrey Beaumont walking across a field to a hospital to visit his father. In the lost footage, our first view of him is at college, in the basement of a dorm, hidden in the dark, watching a couple kissing on a mattress. As the woman’s demands to “stop” become more strident, Jeffrey shouts, “Hey, leave her alone!”—the very words he later says to Frank Booth when he is pinching Dorothy Vallens’ breasts.

This opening strongly establishes two themes that are prominent throughout Blue Velvet: Jeffrey’s peeping Tom behavior and the connection between sex and violence. This scene also foreshadows the questions the movie raises about the blurry lines between rape and role-playing, victim and perpetrator, for the couple do not react as if Jeffrey has just stopped a crime. In fact, the woman looks at her partner with an expression that seems to say, “Are you gonna take that? Are you gonna let this guy to stop you?”

Jeffrey receives a phone call from his mother, telling him that his father has been stricken with a mysterious ailment and is in the hospital. She tells Jeffrey that he will have to withdraw from college and come home for good because of the expense of his father’s illness and the need for him to help run the family hardware store. This scene is vintage Lynch, with excellent music by Badalamenti and quirky touches like the mother’s bedside table cluttered with prescription bottles and the dirty, cracked mint-green walls the camera lingers on.

It also reveals a dimension of the mother’s character entirely absent from the finished film. She is sinister and manipulative, giving the strong vibe that she is less concerned with having Jeffrey take on adult responsibilities than with reeling him back into the nest before he can fully escape.

The other scenes with Jeffrey at college—including a surreal sock hop and Jeffrey’s farewells with his friends and his insincere, airheaded girlfriend Louise—are completely dispensable. Like practically everything that Lynch cut, they feel like TV.

Nighttime. A small airplane lands. Jeffrey’s mother picks him up at the airport. At first we wonder why Jeffrey is riding in the back seat like a child. Then we see that his aunt Barbara is in the front passenger seat. We see the car pull into the driveway, the family enter the living room, Jeffrey ascend the stairs. He surveys his childhood room. Returning feels like defeat. Then he goes to the blinds and peeks into the night, more peeping Tom behavior foreshadowing him spying on Dorothy Vallens through the slats of her closet door. The whole sequence really adds nothing. It is TV-like padding for people who can’t imagine characters traveling from point A to B without actually seeing it.

The following morning at breakfast, Jeffrey’s mother asks him not to mention to his father than he has withdrawn from college, adding to her manipulative quality. Then, finally, we arrive at the point where Jeffrey first appears in the final release, on his way to the hospital to see his father.

There are several more scenes with Jeffrey’s mother and aunt Barbara: the women singing “Clementine” as they wash the dishes, the mother receiving a shot from a Dr. Gunn for some unknown ailment, the mother waiting up for Jeffrey in the dark and startling him when he comes. (He has just seen Frank Booth for the first time and doesn’t need any more surprises.) And finally, an amusing sequence where aunt Barbara hunts for termites and leaves her quarry with a note to Jeffrey on a table next to an overflowing ashtray.

There are a couple of entirely dispensable scenes at the house of Detective Williams. In the first, Jeffrey has coffee and cake with Mrs. Williams while waiting for her husband to return. In the final version, we cut directly to the conversation with Detective Williams, although without establishing that he has just come home, it seems odd for him to be wearing his shoulder holster in his house.

The other sequence involves a dinner with Jeffrey, the Williams couple, their daughter Sandy, and Sandy’s boyfriend Mike, which establishes nothing except that Mike is jealous of Jeffrey, and that Mike is a vitamin-popping prude whereas Jeffrey (like Lynch) loves sweets and coffee. There is also a brief scene where Jeffrey and Detective Williams look at crime scene photos and Jeffrey focuses in on a swatch of (dunn-dunn-dunn) blue velvet. It all feels like TV and is well lost.

The sequence in which Jeffrey and Sandy go to the Slow Club to see Dorothy Vallens sing is much longer. Their car’s approach is dragged out, but the music is gorgeous. The club itself is quite droll, with its Maitre D’ and uniformed waiters clashing with the background twitter of electronic games. The opening acts are pure Lynch. First, we see a dog eating from a green bowl, a neon rabbit above his head, and a winds arrangement of the “Battle Hymn of the Republic” being looped in the background. Then we are treated to an excruciating comic, accompanied by “Beautiful Dreamer” and an exotic dancer. Both acts go on much, much too long.

There are three additional scenes with Frank Booth. In the first, Jeffrey tails Frank to a field on a windy night, watching him moving frantically through the dark to Dorothy Vallens’ apartment, then emerging sometime later. Frank is shot at such a distance that it is hard to see who he is, much less understand what he is doing.

In another scene, Jeffrey calls Dorothy’s apartment, and Frank answers. There are a few seconds of seething tension followed by Frank’s terrifying, “Speak, fucker!”

The longest sequence takes place after Frank and his gang arrive at This Is It. In the theatrical version, they simply enter Ben’s apartment. Originally, the sequence was much more complex. A grotesque old black man sings about a dog chasing a rabbit, accompanied on guitar by a white man, while a vacant, topless whore stares off-screen. It goes on much, much too long. This is apparently the back room of a bar/whorehouse. Frank and his crew burst in the front, then head straight to the back, where Frank threatens the life of one of the male customers.

None of these scenes add anything to the story, but the brief phone call is genuinely terrifying.

There are two scenes involving Dorothy Vallens. One is an alternative take of Jeffrey’s second visit to her apartment. In this version, the yellow man (Detective Gordon) shows up briefly to hassle Dorothy while Jeffrey hides in the closet and eavesdrops. But from his point of view, we can barely make out the dialogue. It adds nothing.

In the second scene, Dorothy and Jeffrey go to the roof of her building. Dorothy tries to throw herself over the parapet, but Jeffrey drags her back. Then they make love on the rooftop. The whole scene is murky, both visually and psychologically. The only loss is Angelo Badalamenti’s truly wonderful music.

There are a few other bits that I will not discuss: just hellos, goodbyes, phone calls, and other filler, none of it a loss.

Every fan of Lynch and Blue Velvet will love this footage. But Blue Velvet is a better movie without it. Some of the lost scenes underscore themes found in the final cut, particularly Jeffrey’s scopophilia, the association of sex and violence, and the association of bugs and evil. We also get a bit more of eccentric aunt Barbara and Jeffrey’s playful relationship with her. But really the only surprise is Jeffrey’s mother’s sinister side. Cinematically, the only distinctively Lynchian scenes are Jeffrey’s phone conversations with his mother and Frank, the events at the Slow Club and This Is It, and aunt Barbara’s bug hunt.

Will there ever be a “director’s cut” of Blue Velvet? Lynch had complete creative control over Blue Velvet, so the theatrical version is the director’s cut. It is nice to have the lost footage, but it should not be part of the film.

What does the lost footage reveal about Lynch as an artist? Some of the lost scenes are fluff and filler. Some are self-indulgent and boring. Some are interesting and well done. But none of them were essential to the story. This is why their removal does not fundamentally alter Blue Velvet’s meaning, but instead brings it into greater focus.