The Counter-Currents 2019 Fundraiser
The Political Center of Gravity 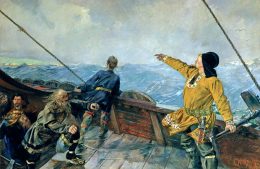 Our goal this year is to raise $100,000 in order to expand our efforts to build a metapolitical vanguard for White Nationalism. So far, we have received 242 donations totaling $21,842.92. We set our goals high because the task we have before us is formidable, but with your help, we will succeed. Two days ago, we were cut off from our credit card processor for the second time in less than three months. We immediately set up a temporary solution, which means that for a limited period, we can only receive payments and donations from American credit cards, but we will soon be back to normal. Our enemies desperately want to shut us down, but we will not be pushed around. Whenever they try to knock us down, it is our duty to get back up more determined than ever. This is a struggle for the destiny of our entire civilization, and we never expected things to be easy. If you want to support our fight, now is the time to do so.

When I learn of one more example of the political suppression of white interests and the expansion of liberal totalitarianism, such as Counter-Currents‘ recent deplatforming by yet another payment processor, my first concern is not with these efforts at silencing us in themselves, or the malice of our enemies. After all, our enemies are involved in genocide against us; they actively work to stamp out all adaptive behavior among white people, so their malice is hardly surprising. No; first and foremost, my concern is always with our reaction to those attacks.

So much of the secret to success in politics – and success in life – lies in your self-image. What kind of person are you in your own head? Often, the elements of that self-image aren’t explicit in your conscious mind. Rather, they appear indirectly in the way we behave, the way we expect to be treated by others, what achievements we expect from ourselves, and how we handle setbacks.

When you get involved in political debates or activism, do you believe that you will win, and do you act accordingly? Or do you assume that white people will continue to be humiliated forever, and that yours is just a symbolic protest, an attempt to preserve some of your own dignity? Do you engage in ridiculous conspiracy theories and other kinds of public self-indulgence because you believe – perhaps on a subconscious level – that we will never be able to reach the public with a serious message, anyway? When someone – perhaps a colleague or a family member – challenges you and questions your beliefs, do you back down in order to avoid conflict, or do you stand up for yourself and demand respect?

As a political movement, do we need the approval of our surrounding society, because we are filled with self-doubt and insecurity, or will society eventually start seeking our approval? When we are faced with adversity and setbacks, do we see that as an excuse to give up (because that is what we have been waiting for all along, in all honesty), or do we see it as yet another stepping stone on the long march to victory?

The key to understanding our relative lack of tangible results so far lies in a spiritual crisis within ourselves. So many of our people have lost faith in a future for our race. They expect failure, and that is reflected in how they relate to the political fight. They expect to be treated as second-class citizens, and they have given up on trying to change that. In short, they have lost the Will to Politics.

When I suggested in a speech of mine that we must set up the white equivalent of an ADL or an SPLC if we are serious about winning – essentially, a well-financed legal team and pressure group that fights for our interests and is ready to protect us when our rights are violated – the most common reaction from well-meaning people was that “it can’t be done.” Consider that for just one moment. Only fifty years ago, we were able to put people on the Moon. A hundred years ago, European explorers were going on adventures across the globe, working hard, showing endurance and courage in the face of austerity and adversity, and risking their lives, often with very little hope of material gain – but unwilling to refuse the challenge. A thousand years ago, Leif Erikson and his crew traveled in open boats across the stormy ocean to arrive in America, a continent they hadn’t even known existed. Now, some of us apparently don’t believe that we have the ability to set up legal teams in our own countries to prevent our children from being exterminated. In fact, we haven’t even made a real attempt!

In the end, our victory does not depend on anything external to ourselves. It boils down to who holds the center of gravity. When we are confronted with an opposing worldview, will we start moving toward it, or will that worldview start gravitating toward us? The answer depends on the weight and “groundedness” of our conviction, which is a spiritual aspect. On the most fundamental level, that is what all politics revolves around. Our groundedness will determine our self-image, which in turn will permeate our actions and how we relate to everything around us.

When Counter-Currents was founded nine years ago, I could immediately sense that it had a heavy center of gravity. It radiated a belief in the importance and truth of ideas, and did serious intellectual work. Whereas “intellectualism” can sometimes be a deep pit of escapism in which the “intellectual” disengages from the world and flees into the safe space of his own head, Counter-Currents has always remained true to its task of championing our cause in the battle of ideas. If we are serious about the cause of White Nationalism, and if we want to be taken seriously as a (meta)political movement, we must state our goals clearly and then start working toward them with purpose and conviction.

Our enemies have long since realized that they don’t stand a chance in a fair fight against us. In any open debate, we would humiliate them completely. We have all the truth, logic, and moral righteousness on our side – and that is why they are afraid. That is why they try to silence us and attempt to break our spirits.

Setbacks such as deplatforming, “book burnings,” and attempts at demonetization are only to be expected, because our enemies are serious about silencing us. And since these hurdles are expected, we will face them with a peaceful mind and walk right over them, every time they appear. Now it is our turn to show them that we are serious and that our spirit can’t be broken. The only way to victory is to push through every obstacle until we reach our goal.