How Six Feet Under Helped Bring Down the Religious Right 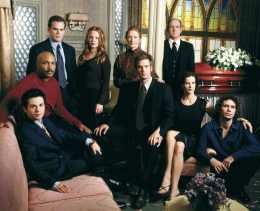 It is well known that death is as much a part of life as taxes, and yet there are very few creative works that deal with the mechanics of death. Who digs the grave? Who cuts and engraves the headstone? What happens behind the scenes at a funeral parlor? What is it like to grow up in a house where the remains of the recently departed are embalmed in the basement? How does one deal with the bereaved, day in and day out? The answers to this were shown in the HBO series Six Feet Under. But Six Feet Under wasn’t just about the business of burying the dead; there were many other serious issues discussed as well.

If the show can be summed up in one word, it is sophisticated. This is probably the first cable TV show that really moved what was essentially a soap opera or family drama into the realm of something really interesting, insightful, and beyond anything the networks could produce. Six Feet Under is not a middle-of-the-road, Lawrence Welk Show type of thing; it’s pretty edgy. And there is much to appreciate in this masterpiece of metapolitical cultural production.

The series ran from 2001 until 2005, and the show was set in that period – specifically, during the George W. Bush administration. The American government was led – officially at least – by a Texan born-again Christian conservative. At the time, the Religious Right appeared to have won a great victory. The Bush administration introduced the Defense of Marriage Act in 2006 outlawing homosexual marriage, and all sorts of Christian conservative proposals were talked up (if not much else) by the Republicans. Bush had won by running on the issues that the Religious Right had been promoting since the 1970s. By contrast, Six Feet Under’s characters were the exact opposite. How they differed from the Religious Right will be examined below.

Six Feet Under follows funeral director Nate Fisher, Sr. (Richard Jenkins), his wife Ruth (Frances Conroy), their three children, the children’s in-laws, and their business partner, Rico Diaz (Freddy Rodriguez) and his family. The series begins with the death of Nate Fisher, Sr. in an automobile accident, which launches the series’ overall story arc and sets up the pattern for every following episode save the finale, all of which begin with a death. The deceased’s circumstances and their funeral then drives the episode in some way, often including conversations between the dead and the living. For example, closeted homosexual David Fisher (Michael C. Hall) has a conversation with a deceased Mexican gang-banger over the meaning of honor and courage as he grapples with his sexuality issues.

Much of the show comes from the experiences of the producer, Alan Ball. He was the youngest child in his family, the most creative and artistic, who was for a time a closeted gay man, a “Peter Pan” who didn’t grow up for a long time. His family was devastated by his sister’s accidental death, and again by his father’s death.

Six Feet Under is an ensemble show, but four central characters emerge as the most important ones – specifically, the couples. The first is David and his gay lover Keith Charles (Matthew St. Patrick). As the series develops, this couple handles their dilemmas with increasing wisdom, maturity, and excellence. David successfully develops his funeral home business and deftly handles his PTSD issues after a terrifying carjacking. Keith handles his sister’s addiction issues and family problems. The pair also foster two black ghetto children.

The second is Nate Fisher Jr. (Peter Krouse) and Brenda Chenowith (Rachel Griffiths). Both are narcissists who have enormous gifts in terms of intelligence and wealth, but go through life making poor, woe-is-me decisions. Brenda has affairs, does drugs, and meets up with bad people. Eventually, Nate and Brenda go their separate ways. Nate then impregnates Lisa Kimmel (Lili Taylor), who was a former lover of his in Seattle. Lisa and Nate marry, but Lisa turns out to be shrewish, manipulative, and a kill-joy. When she dies – very likely at the hands of her former lover and brother-in-law – Nate should have felt happy at being honorably unfettered from a loveless marriage. However, he instead descends into self-pity and self-harm.

Brenda’s development as the series continues is really interesting to watch. After she and Joe (Justin Theroux) decide to have children together, she cheats on him. Joe’s angry outburst after he discovers the infidelity causes Brenda to change her ways. She gets back with Nate, and soon they marry and a child is on the way. While Brenda has stopped being a narcissist, Nate never does, and the series’ last episodes are emotionally intense due to his self-absorption. Nate dies unexpectedly after he is terribly cruel to Brenda. His messy death allows viewers to reflect on their own personal lives and family drama. The final episode is a surreal sequence where all the deaths of the primary characters are shown. It is a poignant reminder of one’s own mortality.

Six Feet Under is in fact sophisticated metapolitics, and it helped kill off the Religious Right that was a tremendous political force within the Republican Party from 1970 until 2006. Its power during that time was enormous, and cannot be understated. The Religious Right moved policy and set trends. Starting in the 1970s, Evangelical Protestants built parallel music, film, and publishing industries which specialized in spreading Religious Right themes. Some of them, such as James Dobson and his organization Focus on the Family, were something like Republican kingmakers. His group supported Ronald Reagan, for example, and backed George W. Bush more than anyone else.

At the time Six Feet Under was aired, the Religious Right was successfully holding off the social advances of those who were advocating for giving homosexual marriage legal status. Regarding this, James Dobson said in 2004:

Well, I think the polls show . . . values that matter most, and one of them is marriage. I have no doubt whatsoever about the fact that the issue of marriage, of the effort to impose same-sex marriage on this country and on the family, especially by the courts, who are unelected and unaccountable and who are arrogant and determined to impose their views on us, that stuck in the hearts of the people, and when they got an opportunity, they expressed themselves at the polls.

Dobson wasn’t lying; at the time, homosexual marriage was a losing issue, so much so that no candidate supported it during the 2008 presidential campaign. Nevertheless, it is often the case that when an institution is at its peak, the sands upon which it is standing begin shifting, or else a new and even more powerful force emerges – or sometimes both factors will work in tandem to bring that institution down. In the case of the Religious Right, Six Feet Under reflected a powerful force that was poised to overtake the born-again social conservatives.

Before proceeding further, one must state up front that the disaster that was the Dubya administration discredited the Religious Right more than anything else, given that they went for Bush in both the 2000 and 2004 elections and got stuck with much of the blame for the results of his many bad decisions. Nothing can change social attitudes more than difficult wars and an appalling economic collapse. But another thing that brought them down were the pro-gay ideas which began to be seeded in all manner of creative works that were appearing at the time, many of which were a great deal better and had a wider appeal than anything the Religious Right was doing. The problem with the latter’s cultural message is that in any story, problems must be resolved only according to the answers provided by the Religious Right. An abortion, for example, must be depicted as nothing but a horror show, and the protagonist must have all of his or her problems resolved by religion and conservative morality. In the Religious Right’s world, Christ[1] is all you need.

In Six Feed Under, the characters all explore different philosophies, from the nihilism of philosophers like Jean-Paul Sartre to non-Evangelical Christian ideas, such as those of the Quakers, Unitarian-Universalists, and Episcopalians. Things like abortion are treated as something tragic, but possibly necessary. Additionally, there is a very real exploration of the emotions someone might experience towards Divine Providence after a tragic death. What happens if you “found Christ,” and it turns out that wasn’t all you needed?

Six Feet Under also portrays homosexual relationships as being superior to heterosexual ones. If it wasn’t for feminism and the divorce revolution that damaged so many families in the 1970s, such a portrayal would be impossible. All of the female characters in Six Feet Under have considerable negatives: Ruth Fischer has had an affair, Lisa is an unlikable woman who has an affair that kills her, and Brenda, although she is mostly redeemed in the end, is reckless, and betrays Nate and Joe. Likewise, Maggie Sibley (Tina Holmes) swoops in on Nate for an affair. Most of the other women shown are bitchy, controlling, bossy, or unpleasant. Given such portrayals, who would want to get in a relationship with a woman at all? Meanwhile, the worst thing that happens to David Fisher when he embarks on a reckless series of homosexual encounters is a case of gonorrhea.

The biggest problem with the Religious Right is that they do not fundamentally address the challenges of feminism. They don’t push for young women to get married. The Evangelical Protestant community generally encourages careerism for women just as much as corporate America does, and putting off marriage to get a degree, a job, or whatever is every bit a problem as anything else. The Religious Right presents few lessons to women to teach them to be considerate or kind. Their metapolitical answer to the Divorce Revolution was the 2008 movie Fireproof. In this film, a wife’s infidelity is unremarked upon, and her husband, played by born-again actor Kirk Cameron, is encouraged to make his marriage something like an endless courtship.

While Six Feet Under seriously looks at all sorts of religious and philosophical concepts, the Religious Right’s stupidest ideas are exposed to the laughter they deserve. During the their cultural zenith, an eschatological theory called “premillennial dispensationalism” was very much in vogue. It is the idea that Christ will return to Earth in order to usher in a thousand-year Golden Age before Judgment Day. Works which dealt with it include the 1973 film A Thief in the Night and the highly popular Left Behind series (published from 1995 to 2007, and adapted into films). President Bush believes in it; he even referenced premillennial dispensationalist concepts in the lead-up to the Iraq War. Six Feet Under probably killed that idea for at least a generation by depicting the humorous death of Dorothy Sheedy (Beth Grant). She misinterprets sex-dolls inflated with helium to be people caught up in the Rapture.

Birthrates and the Great Replacement

Surprisingly, Six Feet Under mentions the Great Replacement – i.e., the replacement of whites in white homelands and institutions by non-whites. Nate and Brenda have children, while David and Claire Fisher (Lauren Ambrose) do not. As for David and Keith, gay sex is, of course, ultimately sterile sex; nevertheless, their adopted children turn out well according to the contrived obituaries, but in real life I suspect that adopting troubled black teens is a disaster. The Fishers are replaced by racial outsiders, and Claire dies alone – surrounded by her art, but not her descendants.

[1] For a good fictional representation of this reality, I recommend reading Mark Butterworth’s I Like the White World (Createspace, 2013).

» Call for Transcripts
Counter-Currents Needs You!