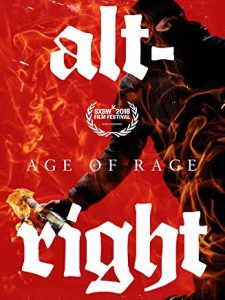 Based on a few clips, I was certain that Alt-Right: Age of Rage (2018) would lead to permanent physical damage from sheer cringiness. But I was delighted to have been proven wrong. This is a remarkably fair-minded documentary. On balance, though, I think it will be good for white identity politics. Age of Rage was directed by Adam Bhala Lough, an American of partial South Asian descent.

The film starts quite tendentiously, with footage of a German American Bund meeting in New York City in the 1930s. A line of young women walking into the meeting is accompanied by a stock sound effect of marching feet. The speaker, Fritz Kuhn, has a German accent that sounds comical and sinister. He speaks of taking America back from Jewish power. At one point, a certain Isadore Greenbaum rushes the stage and is tackled by Storm Troopers. New York’s finest then hustle in to break up the fight.

Then we read the words:

At this point, I knew that Lough would cut either to Hailgate or Unite the Right in Charlottesville. It was the latter.

From that point on, however, the tone became generally more balanced and the tide began to turn in the direction of the Alt Right. Basically, Lough made a practice of balancing pro-white speakers with anti-white speakers. The main pro-white voices are Richard Spencer of the National Policy Institute and Jared Taylor of American Renaissance. The main anti-white voices are Daryl Lamont Jenkins of One People’s Project and Mark Potok formerly of the Southern Poverty Law Center.

We also hear from Gavin McInnes of the Alt Lite, an Alt-Right video blogger known as TV KWA, Sikh activist Simran Jeet Singh, and Lacy MacAuley and John Carico of antifa. There are also brief clips of Milo Yiannopoulos and David Duke.

In Lough’s hands, all of his interviewees come off as articulate and sincere. Since it is child’s play to make even experienced speakers look exactly the opposite, we have the filmmaker’s integrity and honesty to thank for that.

There are some cringey moments.

For instance, we are treated to a debauched-looking Richard Spencer obviously posing with a cigarette and Gavin McInnes preening before a mirror, then loudly blowing his nose (clearly for show), before beginning his interview. But these were not candid moments included to be embarrassing. Both men were obviously posturing before the camera. No doubt they thought they were being “alpha” and “badass.” So the inclusion of these gaffes is on them, not Lough. (Also, in spite of his bizarre introduction, McInnes gives a compelling performance.)

And, of course, there is Hailgate.

But the cringiest moments came in the last 45 minutes of the film, where we are treated to extensive footage of the 2017 American Renaissance conference and Unite the Right in Charlottesville a couple weeks later.

The Amren footage decidedly favors the pro-white side. The antifa are mostly fat, unattractive, self-righteous, and shrill misfits, with really lame chants, whereas the conference-goers are well-dressed and well-behaved, with conspicuously more fit people. At 63 minutes there is a welcome cameo of the Counter-Currents table.

The Charlottesville footage has cringe on both sides.

The torchlight march to the statue of Thomas Jefferson the night before the rally was, in terms of optics and messaging, extremely impressive.

But on the day of the rally, there are numerous shots of goofy and gross-looking people—from both Unite the Right and antifa—wearing home-made uniforms, including armor, and carrying improvised weapons. When the two sides started fighting, it was sometimes hard to tell which side people were on. So the net effect on the normie viewer should be a wash.

There is also ample footage of the police doing nothing while the antifa attack Unite the Right. Reporters and bystanders repeatedly ask them why they are doing nothing. Then, after countless fights and injuries, we hear the state’s declaration of an unlawful assembly. Riot cops move in (again to a cue of marching feet), and in the ensuing chaos and violence, Unite the Right attendee James Fields crashes into a crowd (to a stock cue of a race car engine), killing Heather Heyer and injuring many more.

The worst moments on the pro-white side included Richard Spencer donning his bullet-proof vest, his security detail scrambling through a drill, and his big entrance saying “hail victory.” According to Jason Kessler, who is suing the city of Charlottesville over Unite the Right, Spencer had declined a police escort to the park so he and his guys could “look strong” in their entrance. If this is true, it undermines the narrative that the authorities are completely responsible for the obvious decision not to protect the rally from the antifa mob. We can only hope that a fuller picture of events emerges as Kessler’s suit continues.

As for the interview footage of Taylor and Spencer, I thought both men did admirable jobs. They made telling points with eloquence and sincerity. I was particularly impressed at the end, when both Spencer and Taylor answer the question of whether or not white demographic decline depresses them and makes them want to give up. Spencer offers an excellent rebuttal that I use as well: white demographic decline is precisely what is driving the rise of white identity politics. Taylor responds by arguing that he does not act based on calculations of outcomes but out of duty to his ancestors and his descendants. Still, he believes he can win.

The final question of the film is posed to Spencer and Jenkins: Is America now too divided to come together? Spencer’s response is excellent in both content and delivery. This gist of his answer is: maybe America can’t come back together. Maybe race and religion and ethnicity really do matter. Maybe this country has become too diverse to survive. I think a lot of sensible white people who are growing weary of increasing political polarization—driven mostly by Left-wing anti-Trump hysteria—will find Spencer’s remarks quite credible.

Jenkins’ response, moreover, is wholly unconvincing. He simply denies that America is divided. We are merely “frustrated” and in need of answers. It is patent nonsense in light of everything we have seen before it, but Jenkins is so adamant that unthinking people might actually find him convincing.

Although I disagree with them profoundly, I have to admit that Jenkins and MacAuley acquitted themselves well. Both have killer shill instincts, immediately trying to frame events in their favor even as they unfold before them. But both of them state their core views in a creditable way.

Jenkins is a black man with a large chocolate chip on his shoulder. He speaks ebonic English (“dat,” “dere,” “gone” as a verb) with great dignity and conviction but little by way of argument. Still, his judgment on Unite the Right while the rally was still winding down was prescient, namely, that this was the beginning of the end for the Alt Right.

MacAuley is a strong, independent womyn who has come a long way, baby, and will never be feminine, agreeable, barefoot, pregnant, or make sandwiches for anyone but her fellow protesters.

Potok is the slickest anti-white voice, but the most problematic, since everything he says is a cliché. These clichés are necessary, he says, because the old technique of Jewish organizations—namely to work with the media to quarantine pro-white ideas—no longer works because of the proliferation of alternative media. Thus people have to be inoculated from pro-white ideas with such talking points as the following.

Potok justifies the Taliban-style destruction of Confederate monuments, which he says are explicit expressions of white supremacism. As an example, he gives a monument in Colfax, Louisiana to three white men who died in a battle with black unionists. “That can come right down,” he says. Here he tips his hand.

If one really wanted to create a peaceful multiracial society, wouldn’t one seek a position beyond the racial conflicts of the past? Why not pursue reconciliation between both sides of the conflict? Why not, for instance, create a monument to the blacks who died, rather than remove a monument to the whites? Or better yet, why not let sleeping dogs lie, since most blacks and whites in Louisiana have long forgotten such historical events anyway?

But Potok does not want racial peace and reconciliation. He wants to refight the race wars of the past. And he sides with non-whites against whites. But this time, he wants the whites to lose.

Many people believe that the Southern Poverty Law Center and other such organizations wish to create a world of multiracial harmony. White Nationalists believe that diversity is just a euphemism for white dispossession. Diversity just means fewer white people. Today, it is our monuments that are being erased. Tomorrow it is our racial consciousness that will be erased. But if sub-replacement white fertility, miscegenation, and non-white immigration are not stopped, eventually our race itself will disappear.

A yellow post-it note by Potok’s desk is captured by Lough’s camera. On it, Potok keeps track of the decline of America’s white population decade by decade. But if diversity simply adds richness to America, why specifically keep tabs on white decline? I would love to hear Potok’s explanation for this. Perhaps, someday, he can be asked under oath.

Lough asks his interviewees about violence. McInnes wholeheartedly endorses it. Jared Taylor and Mark Potok reject it as counter-productive. Simran Singh says it is only justified in self-defense. Jenkins and MacAuley would cry out as they strike you. Spencer is not included.

Taylor, McInnes, and Yiannopoulos all defend freedom of speech. Potok, Singh, and Jenkins at least acknowledge that it is protected by the First Amendment to the US Constitution. But they prefer to emphasize the terrible consequences of respecting free speech for white people by trotting out Wade Michael Page and Dylann Roof. Again, Spencer is not included, which is just as well, because he doesn’t believe in free speech.

Age of Rage ends on an apocalyptic but rather sour note with Matt Christman, some sort of Marxist podcaster, ranting about how neoliberalism will create ecological and economic disasters that will displace millions of people. This will force a choice: to appropriate and redistribute the ill-gotten gains of the First World to guarantee the existence of all—or to embrace genocide. The Alt Right, he says, is paving the way for the latter solution.

This analysis comes out of nowhere, and frankly it seems nutty. Is it meant as an illustration of the views that guide Jenkins, Potok, etc.? Does it represent the filmmaker’s own views? The film seems too well-balanced for that to be the case.

Whatever the filmmaker’s motive—to say nothing of the foolishness of the Marxist analysis of fascism, or anything else, for that matter—the truth is that, politically speaking, the center will not hold. Instead, it will be increasingly abandoned for white and anti-white identity politics, then what remains will be pulverized when these two blocs clash for dominance.

Although it is certainly not the director’s intention, I think Alt-Right: Age of Rage will tip the outcome in our direction. Thus I highly recommend it, and I especially urge you to show it to select normies and share the results in the comments below.