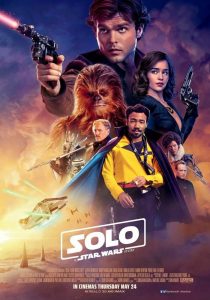 I had a bad feeling about this.

The real problem is making a movie about the young Han Solo in the first place. Because what makes Star Wars compelling is not space battles and cantinas full of exotic aliens. It is the presence of Grand Politics — the Empire and the Rebellion — and the Numinous: the Force and its initiates, both good and evil. Han Solo before his involvement in either is just the cynical smuggler we met on Tattooine.

Now, there was nothing to stop Disney from making a great movie about a cynical smuggler with a good heart trying to make his way in a savage universe. But such a movie would be unlike any other Star Wars movie, and that would present a problem for the writer and director. They could not dine out on Grand Politics and the Numinous. At best, these could only appear on the margins and in a manner in which Han could not grasp their full significance. Instead, they would have to do a straightforward adventure movie set in the Star Wars universe, but without depending upon the factors that make the franchise unique and compelling. (To say nothing of sure-fire hits, even when they are bad.)

But there are two kinds of adventure movies: pulp films in which cardboard characters dodge random explosions — and good films, which need to have three things: character development, dramatic conflict connected to deep moral and metaphysical themes, and a story that is not just one accident after another. A good plot needs an element of necessity. The story has to be in some way generated by the characters and the moral and metaphysical themes. Great, involving stories are encounters between what is deep in us and what is deep in the universe.

Solo could have been a good movie, even a great one. But the writers and directors needed to ask themselves at every step: Would this still be a good movie if we dropped all the Star Wars crap and set it in any other universe or time period? The answer, unfortunately, is no. I found Solo to be a lifeless, uninvolving movie from beginning to end.

Solo is not a calculated, cynical, derivative farce like The Force Awakens and The Last Jedi. Those films are evil and inept. Solo is neither. It has an original plot. It is well directed. It is competently acted. It is often great to look at. But it is basically just a pulp-level caper film, where the heroes rush from one contrived crisis to another, always saving the day in the nick of time.

At one point, it crossed my mind that maybe Disney had confused Han Solo with Indiana Jones. But the first three of those movies were pretty good, and even they had mystery and magic. (Of course everybody knows that Star Wars is based on old pulp space opera serials. But Lucas took them to a higher level.)

Basically, Solo makes a list of all the things that we know about the young Han Solo from the original trilogy. He presumably had a childhood. He has a name. He met Chewie. He won the Millennium Falcon in a card game with Lando Calrissian. He made something called the Kessel run in 12 parsecs. The movie then resolves to stitch all these together while including other obligatory Star Wars tropes: a cantina scene, a wisecracking droid, some space battles and chases. There’s nothing about the Jedi and the Force, and the Empire is only present on the edges, and in the most sordid and grimy way possible. (We do, however, discover why Storm Troopers can’t shoot, for the application procedure is hardly rigorous.)

But this is not how you create a great story. At best, these are just side dishes and trimmings. The main course should have been an original plot. The back story stuff should have been worked in as asides or surprises. One of the best things about Revenge of the Sith and Rogue One is how neatly and pleasurably they slotted into what we already knew happened from the first trilogy. But they weren’t just back stories. They had self-contained plots.

Furthermore, the underlying plot of Solo is stupid. Han and Qi’ra are in love. Han and Qi’ra are on the run from gangsters. Han escapes, but Qi’ra is captured. Han then spends the next three years in the Imperial Army, hoping for an opportunity to get a ship, return home, and find Qi’ra. But why does he need his own ship to return home? Couldn’t he book passage on another vessel? And why does he even need to return home to learn about her fate? Are we to believe that in a universe with faster-than-light travel, people don’t have email?

I can’t recommend Solo. It simply left me cold. It is not a bad movie, but it is not good either. It did not make me angry like The Force Awakens and The Last Jedi. It just made me bored. It is a waste of time and money. I never thought much of Han Solo to begin with. And I still don’t. The character has no magic or grandeur. He was never quite up to the Star Wars universe, and he is nothing without it. Ron Howard is a talented director, but there may have been nothing he could do. Solo‘s fate may have been sealed before he stepped in.

Solo has plenty to irritate racially conscious whites. Alden Ehrenreich is twice as Jewish as Harrison Ford. Woody Harrelson’s character has a black squeeze. Space pimp Lando is supposed to be pansexual, but that is simply to say he is an actor. His droid has a sassy black Communist woman trapped inside it. Emilia Clarke’s Qi’ra is supposed to be something completely new: a strong, badass woman. But she’s actually no MaRey Sue. She’s simply treacherous and backstabbing. The leader of the marauders has a face from the National Geographic miscegenation issue. And so forth.

Like I said, I had a bad feeling about Solo going in. And as the movie unfolded, I definitely felt the absence of grandeur and mystery. But at the end, the source of my dissatisfaction was confirmed when the hologram of Darth Maul appeared to summon his servant to Dathomir. This only makes sense if one has watched the animated series Star Wars: The Clone Wars.

I was pleasantly surprised. These animated series, under the guidance of director and producer Dave Filoni, are simultaneously true to the spirit of the original Lucas films while being highly imaginative and original — and often quite deep and emotionally powerful. They are infinitely superior to all of Disney’s movies and the true heirs and guardians of George Lucas’ legacy.

Here’s my current ranking of the Star Wars movies and animated series (Rogue One sank considerably after I viewed it on BluRay):

The Empire Strikes Back
Star Wars (A New Hope)
Star Wars: Rebels
Revenge of the Sith
Star Wars: The Clone Wars
Return of the Jedi
Rogue One
Attack of the Clones
Solo
The Phantom Menace
The Last Jedi
The Force Awakens