A Quiet Place:
A Review 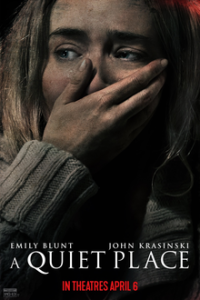 John Krasinksi, probably best known as Jim in the long-running television series The Office, is the director and star of a unique 2018 horror film called A Quiet Place. Krasinki breaks from his typical casting as a smirking “soy boy” to play a gruff and serious survivalist in this post-apocalyptic drama. The film shows us what the world would be like if Earth became infested with monsters who attack any sound louder than a certain unspecified decibel level. These monsters are numerous and they move with lightning speed. The film begins after most of the human population has already been destroyed.

The only characters in A Quite Place are a family, two parents, and their children. Krasinki plays the father. This family has managed to survive because their daughter is deaf, and thus they were adept at knowing how to communicate without sound through the use of sign language. Almost all of the dialogue in the film is in sign language (subtitled for the audience) and very quiet whispers. This makes it an unusual and tense viewing experience. The audience becomes aware of every tiny noise, and there is constant tension as various scenarios play out with the possibility that some kind of loud noise might occur, causing a monster to show up at any moment.

The story arc is typical of the monster movie genre. We understand early on that these monsters exist, yet they are rarely seen at first, although slowly, as the situation grows more dire, the full horror of their appearance is made manifest. Analogous examples include Steven Spielberg’s Jaws and Ridley Scott’s Alien. The most compelling plot point is that the mother of the family is pregnant, and as the day when she will give birth draws near, the fear of what might happen is heightened.

Without question, A Quiet Place succeeds as a well-crafted tale and a masterwork of suspense. It is utterly terrifying, but it avoids being gruesome or disgusting, unlike so many other horror films. As a piece of science fiction, it is not the kind of movie that presents challenging ideas. It is not overtly political. Whereas other stories of survival often bring together a diverse group of characters forced to work out their identity issues under distressing circumstances, this film avoids that entirely by having all of the characters be part of the same family. Their identities are intrinsically tied to one another in the most basic way possible.

Of course there are conflicts between the characters, but there is ultimately a prevailing sense of harmony between them. This is particularly felt because they have a special language by which they communicate and which has allowed them to survive. Their unity and their ability to work together and sacrifice are shown to be their most important values, above any sense of individuality. In one compelling scene, the wife makes the husband promise that he will do whatever is necessary to protect the children. There was never any doubt that he would, but this helps to emphasize the purpose of family. As we would say at Counter-Currents, the race must go on. Our people must survive.

My guess is that Krasinski would prefer not to have his film interpreted in racial terms, and would rather have it viewed as a presentation of universal themes, in which the family could theoretically be of any race surviving under these circumstances. Indeed, it is a simple story. We never find out why these monsters appeared or where they came from. Nevertheless, there is something distinctly white about the aesthetic presentation of how the family survives. They secure a farm and live an agrarian lifestyle that is reminiscent of that of the majority of Americans when the country was still ninety percent white.

If we wanted to stretch the film’s meaning a bit further, it should be pointed out that the monsters look like aliens from another planet. Simply put, this movie is about a white family trying to survive an alien invasion, and if they speak up, they are attacked and killed. Thus they must remain silent and learn to adapt to the conditions imposed upon them by their oppressors. Doesn’t this sound like the plight of white Americans today?

If anything, A Quiet Place is refreshing because it is a break from the constant preachiness that is so typical in entertainment media these days. It is probably the sort of movie you will want to see in theaters. The audio is subtle and requires an immersive environment in order to get the full experience. While I am glad I saw it, everything about it was so intense that it was physically uncomfortable at times. It’s not the type of thing that I would watch repeatedly.

On the other hand, if you live in an urban area and the only nearby movie theater is one frequented by noisy blacks, it might be a waste of time. Luckily for me, even though the theater where I saw it was quite full, the audience was comprised almost entirely of whites and Asians. For the most part, everyone seemed to be holding their breath simultaneously, occasionally gasping or crying out at the same moments. And yet there is so little sound in the movie that every squeak of a chair or rustle of a popcorn bag felt like an assault on the senses. I can only imagine how annoying it would be in a theater filled with Negroes.

Although it is by no means the worst of what our people have to face, noisy Negroes at the movies are just one of the little things to which we have to adapt and cannot speak out about. One wonders how bad it has to get before white wives begin urging their husbands to promise that they will do whatever is necessary to protect their children. If this film is any indication, it means that things have to get pretty bad. Let’s hope all the soy boys turn into survivalists soon.