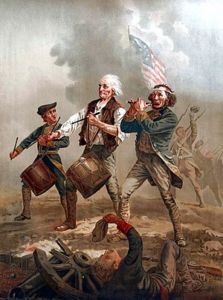 History is important, American history particularly so. For better or worse — and I still don’t know if it’s for better or worse — everything America does and fails to do affects the world. President Clinton was very cautious about getting involved in the Yugoslav Wars of the 1990s because he was thinking of the Vietnam War. George W. Bush went on to attack Iraq because he was thinking of the “lessons” of the Second World War.

There is an oft-repeated cliché that those who forget history are doomed to repeat it. I don’t believe that is true at all. One can know a great deal, even the trivial things like who shot who at the OK Corral, and none of that necessarily applies to one’s present dilemma. All the understanding of history can really do is, at best, give someone a decent pattern to follow given some particular circumstance. Usually it only gets one to the starting line. Nonetheless, getting to the starting line is a big advantage.

Someone who knows everything about an event in the past, but not about anything else, can create some very bad outcomes. Consider Condoleezza Rice, George W. Bush’s affirmative action National Security Advisor. She knew some history, but interpreted everything through the lens of “civil rights” and the narrative of the era of slavery. Her advice and her motivations were often centered on the 1963 Birmingham church bombing. While she understood how all that applied to modern America’s never-ending racial reckoning, she didn’t seem to understand why the 1389 battle at the Field of Blackbirds mattered to the Serbs or how the 843 Treaty of Verdun still impacts Western Europe today. Probably in her mind, King Henry VIII’s break from Rome was a white thing that had nothing to do with Brexit.

Am I taking a cheap shot? Possibly, but I don’t think so. All diplomatic decisions that the Americans have made in the moral paradigm of “civil rights” have gone poorly.

Several outstanding books about American history are the following:

Albion’s Seed: Four British Folkways in America by David Hackett Fischer. This book demonstrates that America’s regional differences go all the way back to English regional differences in the colonial seventeenth century. There are other books that follow up and improve on this theme, but this book is the foundation. It also shows that patterns of settlement from colonial times are the reason for so many of the misunderstandings and tensions in the United States today. Should one be an old-stock colonial American, one can read this book and gain a great deal of insight into one’s ancestors’ origins and motivations.

Other good books along these lines are The Conquest of a Continent by Madison Grant, The Eleven Nations of North America by Colin Woodard, and The Island at the Center of the World by Russell Shorto.

Notes on the State of Virginia by Thomas Jefferson. This outstanding document is the Doomsday Book of the Old Dominion. It offers an enlightening snapshot into the state’s conditions immediately after independence from England. Jefferson’s evergreen insights are on the subject of race realism. His descriptions of sub-Saharans remain as true today as they were in the eighteenth century. He even describes vitiligo and albinism among sub-Saharans and discusses whether that condition is passed on to children. His most accurate prediction was that the sub-Saharan population would be a massive destabilizing force in America:

Deep rooted prejudices entertained by the whites; ten thousand recollections, by the blacks, of the injuries they have sustained; new provocations; the real distinctions which nature has made; and many other circumstances will divide us into parties, and produce convulsions, which will probably never end but in the extermination of the one or the other race.

Extermination hasn’t happened on a grand scale, but there has certainly been such at the local level, in the form of white flight and ruined cities. The convulsions never seem to end.

Battle Cry of Freedom by James McPherson. The best Civil War historian is Bruce Catton, but Prof. McPherson’s book is a really good overview. I’d recommend this book to a foreigner who wanted to learn about the Civil War. The Civil War is America’s greatest disaster and it is important to study it. Perhaps the most interesting thing Prof. McPherson says is that Southern society was not really that unique; it was the Yankees who were unusual. Almost nobody else was building an innovative industrial society quite like theirs.

There is also From Sea to Shining Sea by Robert Leckie. This is a great overview of American expansion up until the Mexican War.

The End of the Myth by Greg Grandin. This book shows that social, racial, and economic matters create considerable pressures within the United States. Of all these pressures, the racial one is the most dangerous. This book implies that it is white reaction to racial pressures that are the most carefully managed by the Establishment. Past presidents sent their dissatisfied whites to fight in wars to expand the American frontier. Ronald Reagan repurposed far-Right activists to fight against Communism in Central America. Today, the frontier is certainly closed. Donald Trump’s border wall was an enormous admission to this fact. Indeed, President Biden, Trump’s illegitimate successor, has continued to build parts of the wall, although the border is not being secured at all. Time will tell how this change in circumstances will work out. Dissatisfied whites are staying at home.

A Grand Delusion: America’s Descent into Vietnam by Robert Mann. This book describes the step-by-step series of decisions and assumptions that brought the United States into the calamitous Vietnam War. It even goes into the results of the Congressional elections in the decades preceding LBJ’s decision to send in the US Cavalry. Most books about the decision to go to war in Vietnam claim that it was Johnson, with his big ego and hubris, that brought about the war. That may be true, but A Grand Delusion shows that a leader who appears to have a broad mandate can be trapped in a box made by the cumulative decisions of others.

The War that Made America: A Short History of the French and Indian War by Fred Anderson. The French and Indian War was one of four wars between the Anglo-Americans and their Indian allies and the French and their Indian allies. The first three were King William’s War, Queen Anne’s War, and King George’s War — Benjamin Franklin’s loyalist son William served as an Army Captain in King George’s War. But the first three wars were small compared to the global conflict that included the French and Indian War. The War that Made America is a page-turning account of that conflict. What one must remember is that every mile traveled at the time was accomplished with muscle or wind power alone. Thus, the British and Anglo-American victory in that conflict was a considerable accomplishment.

Unfortunately, I can’t point to a great book about the American War of Independence. I did read one in college, but don’t recall its name or the author. The War of Independence has unfortunately been interpreted as a universalist triumph of “freedom.” All that was war propaganda, though. The real motive for the war was that Anglo-Americans didn’t want to lose access to the Ohio country and the West. British policy, as interpreted at the time, was to give the Ohio country to Quebec and set up vast Indian preserves. Freeing the slaves was also not a goal; the real abolitionists at the time were British. The war was fought for those Anglo-Americans in the 13 colonies and their posterity. The revolution whose goal was a universalist triumph of “freedom” was the French Revolution that occurred shortly thereafter. It turned into a bloodbath.

Alien Nation: Common Sense About America’s Immigration Disaster by Peter Brimelow. This book is a history of American immigration, but it also points out the ongoing problem that is the 1965 Immigration Act. One day this book will be an important work; the only question is whether America will remain a white country or succumb to becoming a Brazil-style colony of the Third World.