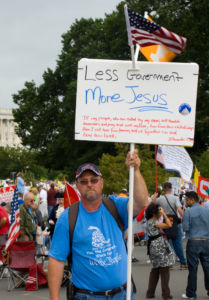 “Christian nationalism” has gotten a lot of attention over the past two years. It’s one of those things we’re told is a serious problem in our country. Christian nationalists are accused of a whole lot of bad things, from racism to threatening democracy. Books and articles are regularly published to document this menace and warn Americans of these dangerous extremists.

“Christian nationalism” effectively replaced “Alt Right” as the scary label for the Right. It is funny how that came to be, since many of these same people bemoaned the “post-Christian” Right brought forth by Donald Trump. That menace went down the memory hole, and now Christian nationalism threatens our country.

But what exactly is Christian nationalism? Many of our allies, such as Andrew Torba, adopted the moniker and say it’s the future of America. While the media is pretty loose with what it claims is Christian nationalism, there is a distinct movement that qualifies as such — and it’s not something that would appeal to the Dissident Right.

That may shock identitarians. For them, Christian nationalism may evoke the Knights Templar, cathedral aesthetics, and healthy families protesting degeneracy. They think it’s an ideology that can easily be racialized and used to defend white people. They also may think it would be a natural enemy of non-Christian interlopers and would dismiss the silly term “Judeo-Christianity.”

These people would be mistaken, however. In reality, Christian nationalism is an evangelical, multiracial, philo-Semitic circus that repulses young middle-class people. Its core demographic is those over 40, and it’s not the future of American politics. It’s a strange revival of the Religious Right mixed with the worst aspects of Trumpism.

The poster boy for this is Pennsylvania state Senator Doug Mastriano, who just won the Republican Party’s gubernatorial primary in the state. Mastriano, despite his Italian surname, is a fire-and-brimstone evangelical who believes his enemies are demons. Here’s an example of the style of Christian nationalism he espouses:

The Shofar Army took the stage, nine white men and one woman draped in fringed Jewish prayer shawls, each clutching a ram’s horn — the instrument traditionally sounded on the Jewish high holidays.

“Blow the trumpet in Zion! Sound the alarm on the holy mountain!” bellowed the leader. “The day of the Lord is here!”

He blew his shofar three times, and the crowd responded as instructed with “Arise, oh Lord, let your enemies be scattered.” The rest of the Shofar Army blew theirs in unison.

So began a two-day, far-right Christian gathering last month called “Patriots Arise for God and Country.” The event, at a Gettysburg hotel, was organized by Francine and Allen Fosdick, self-described prophets who have promoted the QAnon conspiracy theory that falsely accuses Democrats of being pedophiles who control the country.

Mastriano was the keynote speaker at the event. Here are some other highlights from the Philadelphia Inquirer’s report on Mastriano’s brand of Christian nationalism:

Mastriano often invokes Esther, the biblical Jewish queen who saved her people from slaughter by Persians, casting himself and his followers as God’s chosen people who have arrived at a crossroads — and who must now defend their country, their very lives.

“It is the season of Purim,” he said at a March event in Lancaster, referring to the Jewish holiday celebrated in the Book of Esther. “And God has turned the tables on the Democrats and those who stand against what is good in America. It’s true.”

Mastriano has been featured at events with leaders of a charismatic strand of Christianity known as the New Apostolic Reformation, which places an emphasis on “spiritual warfare” and portrays its opponents as literal demons. They see the shofar as a spiritual weapon. . . .

Mastriano ran unsuccessfully for Congress in 2018 and was elected to the state Senate the following year. During the state Senate campaign, his opponent highlighted Mastriano’s promotion of anti-Islam content on Facebook, such as an article titled “A Dangerous Trend: Muslims Running for Office” and a meme that said Islam “wants to kill” gay rights, Judaism, and Christianity.

Does this sound appealing to you? Does the idea of old boomers dressing up as Old Testament Hebrews and blowing a giant horn seem BASED and redpilled? Does the threat Islam poses to gay rights really make your blood boil?

Besides Israelite LARPing and bad aesthetics, there’s also the lack of any racial awareness. Most of these events feature plenty of non-white faces. Mastriano campaigned alongside Kathy Barnette, the BASED black conservative whose chief campaign pitch for Senate was that she was the product of her mother being raped at 11 years old. This was a line used to attack demonic abortionists. Many of these Christian nationalist events are in fact more diverse than progressive events. Some figures associated with the movement will highlight the dangers of illegal immigration or Critical Race Theory, but it’s not their central focus. They’re in a spiritual struggle to make America Christian again.

This is not a euphemism for making America white again. The central identity they want for Americans is the Christian faith, not the racial identity of the men who built this country. What unites us is religion, not race. This identity can include all people, regardless of color. All that matters is that one professes a fundamentalist version of Christianity.

This ideal version doesn’t exist. The guys blowing the shofar are what we have.

I’ve argued many times that it’s unwise for identitarians to become explicitly religious. Yes, we all know that the majority of our guys are always going to claim Christianity as their religion. Christianity is still the faith of the vast majority of white people, and it would be stupid to wage war against it. At the same time, it does not mean we need to declare ourselves “Christian” nationalists. Ours is a primarily secular struggle to preserve our people. A lot of what fundamentalist Christians believe doesn’t align with our struggle, as in for example their worship of the state of Israel and their strange fixation on adopting non-white kids.

It’s also extremely goofy. No reasonably intelligent person is going to be inspired by the bombastic events Christian nationalists hold. Most people will think you are a crazy person if you pinpoint demonic possession as a cause of all our political troubles. It’s just a way of making us look stupid.

We’re not yet in the business of creating a mass movement, so there’s no need to pretend we’re clowns to win over evangelical boomers. It’s much better to try to win over smart, disaffected young people — and they’re not going to be won over by an Old Testament LARP in a strip mall.

« “Should War Be Criminalized?”

» Against the Negative Approach in Politics