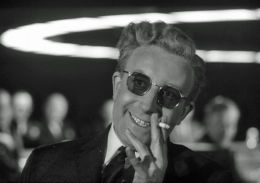 “Now I’m not sayin’ we won’t get our hair mussed. But I do say, no more than 10 to 20 million killed, tops. Uh, depending on the breaks.” — General “Buck” Turgidson, USAF, in Dr. Strangelove

Like Proust, I dip a madeleine into my tea and summon up remembrance of things past. I was pretty young when I first read that Karl Marx said that history repeats itself: first as tragedy, then as farce. Like most things, Marx got it entirely backwards. The farce comes first, then it repeats as tragedy.

If truth is the first casualty of war, then a sense of humor is the first casualty of Critical Race Theory. Combine the two and you get complete and utter insanity. In the past week, I have noticed that in the accelerating lust for war, the Uni-Party and its media lackeys have been engaging in some rather unsubtle attempts at normalizing nuclear war. One randomly encounters articles and “experts” on talk shows suggesting that nuclear war may not be as bad as originally thought, or that the concept of “nuclear winter” may be overblown.

It’s interesting that the same people who just last week were saying that if I use a gas-powered lawnmower to cut my lawn I will personally be responsible for killing every polar bear in the world now see the environmental costs of a full-blown nuclear war as being minimal, or at least worth it if we can save the world for gay marriage, pederasty, gender fluidity, and all of those ideas that define us as a democracy. Even being a constitutional, Judeo-Christian conservative who totally supports the State of Israel means that you must be in favor of nuclear war, or else you’re a traitor and probably hate the Baby Jesus. Just ask Ted Cruz or Lindsay Graham. If either one of them were President right now, that red nuclear button would be worn out from being overpushed.

I know that most politicians are either evil or stupid, or both evil and stupid, but can anyone really be that evil and/or stupid? Even the leaders of the former “Evil Empire” knew that a nuclear war was unwinnable, because even if you come out on top you inherit a world that is not worth winning.

I’m old enough that I remember the Cuban Missile Crisis very vividly, especially the “duck-and-cover” drills in which the magical properties of an elementary school desk circa 1962 somehow provided complete protection against the percussive force and radiation produced by the explosion directly overhead of a two-megaton hydrogen bomb. My classmates and I were bright enough to know, even at that early stage in our intellectual development, that this was pure BS and that living near a large Air Force base meant that we would be among the first to fry if the bombs started dropping.

All of this brings me back to my original point. Evil Democrats and stupid Republicans: For the love of everything that is good and holy, please heed my words. Dr. Strangelove is a satirical comedy, not a documentary or how-to video on YouTube. I know that all of you are victims of the dumbed-down American educational system and a sick society infected by the humorlessness of Leftism, feminism, and Critical Race Theory, but playing out the Strangelove Scenario is a suicide pact. Trust me.

Also, when Wile E. Coyote runs off a cliff, he really falls down immediately. He doesn’t stay suspended in the air for several seconds in order to pull out a sign saying “Oops.” In fact, Wile E. Coyote doesn’t really exist. He is a fictional character in a children’s cartoon series.

I know, it’s a lot to take in, but the grief counselors and emotional support dogs are standing by.