The Year that Wasn’t 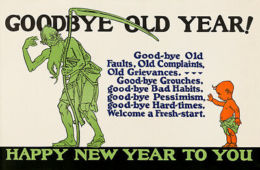 I’ve been sitting at the keyboard for hours trying to think of something nice to say about 2021, and the only good thing I can say is that it’s almost over.

It certainly wasn’t as dramatic as 2020, but only in the sense that being told you have cancer is more dramatic than cancer’s slow, inexorable progression. This year was merely a thudding, numbing extension of everything bad from last year. It was only notable in that it marked a slow-motion continuation of everything that went wrong in 2020. Hemingway famously said that bankruptcy happens gradually, then suddenly. Last year was when the slow, generations-long decline of the United States entered the “suddenly” phase. To make it all immeasurably worse, this year the “suddenly” phase was merely extended, stretched out like saltwater taffy being pulled in slow motion for maximum mental torture. It’s like being trapped standing motionless and forced to watch as a bullet approaches you at five miles an hour.

Everything — from postal delivery to getting a doctor’s appointment to acquiring that part you need to fix your lawnmower — took longer this year.

The mentally retarded level of political polarization got worse. There are no ties that bind the people in this country together anymore. Consumerism is all we share, and life in America in 2021 felt like one aimlessly stupid Black Friday brawl at Costco — but with everyone wearing masks.

The white male entirely disappeared from TV and print advertising. A visiting Martian, exposing himself only to the media, would assume that earthlings had killed off all the white males sometime late in 2020.

January 6 was when all white Americans became terrorists, despite the fact that nearly all of the white people involved in January 6 took great pains to distance themselves from the very idea that they’re white. As foolhardy as that entire incursion into the Capitol Building was, the government and media’s hysterically draconian response was even more appalling. And whatever the Capitol incursion was intended to achieve — assuming, perhaps wrongheadedly, that the perps had even bothered to think about a goal — it didn’t stop the installment of a senile, anally incontinent, remote-controlled embarrassment of a President, and one who was installed from behind barricades and barbed wire and protected by thousands of National Guard troops. This should disturb anyone who thinks, against all historical evidence, that it matters much who’s President at any given moment. But if the Trump era taught people anything, it’s that no matter whom you vote for, the government still gets elected, and the President is merely a sort of concierge meant to distract you from who’s really pulling the strings.

I’ve been trying to think of anything that improved in 2021, and I’m drawing blanks. While I allow that this may be my fault, I tend to blame 2021.

I’m not sure what else to say about 2021 except I’m glad I got out alive. Then again, I’m typing this with two days left in the year.

Everyone knows the world’s going to end one day, but no one ever seems to think it will happen during their lifetime. Perhaps 2020 represented the stabbing, 2021 was the bleeding-out, and 2022 will bring the autopsy. Maybe 2020 was when the dam broke, 2021 is when the water slowed down to a trickle, and 2022 will be when a drought is finally declared.

Like misbehaving teenagers, we’ve all been grounded and sent to our bedrooms to mope. The lockdowns have been going on for almost two solid years now, and they’ve only served to shove people further down the digital hole, where everyone grows more alienated the more “connected” they are and where we’re all developing a currently dormant case of collective PTSD that could explode given the right trigger.

A friend of mine who’s never been wrong about anything in the quarter-century I’ve known him used to insist that the forces of nature would one day intervene and compel the cultural pendulum that has lurched ever so leftward for generations to swing back the other way. Now he says he was wrong about that.

Regardless of everyone being wrong about everything, people are more stupidly confident in their ill-conceived political opinions than they ever were before. Even worse, most people seem convinced that they came up with those opinions on their own.

I realize this is all a bit of a bummer, no? Experience would tend to steer a discerning soul toward cynicism rather than optimism. It seems weak to be hopeless but foolish to be hopeful, and I’d rather be paranoid than gullible. False hope leaves me feeling empty and betrayed. I’d wish you a happy New Year, but wishful thinking has never worked for me in the past. I feel it is unethical to give people false hope. After all, things can always get worse, and life never ends well.

Then again, it’s a bit of a dick move to unnecessarily depress people. As grindingly frustrating as life can be, I would imagine that death gets boring after a while. So I’ll try to craft the remaining paragraphs so that they sound more like a homily for 2021 than a eulogy.

If my long, long life has taught me anything, it’s that it’s far easier to change oneself than it is to change the world. At the risk of being accused of committing the Sin of Individualism, I try to be realistic about what I can and cannot change, and most of what I can change involves myself. When I say there was nothing good about 2021, I’m referring to the outside world. There were some moments of great happiness in my personal life and in the lives of those I care about. And at the risk of committing the Sin of Corniness, I hope that 2021 brought some bright spots for this site’s readers. Should you accidentally stub your toe on some happiness in the New Year, I’d counsel you to savor it for all it’s worth.

The missus and I will stay home on New Year’s Eve and probably fall asleep before midnight like we did the past two years. And them some gangsters and yahoos in this little lakeside community will wake us up at midnight with a half-hour of uninterrupted “celebratory” gunfire.

At least here in the Northern Hemisphere, every year ends during its darkest days. Anyone who claims to know how next year will unfold is lying. If I know anything about what other people know, it’s that none of us knows what’s going to happen. We’ll just have to grit our teeth and walk straight into the blizzard despite the fact that we can’t see more than three feet in front of our faces, hoping that there’s something better on the other side.

For every year that I’ve been alive, springtime always follows winter, just as morning always follows night. If I don’t accidentally bump into a yeti in the midst of the long winter blizzard, maybe things will turn out okay. As foolish as it is to hope things get better, only an asshole would make things worse than they already are. My New Year’s resolution is to be a fool rather than an asshole.