This is the Normies’ Fight 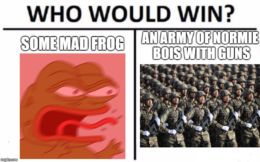 It is a relatively easy proposition to send a car over the Grand Canyon: Just put the transmission into neutral and a small push will send the car careening over the edge. Once this process has begun, however, it is almost impossible to suspend.

The same principle obtains to history. It doesn’t take that much to set a historical process in motion. A single piece of mundane legislation, a single executive decision, or the results of a single election can alter history in a vast multitude of ways. Controlling the course of history, however, is almost impossible, since it is a calculus composed of an almost unlimited number of variables that are far beyond the comprehension of any human being.

As such, we err if we ascribe inevitability to the outcome of a historical process begun with malicious intent. The oligarchs of Davos, the despicable leaders of the anti-white Left, and the feckless and savagely ignorant political class of the Uni-Party have the power to initiate events, but they have almost no power to control the events that they have set in motion.

When the Covid-19 pandemic began and the public schools began to offer classes online, I wrote that our Leftist overlords would rue this day because it would finally allow parents the opportunity to see and hear what really goes on in American classrooms. The unintended consequences of online schooling have spectacularly backfired for the Left, as witness the recent Virginia elections. The vast majority of American parents would have never known about critical race theory had it not been for the Left’s insane desire to put the country under “house arrest.”

Many colleges and universities are experiencing existential losses in students and revenue. Numerous arts organization with marginal finances have gone out of business for good during the pandemic, and the draconian mask mandates and vaccine passport requirements have greatly reduced attendance (and revenues) at artistic events throughout the country. The woke oligarchs have managed to secure the greatest transfer of wealth upwards in recorded history while beggaring their pansy woke cheerleaders in the education and arts establishment.

Even genocidal population reduction proponents like Bill Gates and Klaus Schwab have seen their dreams fall apart. Rather than providing a permanent platform for societal control, the vaccinations are proving not only ineffective, but also accelerants for the further and more deadly mutation of the Covid-19 virus. In many demographic categories, there are now more deaths from the vaccination than from Covid itself. There is also great concern that the long-term side effects of the vaccination will be quite deadly. Since a greater percentage of the woke have been vaccinated than the un-woke, this may turn out to be a case of the Left being hoist on its own petard.

The Left, however, does not mind its own petard-hoisting inasmuch as it gives itself an opportunity to virtue-signal. Leftism is an escape from reality and is based on emotion, not reason. As such, the Left cannot control itself. The lawsuits against the organizers of the Charlottesville rally are a case in point. There are few political events that have been more ill-conceived as Unite the Right. Dissident politics of any sort tends to attract unbalanced characters, and the Dissident Right has not been immune from this tendency. By sidelining its fringe elements, the Left has unwittingly purged the Dissident Right of its most unsavory element; and make no mistake about it, the purging of this unsavory element eventually would have had to be done, anyway. It is in a much stronger position without Sieg-Heiling fratboys, off-their-meds lunatics, and Stahlhelm-wearing stormtroopers with mother-in-law fetishes.

The Left has done a favor to our movement by removing this unsavory element. This goes a long way toward explaining why the recent American Renaissance convention was so pleasant and why there were so few protesters present. It also demonstrates the significance of Michelle Malkin’s speech at AmRen. Normies are coming over to our side not because of street actions taken by the worst elements of the Dissident Right, but because traditional conservatives are beginning to realize that its reality-based politics as adumbrated by American Renaissance, VDare, and Counter-Currents are correct. Lacking the easy targets of the Dissident Right’s lunatic fringe, the Left has now begun to focus on the traditional normie-cons. Indeed, the Left makes no distinction between George Lincoln Rockwell wannabes and the normally apolitical soccer mom who never really liked Donald Trump but thinks that critical race theory is a bad idea and should be expunged from the public schools.

The Dissident Right has not and will never be large enough to effect radical political change by itself. It cannot impose its will on society at large; it can only offer an alternative to the madness of the anti-white postmodernist era in which we have the misfortune to live. We are not in control of history, but neither are our opponents. We are, however, in an enviable position, as the historical processes initiated by our opponents are ironically red-pilling the normie-cons and driving them into our bosom.

It is not yet the time for the Dissident Right to assume the vanguard in the coming political struggle. This is the normies’ fight. The wrath of the anti-white Left needs to be directed solely at the normies. The red-pilling of ordinary white Americans has to precede the creation of any ethnostate.