The Eternal City, the Ruined City, & the Battle of Cannæ 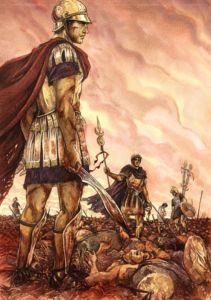 And I have in mine owne bowels made my grave, That of all nations now I am forlorn, “I was that citie that the garland wore . . . delivered unto me By Romane victors, which it wonne of yore; Though not at all but ruines now I bee, And lie in mine owne ashes, as ye see.”[1]

There was that memorable scene, played again and again in every age. That vision of ruin at the moment of triumph. So did Napoleon later look out on the vale leading down to the Olomouc Road and see that the hunt after honor had reared a trophy for “devouring death.”

« A January 6 Protester’s Plea from the DC Gulag

Conservatives are from Mars, Liberals are from Uranus »