Superstitious Minds: The Importance of Nathaniel Hawthorne’s The Scarlet Letter 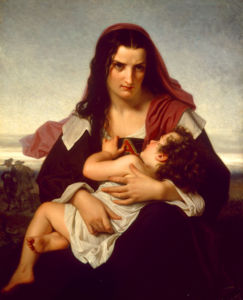 It might be, too, that a witch, like old Mistress Hibbins, the bitter-tempered widow of the magistrate, was to die upon the gallows. In either case, there was very much the same solemnity of demeanour on the part of the spectators; as befitted a people amongst whom religion and law were almost identical . . . — Nathaniel Hawthorne, The Scarlet Letter

The superstitious mind is a powerful thing. It manages fear and apprehension. It gives sensible answers to unanswerable questions. It helps form a moral hierarchy for a society as well, justifying correct behavior and punishing incorrect behavior. This is a great stabilizing force, and a crucial one in those places where Nature as Nemesis can wreck entire societies through disease, famine, and disaster. But when this moral hierarchy runs counter to human nature or creates loopholes for evil, then a person possessing a superstitious mind can go mad. Therein lies tragedy.

This describes the psychological backdrop of Nathaniel Hawthorne’s The Scarlet Letter. To Hawthorne’s credit, however, this backdrop does not apply merely to the Puritans of seventeenth-century Boston, but to our time as well. The superstitious mind can establish a sense of order where otherwise there would be chaos. On the other hand, sometimes such order is that of a prison, and in comparison, a little chaos wouldn’t be such a bad thing after all.

We begin with the mysterious and beautiful Hester Prynne exiting the jail “in prison lane” and being escorted by a beadle to the marketplace. She is to stand upon a scaffold for a set time to express her disgrace and shame before the public gaze. She is being punished for bearing a child out of wedlock — the very child, Pearl, whom she holds in her arms. Embroidered on the bosom of her dress, defiant in its artistry, is the scarlet letter “A.” Her beauty and aplomb enraptures the mob, while the carnal nature of her manifest sin appalls it. No one present can reconcile these opposing emotions, so the crowd remains steadfast in is awe.

Hawthorne, ever verbose, calls upon the Christian mythos to help describe the indescribable. Hester embodies “that sacred image of sinless motherhood, whose infant was to redeem the world.” And yet:

. . . there was the taint of the deepest sin in the most sacred quality of human life, working such effect, that the world was only the darker for this woman’s beauty, and the more lost for the infant that she had borne.

Hawthorne is pitiless when depicting Hester’s self-appointed judges in the crowd, especially the female ones. He notes how these “goodwives” are both ugly and vicious, and how the ugliest of them all is calling for Hester’s execution, claiming that she had “brought shame upon us all, and ought to die.”

After stepping off the scaffold, Hester vows to continue her life “at the scene of her earthly punishment.” Where many would have fled and started over as a stranger in another colony where no one knows his guilt and shame, Hester confronts the Puritan establishment head-on. Where they see her scarlet letter as glowing “red-hot with infernal fire,” she sees it as a badge of honor — but a preternaturally heavy one:

. . . and so, perchance, the torture of her daily shame would at length purge her soul, and work out another purity than that which she had lost; more saint-like, because the result of martyrdom.

Soon we are introduced to the old and calculating Roger Chillingworth, a misshapen physician who technically remains Hester’s husband. The pair take an oath not to breathe a word of their union and Hester’s faithlessness to anyone. However, when noting Hester’s insistence upon wearing her scarlet letter, even when she sleeps, he smiles. She suspects black magic and inquires if he, her husband, has “enticed me into a bond that will prove the ruin of my soul?” Then Hawthorne tells us:

“Not thy soul,” he answers with another smile. “No, not thine!”

That someone else’s, of course, belongs to the young clergyman Arthur Dimmesdale, Hester’s lover and Pearl’s true father. We take the measure of this man when he intervenes on Hester’s behalf in the presence of Chillingworth and the colony’s governor. They wish to take Pearl away from her, because the little girl is considered a devil child in Boston’s superstitious minds and is not in thrall to fundamentalist Christian dogma as children should be. Dimmesdale puts a stop to that.

Despite this clergyman’s manifest honor and kindness, we learn that he soon yields to the diabolic ministrations of the physician, Chillingworth. Wracked with guilt for his dishonorable union with Hester, and bearing full responsibility for the poor woman’s fall from grace, Dimmesdale embodies the scarlet letter (which he may or may not have carved onto his chest), whereas Hester’s is merely on her clothing. Where she embraces her shame in the light of day — and with all the effort that that requires — he keeps his hidden, and it eats away at his soul. And, like many a good nineteenth-century novel, one’s soul is synonymous with one’s physical health.

Chillingworth, in his “quiet depth of malice,” knows this and makes sure that whatever medicines he prescribes to the afflicted clergyman will act as poisons and hasten his death, but not before his patient’s protracted suffering.

And suffer he does. Sickened by having to live a lie, Dimmesdale even tells his congregation that he is “utterly a pollution and a lie” and that he is “burdened with the black secret of his soul,” but fails to disclose the exact nature of his corruption and mendacity. As a result, the people love him more — and the more they love him, the more Arthur Dimmesdale despises himself. His reticence is not mere cowardice. He desperately wishes not to implicate Hester further because, if Roger Chillingworth so wishes it, the gallows could follow for them both. Religion and law as one and the same, indeed.

Any astute twenty-first century reader can see where this is going. Still, I won’t give spoilers for anyone who hasn’t read this prescient and perspicacious work of fiction. The essential conflict entails an intolerant and superstitious public versus Hester and Dimmesdale, two exceptional people who ran afoul of these superstitions, but are “backed by the sympathies of nature.” And it is their latent belief in these superstitions which threaten to drive them — and especially Dimmesdale — mad.

Fast-forward three-and-a-half centuries from the story’s time and we find an eerily similar scenario playing out in mainstream Western society. Racial and gender egalitarianism — a complete reversal of the dogma of the past — have become the ascendant superstitions of the present. The “goodwives” who muttered vengeful oaths against Hester Prynne have become the cat ladies and Karens and transgendered non-binaries of today who police the politically incorrect and relish in their cancellation. Roger Chillingworth is the seventeenth-century equivalent of today’s university professors who inject Marxist poisons into the minds of their student victims and foster racial loathing in them. A white person who is considered racist in today’s West might as well be pilloried on a scaffold and made to wear the scarlet letter “R” on their chest for the rest of his life.

As Hester Prynne well understood, running afoul of these superstitions can cause someone grievous harm — either to their reputation, livelihood, or to their very person. Also, as we’ve come to realize in the twenty-first century — starting perhaps with George Floyd in 2020 –, calling superstitions into question can end up putting one on the wrong side of the law. This, of course, is because Western civilization is reverting to the superstitious condition of seventeenth-century Boston, where religion and law were indeed the same thing. How else to explain Officer Derek Chauvin’s incarceration and Officer Philip Brailsford’s exoneration? In the former case, a black felon died of a drug overdose while being restrained by a white police officer. In the latter, an innocent white man was murdered in cold blood by a white police office with the words “You’re fucked” engraved on his rifle. Because of the superstition of racial egalitarianism, whites having anything to do with the death of a black is taboo, while whites killing other whites is not.

Both Hester Prynne and Arthur Dimmesdale were honorable people who had a profound sense of right and wrong. As a result, they harbored feelings of guilt for their sin of adultery. And make no mistake, it is not unreasonable to call adultery a sin. Superstitions often stem from a measure of truth, and having them act as a safeguard against illegitimacy and the breakup of nuclear families makes sense. One should feel guilty for committing adultery — especially if the act produces a child.

However, while some sins are so heinous they can negate a person’s humanity, adultery is not one of them. The Puritans of seventeenth-century Boston, at least as Hawthorne portrays them in The Scarlet Letter, do not realize this and are willing to throw the book at otherwise good people who were merely guilty of going a little too far in doing what men and women do naturally. Both Hester and Dimmesdale do not turn around and accuse their society of this sin in response, even though their society’s sin is worse than adultery. As a result of this lack of confidence, they both suffer unfairly. Perhaps this is one of the conclusions Hawthorne hopes we draw after reading his novel.

Then again, perhaps Hester and Dimmesdale lack this confidence because there is truth behind the ancient proscriptions against adultery. If you don’t punish adultery, you will get more of it. And widespread adultery, as common sense tells us, is bad for any society. The Scarlet Letter Puritans certainly took it too far, but that doesn’t mean they didn’t have a point.

Compare this, on the other hand, to today’s superstitions regarding racial and gender egalitarianism. There is no truth behind them. Our ruling elites who enforce these superstitions have no point all; only lies. They have all the intolerance of Hawthorne’s Puritans and none of their common sense. They don’t deserve the esteem that a scarlet letter, borne either internally or externally, would afford them. I imagine that if Arthur Dimmesdale were alive today, he’d give sermons decrying our elites’ deceitful superstitions, while Hester Prynne would rip that letter off her dress and throw it back in their faces.