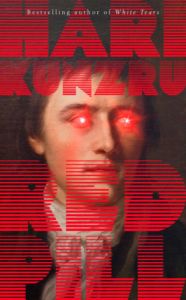 Though its origins lie in the big-budget science fiction film The Matrix, the now-infamous term “red pill” has recently undergone a subconscious attempt by center-of-the-Overton-window content creators to reclaim it from its primary users: the internet-based Dissident Right. This general effort is juxtaposed on top of the Left’s own term that — in the broadest sense — basically means the same thing: “woke,” and its transformation into an increasingly identifiable pejorative. To be red-pilled is to be included in an underground in-the-know, while meanwhile, public libraries have woke sections for children . . .

Some recent terminology grift efforts are the 2016 documentary The Red Pill, a story about a failed-actress-turned-woman’s-rights-activist who learns the dark side of her feminist identity; Maroon 5’s 2017 album Red Pill Blues; and now Hari Kunzru’s latest novel Red Pill. (See also the two Counter-Currrents reviews of Blake Nelson’s 2019 novel, The Red Pill, about a Portland liberal who delves into the manosphere.)

Like similar Trump-era mainstream works of fiction that touch on the Dissident Right, Kunzru’s requisition of the term reveals that, yes, there is something cool, authentic, and edgy occurring outside the purview of liberal cultural institutions, but don’t worry: It’s still bad. Furthermore, the book seems to be more of an expose of liberal impotence in the face of a resurgent cultural Right rather than an actual diagnosis of the inherent fallacies of the Left’s ideological core.

The story begins with an unnamed protagonist in the early stages of an undiagnosed mid-life crisis. He’s half-Indian, half-English, and fits the bill of your standard neoliberal writer: lives in Brooklyn, is married to an Asian lawyer who works for an immigration non-profit, campaigns for the Democratic Party, and — though smart — wastes his intelligence writing about silly crap. His latest project, a book idea “about the construction of the self in lyric poetry,”[1] lands him a three-month fellowship at a place called the Deuter Center in a posh suburb of Berlin.

Upon arrival, his new book idea is quickly torn apart by another fellow at the center named Edgar. Edgar is a bombastic, under-the-table anti-liberal, and seems to be modeled on the type of Dissident Right intellectual who would be a member of the H. L. Mencken Club. This is an early view of how thin-skinned and hollow the narrator is: Rather than retooling his manuscript or starting a new project, he sulks around the conservatory and wastes time. In the nearby town he finds a statue of the German poet Heinrich von Kleist, who he begins to obsess over. Describing Kleist as a proto-incel, the protagonist fails to realize that, with the exception of having a wife and child, he too acts like an incel: moping around, eating take-out alone in his room, watching TV shows all night on his laptop, and generally avoiding responsibility. It is also in this phase of the story that the author makes reference to the Jewish Question, and credit must be given where it is due: he waited an entire 26 pages before bringing up the JQ in a book that mostly takes place in Germany; it must have killed him to wait so long.

What pushes the protagonist further into crisis is not the failure of his new book idea, but a chance meeting with another character, Anton. Our narrator attends a benefit party in Berlin for recent migrants from Syria and Afghanistan. The front of the building is covered in the life preservers worn by migrants making their way across the Mediterranean, and the guests wear survival blankets over their suits and gowns; all the while, actual migrants eat out of dumpsters outside in the cold. The entire description of the party makes the reader think that Kunzru had a magic crystal ball where he could see congresswoman Alexandria Ocasio-Cortez’s outfit at the 2021 Met Gala. Anton, a TV show creator with a worldview loosely similar to Bronze Age Pervert’s with some accelerationist aspects added in, befriends the narrator at the party and invites him to a street-food dinner with some friends. There it is revealed that Anton expresses anti-immigrant views, to which the protagonist again shows us how thin-skinned he is: Rather than debating Anton, he informs the group that they’re all racist, tells them to fuck off, and abruptly leaves. Before he can go, Anton says:

Your weakness . . . is that you’re always surrounded by people who think just like you. When you meet someone who your silly shame tactics don’t work on, you don’t know how to act. I’m a racist because I want to be with my own kind and you’re a saint because you have a sentimental wish to help other people far away, nice abstract refugees who save you from having to commit to anybody or anything real.[2]

This rocks the foundation of the main character’s liberal worldview. “I didn’t want to admit it,” he says, “but the things he’d (Anton) said hit home. Was I just a squeamish intellectual, incapable of action?”[3] A follow-up interaction with Anton causes additional stress and rage, and from there the protagonist becomes unglued. He loses his fellowship and stalks Anton to a film premiere in Paris, where more shaming attempts spectacularly fail in a public setting. More internet creeping ensues, where the narrator learns of the Great Replacement theory. This culminates in a stakeout outside a cabin on an island in Scotland where he believes Anton occasionally stays.

Realizing his nemesis isn’t coming, the crazed liberal breaks into the cabin and begins writing. Aping Nick Land’s Meltdown or name-your-Asimov story, our protagonist scribbles about “a future in which any claim of allegiance to universal human values would be swept away by a cruel tribalism”[4] with “no ‘rights’ whatsoever, just the raw exercise of power.”[5] He continues his frantic writing with an emphasis on the destructive nature of technology on the human soul, stating, “every technical advance will make our human intuitions less reliable . . . Nonhuman agents will have interests and priorities that may not align with ours”[6] and “the reduction of my most cherished mysteries to simple algorithmic operations.”[7] Under the false impression that this future dystopia is being brought about by Anton and his ilk, what the protagonist fails to accept is that it is already in place. Furthermore, it has been created by people like himself and all of the institutions he openly supports. What ideological slant does Silicon Valley have? Which legacy media outlets incessantly stoke the fires of tribalism? Sure, maybe Anton wants the death spiral to speed up so a new order can be born, but at least he’s preparing for it.

After contemplating suicide, getting arrested, and being placed in a psychiatric ward — all because he literally cannot accept that his prefabricated notions about morality are incorrect — the main character makes his way home to his family in New York. Living like an emasculated beta on medication and doing household chores all day, he is safely back in his liberal New York bubble. He is unable to tell anyone the real reason for his breakdown. After his wife carefully broaches the subject of why he wound up on an island in Scotland, he tells her he was confronting the “metaphysical danger” of “whiteness. A kind of white mysticism.”[8] He quickly avoids going into further detail, afraid he’ll spook his wife too much. Even talking about whiteness in such a household seems off-limits.

Again “surrounded by people who think just like you,” as Anton put it, our narrator accepts his steady slide back into delusion. He sees his old colleague Edgar’s new book in a window, titled Wrongthink: The Authoritarian Left and the New Religion of Social Justice (do downtown New York bookstores carry Ann Coulter-esque books? I’m under the impression they’re wall-to-wall Ta-Nehisi Coates and Robin DiAngelo), and Trump has just won the 2016 presidential election, bringing about a fear that Anton’s world is taking over. In classic liberal paranoia, the narrator and his wife begin “trying to work out what a Trump presidency means for people like us.”[9] They wonder, “if it gets bad . . . where will we go?”[10]

History has shown how ridiculous fears like this were. The anti-Trump Left were still allowed to have spectacular protests for contrived causes and burn cities. After a massive media-government-corporate coalition formed to oust Trump, the flooding of the country with migrants has resumed (did it ever stop?) and every liberal institution has doubled its efforts to bring about the dystopia that the protagonist wrote about.

In an interview with Jacobin magazine, Hari Kunzru sheds some light on why he decided to write a story like this. He’s clearly informed on Debord’s idea of the spectacle and the Left’s current role in projecting a false reality when he mentions

. . . the idea of capital being able to seamlessly project a phantasmagoric screen in front of us that we’re mesmerized by so that we don’t notice the social conditions we live under . . . As for the shift to the right, I think it’s hard for mainstream liberals to acknowledge their own structural positions of power. And one of the bastions of liberal power is the creation of media narratives. The right wing has found themselves very much on the outs.[11]

However, he expertly absolves himself from Right-wing thought while simultaneously giving himself credit when he states, “I’d spent years . . . spending a lot of nervous, self-hating time on the far-right internet watching the chans assemble a young, vibrant right-wing culture.”[12]

Unfortunately, for Kunzru, as with most commentators anywhere left of Counter-Currents, there’s little distinction between MAGAtards, delusional QAnon idiots, Nazi frat-bois, the casual reader of Breitbart, or white people merely advocating for their own kind; they’re all “Alt Right,” which means evil and bad in our current “phantasmagoric screen.” In his Jacobin interview, this is evident when he defines the JQ as “believing the Holocaust was a lie,” as opposed to merely having a general understanding of Jewish money, influence, and massive overrepresentation in positions of Western institutional power when compared to their tiny population.

As initially stated, this work of fiction appears to be a rallying cry for neoliberals to recommit themselves (which they have) as well as refine their causes as a bulwark to whatever the next iteration of Right-wing dissent will look like. However, all they can do is double down on self-destruction and bury their heads deeper into the sand (again, already happening). “This online right views the liberal as an ‘NPC’ or non-player character in a video game, just blank, and this type of thing really does unsettle people. People don’t want to be viewed like that. They want to be cool.”[13] For a group of individuals that have complete institutional control of the spectacle generator, all they need to do is reimagine a new reality where they’re cool and original (also underway), regardless of the cognitive dissonance it creates; the protagonist of Red Pill is the perfect example.

[11] Hari Kunzru interviewed by Meagan Day, “Hari Kunzru’s Novel Red Pill Is a Literary Document of the Age of the Alt-Right,” Jacobin, 17 December 2020.

» The Revolution will Not Be Televised, but It Will Be Retarded