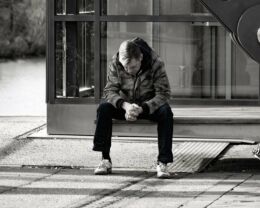 Riot-wise, it’s been a peaceful summer, at least compared to last year. But since nothing has gotten better since last year, I’ve started to wonder why that is.

The economy hasn’t improved. The country just lost a twenty-year war. The people who believe that anti-black racism is a problem still cling to that delusion with passionate intensity.

Most significantly of all, the lockdowns that we were promised would be over long ago only seem to be getting started. How long can a nation of 330 million people endure cabin fever before exploding?

Same goes for the vaccines. What seemed paranoid only a year ago now seems sensible, and I wouldn’t be surprised if sometime over the winter, troops start kicking down our doors and forcing everyone at gunpoint to submit to being hooked up to a permanent IV line that feeds us remote-controlled government-sponsored “permanent boosters.”

So why did people stop rioting?

How much of last year’s riots had to do with George Floyd, and how much had to do with people coming out of their damp caves after the first few months of lockdowns to run under the warm sun and scream with savage joy?

Why do people seem much more submissive this year than last? Is it simply exhaustion?

The buzzword in the mid-1970s after Nixon resigned, US forces escaped from Vietnam with their tails between their legs, and OPEC started jacking up oil prices was “apathy.” For perhaps the first time in American history, a populace that had been raised on the idea of American military invincibility and moral unimpeachability was forced to accept that we could be beaten and that our leaders could lie to us. It was an entirely new feeling, and not a good one. Even though we tried to whip ourselves into a patriotic frenzy for the Bicentennial, it seemed that everywhere you turned in 1976, you heard the word “apathy.”

Back then, many people escaped into hedonism: Quaaludes, angel dust, religious cults, and empty disco promiscuity. But as dismal as all that sounds, at least it had a desperate vitality that seems nonexistent nowadays. People seemed to chase pleasure instead of the vast nothingness that fills their lives today.

The general public mood these days seems to be one of listless surrender.

It’s not that people are in denial of how bad things have gotten. I’ve noticed you can hear more penetrating political opinions from ordinary service workers than from nearly any talking head on the boob tube.

While waiting at Home Depot’s customer-service kiosk the other night to get a refund on an overcharge, the fat, black-masked female desk clerk and I had a respectful discussion centered on the idea that people have been suspiciously well-behaved considering the endless gaslighting and involuntary confinement of the past eighteen months.

We all know they’re lying, but we’re all so engulfed in a blizzard of information and misinformation that it feels futile trying to discern who’s the worst liar and how much truth they’re peppering into the stew just to keep you confused and off-guard.

But why do people seem resigned to it? Could it be related to the fact that during the last two presidential elections, the side that was declared the loser was convinced the election was stolen? Are people starting to realize that voting is merely a ruse concocted to appease the rubes by tricking them into believing that their opinion matters?

Is it a malignant form of learned helplessness? Even worse, is it by design — taught helplessness? Is it some form of mass-engineered indifference?

In conjunction with his research on depression — which may actually have a biological benefit among humans and other animals in the sense that it may preserve energy you’d otherwise waste struggling to swim upstream –psychologist Martin Seligman developed the theory of learned helplessness in 1967 at the University of Pennsylvania after a study where he administered electric shocks to dogs. Some of the dogs were placed in a box with a lever that, when pressed, stopped the electric shock. Another group was placed in a box where the lever had no effect, teaching them that the shock was “inescapable.” When those dogs were then placed in the box where the lever could stop the shock, Seligman observed that they didn’t even bother; they simply accepted the shock and passively whimpered.

It is said that Seligman’s work had a huge impact on the thought of Theodore Kaczynski. Although the Washington Post version of Industrial Society and Its Future never cites Seligman and only uses the word “helpless” twice, Kaczynski directly cited Seligman in letters written after his arrest.

In a 1969 diary entry, Kaczynski wrote that “the important things in an individual’s life are mainly under the control of large organizations; the individual is helpless to influence them.” When feds raided Kazcynski’s Montana cabin, they allegedly found several written notes citing Seligman’s work. In a 2004 letter, he wrote that if “one has had insufficient experience of the power process, then one has not been ‘immunized’ to learned helplessness.”

In his essay “The Unabomber and the origins of anti-tech radicalism,” Sean Fleming writes:

Although [Kaczynski] was fascinated by the experiments on helplessness, he was unimpressed with psychologists’ interpretations of the results. As he wrote in a 2010 letter, Seligman’s Helplessness “is of central importance for an understanding of the psychology of modern man”; “Seligman, however, is too much of a conformist to draw the conclusions about modern society that can and should be drawn from his work.” In Kaczynski’s hands, the concept of learned helplessness became a mass-psychological diagnosis.

With every passing year, Kaczynski seems like more and more of a prophet.

Learned helplessness — or apathy, ennui, malaise, anomie, defeatism, whatever you choose to call it — seems to have spread like peanut butter on toast from coast to coast. Ever since the Floyd riots kicked off last year, I’ve found it intensely difficult to care about things outside my own life and the lives of those close to me. It seems blindly unrealistic to presume that anything I do would have the slightest effect on a world so hopelessly wrecked.

Or is it possible that this temporary indifference is simply a form of emotional hibernation, a way to stock up on psychological resources and then strike with full, blinding fury the moment that a glimmer of hope appears?

And is it foolish to wish that this is what most other people seem to be doing right now as well? Are they biding their time until it’s time to explode?

I’ve come very close to pure apathy many times in my life, but I always come roaring back. I’d like to have a similar confidence in society at large.

If things get worse — and I don’t know anyone who doubts they will — can we look forward to food riots? Pill riots? Or no riots at all?

Maybe I’m a hopeless romantic, but I’d rather the world go out with a bang than a whimper.

But if a whimper it must be, I doubt that it will be a short, effete sigh of defeat. I suspect it will be a thousand-year whimper that gets fainter with each passing year.

» The Military’s Culture of Careerism