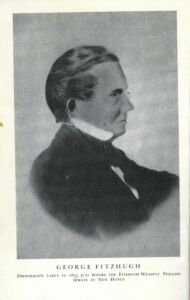 Saturday’s installment of the new and improved Writers’ Bloc, hosted by Nick Jeelvy, is now available for listening and download. His guest is Counter-Currents’ own regular writer, Kathryn S. They focus on the ante-bellum Southern writer George Fitzhugh’s classic defense of slavery, Sociology for the South. Topics discussed include:

« The Consolation of Philosophy