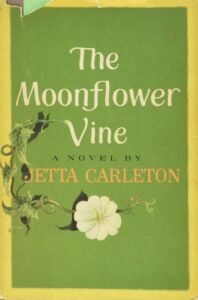 In 1962, Jetta Carleton’s The Moonflower Vine was published and immediately praised. One critic compared it to To Kill a Mockingbird, which had been published in 1960. Like Harper Lee’s book, The Moonflower Vine was the only work of its author. The novel was loved, revered, then went out of print. To Kill a Mockingbird, as we all know, is probably taught more in schools than the Bible and, to the progressive set, it is a kind of Bible.

In 2009, The Moonflower Vine was republished and went through another round of high praise from readers and critics.

It is a moving story of the Soames family: Matthew, Callie, and their daughters Jessica, Leonie, Mathy, and Mary Jo. Set near the Little Tebo river in Southwest Missouri, the narrative runs a historical tine line from the late 1800s to the early 1950s, depicting a family’s tensions and pleasures. Mary Jo, the youngest and an autobiographical version of Carleton, arrives in her sports car from New York, ready for a summer vacation with the family. Jets fly overhead from a nearby airbase. Her nephew will soon join the Air Force. There is uneasy talk about the Korean War. All of the family, especially Callie, look forward to seeing the moonflowers bloom at night, then collect wild honey on the last day of vacation.

But the preacher shows up. A local farmer was murdered by his son, and the preacher asks the family to come to the funeral, as the old man had no one to mourn him. There goes the vacation. Matthew is especially annoyed, but he is a local educator and has social obligations. The family grudgingly appears at the funeral but can’t get in because the church is packed. The murder has become a celebrity event, so after making a brief appearance, they speed off to their own holiday and watch the Moonflowers bloom.

Each member of the family has their own section of the novel. Jessica runs off with a hired hand. Matthew has intense frustration between being a teacher and farmer. Mathy, wild and spontaneous, marries Ed, one of Matthew’s most troublesome pupils. Ed becomes an aviator, takes Mathy up with him. The plane crashes and she dies.

There is Callie, the uneducated wife of Matthew who, although she admires and honors his love of books, cannot fathom them. All of these are tributaries in the great river of a novel woven with the humanity and compassion of a world close to the soil, like a Willa Cather novel, a Blut und Boden world where nature and blood intermingle and compliment the other. The Moonflower Vine captures the speech of Missouri and its rhythms. Reading it, I was reminded of my grandparents’ world.

I could once again smell their kitchens, hear chopping and sawing in the background, conversations in the backyard as fireflies lit up, and summer heat that forced you to sleep on the porch. Also singing hymns that everyone knew by heart.

Carleton’s language and imagery are immediate and powerful:

“The grave mounded gently, like a fat man’s stomach as he lies asleep.”

“The minister was an old man, dry and thin as a page in the Bible.”

“Already the leaves, yellowed by the dry summer, had begun to fall, and the locusts scraped and droned, crying wearily that all, all was lost.”

“She knew that kind of woman. Men caught them like spring colds. But they didn’t last.”

The love agonies of Matthew’s daughters reads at times like an earthier Pride and Prejudice, but romance here is viewed with a farmer’s steady eyes. Lovers fail. They die. People can’t communicate their deepest longings to those they love. Women may choose their lovers poorly, but they accept their responsibilities and go on with life. Even as Matthew’s daughters leave the farm, a part of them always stay behind and the farm goes with them wherever they wander. The richness of Missouri’s soil and life is a second skin these characters wear, and The Moonflower Vine recalls the murals of Thomas Hart Benton, where passion and life are played out in his rolling, at times oblong contours of Missouri hills and rivers.

One of the great tensions in the book is Matthew’s longing for Charlotte, a young woman visiting from St. Louis. It mirrors a problem throughout his life, becoming educated but finding no one to share it with. Callie is almost illiterate, and while devoted, is numb to literature, art, and Matthew’s devotion to learning.                     His mind wanders. Charlottes come and go in his life. He never acts upon his urges, and is faithful to Callie, but he’s torn and seeks counsel in reading Francis Bacon, but:

Yet here he was past forty, now, solid, established, a power in the community-steaming like an adolescent over a schoolgirl the age of his second daughter.

Matthew looked out on the darkening sky from the office window. “O Lord,” he said, “I’ve done it again.”

Carleton captures a middle-aged man’s sexual longing and frustration very well. The contrast between Callie and Charlotte reminded me of Murnau’s film Sunrise, where an equal struggle between city and country life was presented.

Matthew, frustrated by his hopeless romance of Charlotte, wakes up in the night and wanders his fields. He turns to finds Callie in her white nightgown, searching for him, and she forces herself on a surprised Matthew. Charlotte leaves for St. Louis. Callie becomes pregnant with Mathy.

This night is recalled by Callie in old age, when Matthew was courting Charlotte and at that time a peddler came to sell his wares. “But his eyes were black, and there was something about him that marked him, if not as a gypsy, as some sort of foreigner.”

The peddler is eccentric and charming as he tries to sell Callie ribbon. He cajoles her into giving him breakfast. Lonely without Matthew, she appreciates his company, but there is something unnerving about him. She’s relieved when he leaves.

Later, when Callie searches for a missing hen, she comes upon him in a thicket near the farmhouse. The peddler is shirtless and asleep. He wakes, smiles at Callie, and advances. Callie tries to run, is pinned down and raped.

“Don’t cry,” he said. “Let’s be happy together for a little while. You will like me. I am clean, I won’t give you a disease. I am careful. Stay With me,” he said, and his whisper roared like a seashell held against the ear.

Callie runs home sobbing. She dares not tell Matthew. Isn’t it partly her fault? Her anxiety eats at her until, that night, she sought Matthew in the field.

A rape also takes place in To Kill a Mockingbird, but in that book the rape is used as a propaganda tool to reflect on black/white relations. Here, the act is private and creeps from Matthew and Callie’s estrangement.

Of course, the question is, was wild Mathy really the peddler’s child? A disorganized girl who is always trouble. Who confounds Matthew and “From the moment of her birth she had exacted her price from him. But not in noble sums that would pay the debt quickly. She demanded it in pennies.”

The peddler is dark, foreign, and most likely Jewish. This might cancel out The Moonflower Vine’s popularity with the publishing world. Who shall we praise? Mockingbird or Moonflower? Let’s do Mockingbird.

Callie’s rape resonated with me because when I was in college I was an intern at the State Historical Society of Missouri, and one of my tasks was to prepare old newspapers for microfilming. Reading through these rural periodicals, I was struck by the amount of rapes and assaults reported on single women, especially alone on farms. Many times it was done by blacks, but there were other men, drifters and outsiders like this peddler who were caught by a posse and usually lynched.

Callie’s rape isn’t just a metaphor for a couple’s isolation, but a retelling of historical fact. This is less propagandistic than To Kill a Mockingbird’s rape.

Carleton’s storytelling is more compelling than Lee’s and less manipulative. I recall an incident in To Kill a Mockingbird where a mad dog is seen on the street and the sheriff approaches Atticus, the liberal lawyer, to help him kill it because he’s not sure he can shoot the dog with a rifle.

Tension is built up as Calpurnia, the black housemaid, hurries door to door warning people not to come out. Atticus tenses up as the dog approaches, carefully aims, and Bang!

I was twelve when I read this and thought, huh? With a mad dog all you do is whip out your revolver, go bang! And it’s all over. Why would a sheriff go to someone to help him kill a dog? I thought the entire scene was designed to show Atticus not just as a liberal, but one with a gun, so we’ll know he’s a tough liberal if need be.

The Moonflower Vine has no scenes like these. It is a felt, organic work.

Much like when Leonie feels ignored because of Mathy’s death. She wants to push over her sister’s tombstone and decides to escape to Kansas City to live it up, but her rebellion becomes comic. Leonie’s adventure in the big city winds up in Ed’s apartment. He finds Leonie’s attempt at decadent city life humorous but also sees an affection for her that will lead to their marriage. Leonie had hoped to have a wild time and sin but finds out most people were sinning and no one cared. “Hell had shifted its location; it was farther away than most people used to think.”

Matthew, who blamed Ed for Mathy’s death, becomes reconciled to his union with Leonie as he holds a piece of sandstone and sees in it a use from eons ago to today that reflects the continuation of life, as Ed and Leonie must be together. He hears a returned Leonie play her accordion, “A distressing sound, like someone trying to laugh through tears.”

The novel’s quiet, strong beauty of relationships and kinship to the land remind me of Daniel Woodrell’s book Woe to Live On, later filmed as Ride with the Devil or his Winter’s Bone, writing of Missourians coming to terms with themselves in peace, war, and inner turmoil. Both authors capture a tragic, unattainable nature to life, as Callie, in her old age, observes:

Maybe that was the way it went, that all your life you heard the singing and never got any closer. There were things you wanted all your life, and after a while and all of a sudden, you weren’t any closer than you were and there was no time left.

The Moonflower Vine is a beautiful evocation of an independent America and the struggles of people coming to terms with themselves and their land. Read and enjoy.

» Toward a New Era of Nation-States, Part VIII: How Europe Lost its Commanding Position in the World