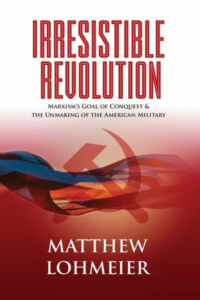 Lieutenant Colonel Matthew Lohmeier of the US Space Force has made the news. He self-published an exposé on the problems of critical race theory in the military and then was abruptly fired as a commander.

In a way that is highly unusual for the unintellectual US military, Lohmeier seriously and intelligently examines the ideas of Marxism. He describes its origins in the Enlightenment through the bloodbath of the French Revolution, to the Communism of Lenin and the Soviet Union, to its most recent form: critical race theory (CRT).

Lohmeier argues that CRT has the same flaws of Marxism that lead to death and destruction in the long term. In the short term, CRT is sapping the effectiveness of the US military. Good people are not reenlisting, and good officers are getting out prior to retirement. CRT training events — often led by sub-Saharans — are divisive sessions. “If you are a servicemember,” writes Lohmeier, “have you seen these trainings improve your unit’s cohesiveness? Or has it made groups of people increasingly suspicious of one another based on their racial identities?” (p. 23)

Another problem with CRT is that its philosophical center holds that there is no objective truth. Critical Race Theory can “. . .offer only criticism of and accusations about others.” (p. 92)

Lohmeier goes on to say that

. . .there is a bitter karma in store for those who wittingly adopt such a foolish notion [as no objective truth]. Sooner or later they lose touch with objective reality; the ideological paradigm they adopt infects their capacity for right reason, and the light of their conscience fades — everything bends toward the relative and away from the objective. Soon, there is nothing left but radical relativism. (p. 93)

Lohmeier argues that the military should turn away from CRT and embrace the Trump administration’s efforts at national unity with the 1776 Commission. The 1776 Commission is a flawed, but temporarily workable civic nationalist effort to unite racial groups. One can read a critique of the commission here.

Lohmeier’s exposé is a quick read, and it effectively points out the problem of CRT while offering an effective way to return to the appearance of inter-racial unity. However, Lohmeier was relieved of command, his suggestions were not taken seriously by the military establishment, and non-whites in the military continue to endorse violence on social media. (Lohmeier gives a number of examples of uniformed sub-Saharans on active duty encouraging racial violence.) It is thus clear that not much will change.

The Problems at the Pentagon

Although the book is focused on how CRT is a philosophy that is negatively influencing American military operations, it does provide an opportunity to discuss some of the wider problems within the service.

The book exposes the limitations of the military mind as much as it exposes the flawed presuppositions of CRT. Senior leaders in the Defense Department are unable to envision what a successful end-point to CRT would entail. I’ll explain: the end-point is bloodshed. CRT is the dehumanizing language that precedes genocide. There is no possibility for reconciliation if “silence equals violence.” It is shocking beyond measure that senior Pentagon leaders fail to grasp this concept.

Then there is the eternal African Question. Sub-Saharan pathology is the crack in the foundation of all American military operations. The problem is multifaceted, but can be categorized. First, sub-Saharans have a lower IQ than whites, so there are constant issues with basic competence. Second, African crime is off the charts in terms of frequency and severity. In that regard, Negroes don’t get justice in America, they get mercy. Finally, the sub-Saharan intellectual class, such that it is, is driven by envy and resentment. Whites are an accomplished race, Africans aren’t. Military leaders that can paper over this problem get promoted; military leaders that point it out are not.

The idea that CRT denies the idea of a basic truth is tied into the fact that believers in “civil rights” always misread data. Senior leaders in the military really think that they are holding off an avalanche of “white rage” while there have been many episodes of black-on-white fragging, Muslim terrorist mass shootings, and ordinary sub-Saharan crimes.

Next, the Pentagon has moved beyond the control of elected civilian leadership. Probably the first time this occurred was when there was a revolt against gays in the military in the 1990s. There were plenty of good reasons to avoid gays in the military during the AIDS crisis, but the question was one for politicians to answer, not the Joint Chiefs of Staff. In his memoir, President Obama described a sharp conversation with his generals over their attempts to paint him into a corner over policy in Afghanistan. The military was mutinous under President Trump, even to the point of lying about the number of troops in Syria. Lieutenant Colonel Alex Vindman (Jewish) was also disloyal to the point of endorsing the interests of a foreign country over the interests of the United States.

American white conservatives who worship the military are misplacing their devotion. The Pentagon has a rotten center and a rotten senior leadership. Critical race theory is part of this trend. The Pentagon’s top brass fear their black troops and hate their white troops. Meanwhile, wars launched at the urging of foreign pressure groups like the Israeli lobby go on and on. I can offer no solution for this situation for the time being, but pointing out the problems is a step in the right direction.

« Blast from the Past