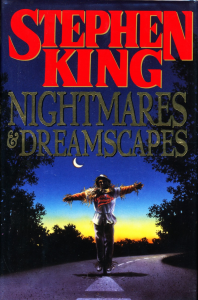 The New England schlockmeister Stephen King is a bad but interesting writer. Success is an interesting phenomenon, after all, and King is one of the most successful writers who have ever lived. Born in 1947 in Portland, Maine, he has sold millions of books in dozens of languages and won even wider exposure through film adaptations of novels like Carrie (1974) and The Shining (1977). His American nightmares have been hugely popular both at home and abroad.

But what are those nightmares? For Stephen King, the answer often seems to be this: America’s nightmares are the bad behavior of its whites and of its white men in particular. King’s life has coincided with the rise and triumph of anti-white Leftism in America. Could he have been successful if he had opposed Leftism and celebrated America’s whites rather than denigrating them? More narrowly, could he have been successful without pandering to America’s hostile Jewish elite?

Give Grease a Chance

There are many examples of this pandering in his short-story collection Nightmares and Dreamscapes (1993), but the book is old enough to contain things that would now be regarded as blasphemous by enlightened opinion. For example, there’s a highly unpleasant homosexual villain in “Sneakers,” which is about a ghost haunting a lavatory, and an even more unpleasant Turkish villain in “Popsy,” which is about a white child abductor:

Sheridan paused for a moment, feeling the familiar soft wave of self-disgust. . . though every time he took a child, the feeling grew a little less. The first time he hadn’t been able to sleep for a week. He kept thinking about that big greasy Turk who called himself Mr Wizard, kept wondering what he did with the children.

“They go on a boat-ride, Mr Sheridan,” the Turk told him, only it came out as Day goo on a bot-rahd, Messtair Shurdunn. The Turk smiled. And if you know what’s good for you, you won’t ask any more about it, that smile said, and it said it loud and clear, without an accent.

That is a good example of the updated clichés King often deals in. In the 1930s, a popular writer would very likely have represented Mr. Wizard as Jewish, not Turkish. [1]

By the 1990s, that was no longer possible, but you can still see an anti-Semitic stereotype lurking beneath King’s description. He may not have been conscious of this himself, and elsewhere he is anxious to reinforce the idea that only bad people — white people — are anti-Semitic. In the story “Dedication,” two saintly and oppressed black women discuss a famous white writer who has unknowingly fathered a child by one of them. With a “bitter derisive smile on her lips,” the black mother describes working as a cleaner at a hotel the writer often uses. She has heard how he “hated the blacks and the Jews” and is “full of ignorance and high-toned filth.”

The story also has a wise black witch-woman with a “smile like sunshine.” King is trying to pander to Leftist ideas about the saintliness and numinosity of black women, but many Leftists would now object to a white male daring to create black female characters. And most Leftists would strongly condemn other parts of the story: the mother calls her black husband a “worthless piece of shit” and she falls pregnant to the white writer by (believe it or not) eating the dried semen that he regularly leaves on the sheets of his hotel bed. He’s a wanker in more senses than one.

Another imperfect white male turns up in “You Know They Got a Hell of a Band,” where a white couple called Clark and Mary are trapped in a demonic town by Clark’s stubbornness and machismo. The town is called Rock’n’Roll Heaven and its initial “resemblance to the paintings of Norman Rockwell and the small-town illustrations of Currier & Ives was, to Mary, at least, inescapable.” But if the town looks like a Whitopia, you can be sure that evil lurks beneath the façade. Sure enough, it turns out that Rock’n’Roll Heaven is actually Rock’n’Roll Hell. The town is controlled by rock-star revenants, including a malevolent Buddy Holly, whose eyes weep blood, and a sadistic Elvis Presley, whose “pale hands dangl[e] like dead spiders.”

In the Teeth of the Facts

As you can see from his treatment of Holly and Elvis, there are undoubtedly irony and humor in King’s writing, but those qualities don’t contradict his anti-white agenda. Indeed, they often reinforce it. Sadistic humor is certainly used to attack whites in “Chattery Teeth,” which has the theme of violent crime and the harm it does to ordinary hardworking white Americans. In the real America, violent criminals who harm whites are typically black, even though blacks are far outnumbered by whites. But in “Chattery Teeth,” the criminal is a “pallid young man” with “long blonde hair,” “gray-green eyes” and the “face of an intelligent lab-rat.”

He’s a hitchhiker kindly given a lift in a Nevada sandstorm by the story’s protagonist, a salesman called Bill Hogan. But Hogan has misgivings, having once been robbed at gunpoint by a white female hitchhiker. His misgivings are entirely justified. The blond kid first gives him a false name, Bryan Adams, then pulls a knife on him and orders him to stop, intending to steal his customized Dodge camper-van. Hogan refuses to obey, angered by the kid’s ingratitude and by memories of his encounter with the female hitch-hiker. Instead, he does the opposite of what the kid wants: he drives faster and threatens to crash the van, because the kid isn’t wearing a seatbelt.

Shortly afterward, the van does indeed crash and Hogan is trapped in his seat by his jammed seatbelt. Unfortunately, the kid has been only slightly injured and is about to stab Hogan to death when a deus ex machina intervenes. Except it’s more machina than deus, being the jumbo-sized Chattery Teeth of the story’s title. Hogan bought them for his young son at the roadside shop where he met the feral blond kid. The kid picks them up to mock Hogan, not realizing that they have supernatural powers:

One of the orange feet took a sudden step forward on the grimy palm of the kid’s hand. The jaws opened at the same time, and before Hogan was fully aware of what was happening, the Chattery Teeth had closed on the kid’s nose.

This time Bryan Adams’s scream was real — a thing of agony and ultimate surprise. He flailed at the teeth with his right hand, trying to bat them away, but they were locked on his nose as tightly as Hogan’s seatbelt was locked around his middle. Blood and filaments of torn gristle burst out between the canines in red strings. The kid jackknifed backward and for a moment Hogan could see only his flailing body, lashing elbows, and kicking feet.

The story seems to be in part a wish-fulfillment fantasy written for ordinary Americans who have been the victims of violent crime. After all, when Bernhard Goetz shot and wounded four would-be black muggers on the New York subway in 1984, he was acquitted of “attempted murder and first-degree assault charges” by a “mainly white Manhattan jury,” who obviously sympathized with what he’d done. [2] In Goetz’s real New York, the justly punished criminals were black; in King’s fictional Nevada, the justly punished criminal is not merely white but blond and green-eyed with it.

Nor do the Chattery Teeth confine themselves to biting the blond kid’s nose. King obviously wrote the following scene with the cinema in mind and you can imagine the hilarity it would provoke on the big screen. Leftists in 2021 would object to the reference to an “Al Jolson imitator,” but they would otherwise be delighted to laugh at the suffering of a white:

The kid reached for the teeth again and this time they ran forward, under his snatching hand, between his spread legs, and there was a meaty chump! sound as they closed on the bulge of faded blue denim just below the place where the zipper of the kid’s jeans ended.

Bryan Adams’s eyes flew wide open. So did his mouth. His hands rose to the level of his shoulders, springing wide open, and for a moment he looked like some strange Al Jolson imitator preparing to sing “Mammy.” The switchknife flew over his shoulder to the back of the van.

As the cloth of the kid’s jeans began to rip — and that was not all that was ripping, by the sound — Bill Hogan passed out.

It’s easy to understand the symbolism of an attack on a criminal’s genitals. A cinema audience would laugh because the kid is suffering pain and humiliation, but they would also recognize that he is being castrated. Stopping criminals having children makes good eugenic sense, but in real rather than fictional America the criminals in question would be overwhelmingly black, not white.

In other words, King’s story takes a genuine problem and offers a genuine solution, but deliberately misidentifies the racial group causing the problem and requiring the solution. Was King protesting too much when he set the story in Nevada and made his criminal a “pallid,” green-eyed blond? Perhaps, but I don’t think the story was a coded piece of race realism, designed to be understood by inversion. If ethnophobia is hatred of a particular ethnic group, then King is clearly an auto-ethnophobe — he expresses hostility to his own ethnic group in book after book and story after story.

Rewarded by the Hostile Elite

His novel The Green Mile (1996) is another good example of his auto-ethnophobia. It contains an almost parodic Numinous Negro, a child-like gentle giant with supernatural powers who is wrongly executed for murdering two white girls. It also contains an evil Southern white, who is both cruel and sexually perverted. Like The Shining and its Numinous Negro, The Green Mile has been made into a film by Hollywood.

If King had drawn a realistic picture of America in his books, celebrating white achievements and identifying blacks as the source of many of America’s problems, it’s certain that he would not have become a best-seller or seen any of his books made into films. Like so many successful writers in the modern West, King has genuflected to anti-white Leftism throughout his career. But what shall it profit a man, if he shall gain the whole world, and lose his own soul?

[1] As the Jewish anti-racist Liz Fekete puts it: “Jews [were] associated with paedophilia in the 1930s.” The late Jeffrey Epstein is good evidence that the association was based more on reality than on gentile malice.

[2] Interestingly, Goetz is described by Wikipedia as having a Lutheran father and Jewish mother. It makes no difference to me: I merely wish that more people with Jewish mothers had the same attitude to black criminality, rather than finding excuses for it.