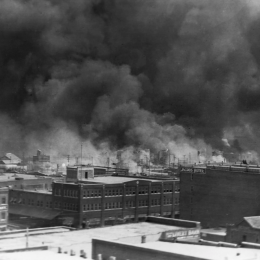 This week marks the 100th anniversary of the Tulsa race riot. It’s no longer called a “riot,” but a massacre or pogrom in mainstream discourse. America’s history is filled with race riots; we just experienced a rash of them last year. However, the only one we’re supposed to remember is Tulsa. The Tulsa riot now forms a core part of lib American mythology. We apparently owe blacks so much after we burned down “Black Wall Street” and murdered hundreds of innocent non-whites.

Nearly every media account you will read on Tulsa will mention “up to 300 people” were killed, even though the 300 bodies have never been accounted for. The opening scene to the Watchmen TV series represents the Tulsa “massacre” in the public consciousness. We see rampaging whites brutally murder unarmed blacks and destroy their stores. We see airplanes flying overhead, dropping bombs, and gunning down innocents. We see some whites set blacks on fire or execute helpless women. The point is driven home: whites committed an unspeakable evil in 1921 Oklahoma.

Even though the show is a superhero story, critics praised the scene as an accurate depiction of the Tulsa riot. Outlets even warned viewers that this super accurate depiction may traumatize them! The show’s black protagonist, Angela Abar, is a descendant of Tulsa survivors and lives off reparations the government doled out to victims’ descendants. The massacre also justifies her brutal crusade against the show’s white supremacist villains. The opening scene is intended to make viewers cheer as the “heroes” torture and butcher whites.

That about sums up why Tulsa is so important to system propaganda. It justifies reparations and oppression of whites.

But like all system myths, the Tulsa race riot relies on plenty of exaggerations and lies. The common narrative, as stated before, claims up to 300 innocent blacks were killed just because they had a very successful neighborhood that deserved the name “Black Wall Street.” The impetus for the riot — a white woman claiming she was assaulted — was completely bogus, and blacks did nothing to incite violence. It was not a riot or a street battle, but a massacre. The whites even used planes (just like the Nazis!) to do their evil deeds.

But much of this is not true.

Here’s the real story. A 17-year-old white girl, Sarah Page, screamed as she ran out of an elevator at the Drexel Building on May 30th, 2021. It’s not quite clear what happened in the elevator. What is true is that she fled from the black passenger, Dick Rowland. Modern accounts try to claim the black elevator passenger must’ve tripped over the girl in the elevator (how does one trip in an elevator you’re already standing in?) and this is what startled the girl. Others even claim the two were lovers, despite no evidence to assert this. Whatever happened, the most likely scenario is that the black man tried to assault the girl and she ran away. White newspapers claimed her clothes were torn off and she was hurt by the assailant. It’s not clear if that happened. But the current consensus cannot countenance the idea that blacks would ever do something bad, so we’re told this assault never occurred and the Rowland simply tripped.

Whites became outraged over the story. Rowland was arrested by police and a white mob formed to go to the jail on May 31. Over 100 armed blacks, many of them World War I veterans, met the whites at the jail. The blacks fired on the whites first, and a fight broke out in the black neighborhood of Greenwood — the world-famous Black Wall Street. More whites showed up and defeated the blacks. Much of Greenwood was devastated by the riot.

Even though the white mob allegedly killed 300 people, Dick Rowland managed to survive completely unharmed. Charges were dropped against him that September and he is believed to have left town. So, to restate facts, the very target of the worst racist mob in human history, a mob that destroyed a city and killed hundreds, was completely unaffected. And when police let him go, Tulsa’s murderous whites let him go in peace. Something seems off here.

Details are murky over the details of the riot, but blacks have made sure to insert their own “facts.” Eyewitnesses claim they saw planes bomb Greenwood. A 2001 Oklahoma commission, plus several historians, found no evidence that any house or building was bombed by an airplane. But that doesn’t matter. The official history, as represented by Watchmen, adds bomber planes — even though this makes the myth obviously ridiculous.

There’s also the matter of the death toll. The authorities counted 36 dead in 1921; 24 blacks and 12 whites. A 2001 state commission found 39 people that could possibly be claimed as riot fatalities, making it 26 blacks and 13 whites. It’s hard to claim the violence was a “race massacre” when the supposedly non-violent innocents were responsible for a third of the deaths. Yet, blacks and official historians claim far more died than the official numbers. That’s led to a number of excavations to find the mass graves of the hundreds of nameless corpses. So far, the excavations have found nothing. Last year, media outlets claimed researchers found a mass grave in a black cemetery. But they only found 12 coffins and it’s unclear when those coffins were buried. If hundreds died, shouldn’t it be easy to find their final resting place? And wouldn’t there be some kinds of records for all these people who suddenly vanished in the summer of 1921? Why just records for 39? What happened to the other 261 alleged victims?

The other great myth is that Greenwood was somehow the engine of black prosperity. If it weren’t for evil whites, blacks would’ve made it to the middle class thanks to this bustling financial district. Even though Greenwood was a relatively nice community, it was not another Wall Street. A recent interactive New York Times story allowed readers to explore what we “lost” on that day. Readers will see that Greenwood had a barbershop, a doughnut shop, and other similar businesses. It did not have a stock market exchange or any kind of driver of capital. It was merely a nice little neighborhood. The estimated cost of claimed damages was $27 million in modern currency. The greatest estimate for possible damages comes out to $200 million. The estimated damage caused by rioters in Minnesota last year stands over $300 million — and that was mostly peaceful! Many nice little neighborhoods were destroyed by race riots from the 60s onwards. But the destroyers form America’s national religion, so we’re not supposed to remember them. We’re only supposed to remember the riots where they were the “innocent” victims.

In conclusion, a street battle between whites and blacks over an assaulted white girl ended up with the blacks losing. If the whites lost, the Tulsa riot would be completely memory-holed or turned into a glorious event in American history. We’re only supposed to feel bad over these battles if the whites ended up the victor. It’s the same story with the Indian wars; Indian atrocities are forgotten or celebrated while white victories are an everlasting shame. Our country has witnessed many racial conflicts. Some of them were despicable and some of them were brutal. But without whites coming out on top, we wouldn’t have an America. Mankind’s tale is filled with racial warfare. Most victors write the history to glorify themselves. See the Old Testament for several examples.

But white Americans are an exception. They’re told to see their triumphs as shameful and requiring serious contrition. We’re made to tear down our heroes and turn alleged offenses into national days of mourning. Based on current trends, you would think whites lost these battles. What kind of victor expresses sorrow for winning in a war for survival? That’s just the twisted state of affairs we live under.

Seeing the lies and exaggerations spread by the Tulsa myth makes one wonder how they’ll portray such modern atrocities as Charlottesville and January 6 in the future. Maybe we’ll be told the Nazis murdered hundreds of people in Charlottesville and shot down a police helicopter with a Russian-supplied surface-to-air missile. Maybe we’ll be taught the January 6 protesters were dragging POC congresswomen before a heroic black cop gunned down their leader, Ashli Babbitt. These may sound ridiculous, but no more ridiculous than planes firebombing Tulsa in 1921.

The one upside is that blacks can’t even make sure Tulsa stays clear of dirt on its anniversary. The city’s official centennial celebration had to be canceled after the last three alleged survivors (who are all well over 100 yet somehow can travel and have a great memory of that day) refused to attend because organizers wouldn’t pay them a million dollars each. Maybe the next set of survivors they miraculously find will attend the anniversary next year for a much lower rate. It’s grifter behavior typical of all black race hustlers, from Jesse Jackson down to Black Lives Matter. Even those at death’s door want their payday.

Every regime needs its myths to support its ideology. Anti-white racism is our regime’s ideology and it requires events like Tulsa to fortify its claims. Tulsa also has the added bonus of making Reddit liberals feel unique in that they get to learn this forbidden knowledge. “I was never taught this in high school!” is a common refrain you will hear. They can now show off their secret knowledge to their friends at trivia night. But that refrain won’t be true much longer. It’s guaranteed to be one of the few events taught to American kids, and they’ll learn about it just after slavery and the Holocaust. And they will learn it killed 300 blacks and destroyed the most financially successful neighborhood in America.

The truth won’t be allowed in school.