The Importance of Survival Skills 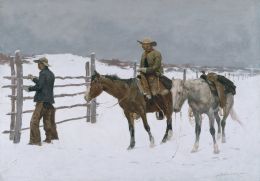 Frederic Remington, The Fall of the Cowboy, 1895.

Dissidents face a choice: Either extricate themselves from the system through lifestyle design, self-sufficiency, and independence, or suffer whatever consequences will be coming to them in the increasingly urban, non-white, anti-male society of the future.

By the time the Covid restrictions hit, I was already living alone on a boat. I had no debt, a lot of money in savings, and a decent amount of wilderness skills, so I could fish for my own food. If I so desired, I could take off to some remote island for a couple of years to wait for the nonsense to wear off. If Covid had hit a decade prior, before I had achieved these plans, I would be an urban prisoner who would be at the mercy of the Covid central planners and desperate to hold onto my job.

The timing of things worked out for me, but they very easily might not have. As the saying goes, “Fortune favors the prepared mind.” We can’t see all the things that are going to happen to us in life. Some things will be unexpected, such as a car crash or cancer diagnosis. Some things will come with little warning, such as pandemics and natural disasters. Some things should be predictable by a wise mind, such as the housing, financial, and education bubble collapses and that the anti-white atmosphere will worsen in intensity. However you look at it, preparedness is going to benefit you in some way. Even if no crisis were to occur in our lives, which is unlikely, preparedness helps you live an easier life.

So what do I mean by “preparedness”? I use the term to separate myself a little bit from the term “survivalist,” as this has been sensationalized by irresponsible shows like Doomsday Preppers and Man vs. Wild. I also use this term to separate what are sensible skills that are applicable to everyday life from wilderness skills like firemaking and edible plants.

In general usage, being prepared is about being ready for something. In lifestyle design usage, being prepared is about structuring your life to remove as many restricting factors as you can — anchors around your neck that stop you from reacting to life’s many surprises, and reliance on external systems that, when those systems stop working, leave you vulnerable and exposed. Think of it in terms of poor ballast in a sailboat. As the wind changes, you cannot effectively move to a new tack to deal with the new direction as the ballast is stopping you from effectively making the move. Here are some of the more important principles that lead to preparedness.

Think. Visualize. Act: Examine every system in your life and think about whether you need it, how you will cope without it, and what you can do to mitigate its failure. Take the example of a blackout: do you have charged flashlights stowed nearby? Do you have at least one month’s supply of canned food? Have you frozen bottled water? Visualize the process of a blackout and identify areas of weakness in your current setup and fix those weaknesses. Perform an actual blackout test and see how well you hold up.

Remove yourself from bad situations: I recommend avoiding cities as much as possible. If you have to live in a city, then avoid the bad areas. If you see a bad situation coming, such as a congregation of dangerous people in a park, then get out as soon as possible. Always be alert to the situation around you at all times. If you’re anchored in a bad bay and the weather’s turning for the worse, move to a better anchorage and prepare accordingly. This thinking can also apply to bad relationships: don’t fester if it’s going south, get out!

Practice minimalism: Reduce material clutter in your life. Brutally go through all your possessions and ask if they are necessary. Reduce unnecessary proliferation of gear types in order to buy a minimal set of good-quality items: for example, you don’t need twenty fishing rods, but a good quality rod of each fishing type (fly, spinning, jigging, etc) is more maintainable. Minimalism not only reduces clutter that weighs you down in life, but it instills an attitude that stops you from buying crap you don’t need whilst getting vital items of a greater quality.

Practice sustainability: To sustain is to maintain and prolong. How sustainable are your systems? Take coffee as an example. An electronic coffeemaker is reliant on mains power. If you use a French press, then it’ll work for you in a blackout, on a road trip, or a camping trip. Is the French press glass? I broke a huge number of glass presses before I thought to buy a steel one that will last me for decades. By reverting to a system that relies on simple mechanical operation, you get a much more sustainable system. This example shows to what level this kind of thinking can go to before you start considering a completely sustainable mains-separated solar/wind-powered house or boat.

Practice self-reliance from people and systems: A helping hand is a controlling hand. Keep yourself as the center of power in your life. Learn what you do and do not control and don’t stake your mental well-being on other people or systems that you cannot control. Learn to be alone so you don’t need the crutch of a relationship. It’s fine to vote and hope for the best — but your life shouldn’t be destroyed by the results of an election or the betrayal of a politician. Be skeptical of the motivations of others and trust only with good reason. People stay with toxic people mainly because of weakness. This rule also covers owning over renting and. . .

Eradicate debt: This is so important that it’s a separate rule. One of the worst anchors around your neck in life is debt. Debt is slavery. It is probably the biggest external factor, after governmental regulation, that controls your life. When you meet someone who is stuck in a bad situation, it’s normally due to being limited in life and work from excessive debt. They’re stuck working endlessly until a very late age, normally with different types of debt such as child support, which open the door to extra governmental control. Work on eradicating any existing debt you have as soon as possible, reducing any unnecessary expenditure until you do so, then try to not get into any future debt unless absolutely necessary.

Be physically fit: Fitness acts as a general boost to everything you do in life. At the very least, you shouldn’t be unfit. Practicing the other attitudes in this list will help you if you have problems dropping the weight minimalism in reducing unnecessary and expensive foods will help: learn to do without and be satisfied with less. Drink water instead of pop. Use sweetener in your coffee if you can’t do without.

On jobs and income sources: This is another one that’s covered in general elsewhere, but is important enough for a mention. What’s important here is not putting all your eggs in one basket. Working for companies is going to be more difficult in the future as the government will force them to force you to vaccinate against your will. The bigger the company, the more anti-white and anti-male propaganda will be thrust down your throat. If you’re legitimately useful and talented (i.e., you work as the programmer who does the actual work among a throng of HR spinsters) then you’ll be able to retain some power and tell the company “no.” Make no mistake, though — adherence to the dominant culture will often take precedence over a vital talent and you may be let off anyway. All other companies will use it as a mark against you if you got dismissed for not taking diversity training. It’s better to be an entrepreneur than an employee as that takes the power and makes it your own. Still, diversify as much as you can — maybe write on the side, or work on a YouTube channel, etc. Ultimately, minimalism and debt avoidance will go a long way to lessening your reliance on working.

Learn wilderness survival skills: To my mind, survival skills are less about making fires and lean-to shelters, but are more about effecting a sea change in the minds of the people who learn them. It’s another, more extreme form of the rule about taking power into oneself and becoming independent. You also learn vital information about how fire works, how to purify water, and how to retain heat inside the body via proper clothing. These skills apply outside of wilderness situations all the time. I think it’s nigh-on impossible for a person who’s learnt these skills to be of poor and weak character like you see so obviously in the urban soy people that these times seem to produce in such abundance.

Upskill: Learning new skills, especially practical ones, is rarely time wasted. Learning how to sew saves one the cost of unnecessarily buying new clothes. Learning rudimentary carpentry can allow one to modify one’s own home to your desires.

» An Interview with Béla Incze: The Man Who Destroyed a BLM Statue