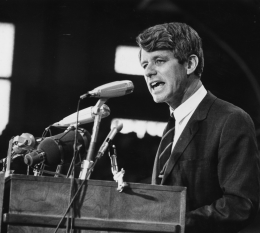 It’s a take as old as time: “our leaders divide us by race to stay in power.”

The take resonates with a lot of Americans. We’re instructed to believe we would all get along if it weren’t for meddling politicians and conniving journalists. Black, white, red, yellow — what’s the real difference to the average Joe? On his own, he’s like Rousseau’s noble savage, completely colorblind and ready to grab a beer with anyone regardless of race. But he only hates or fears others due to pernicious ideas put in his innocent little head by powerful people. Free of this influence, he would accomplish Martin Luther King’s one line that all children are taught to remember.

It’s a nice fantasy. We all know it’s complete bullshit.

Racial differences and tension are natural. Those in power seek to obscure them rather than create or inflame them. The racial strife in our country is the inevitable result of making every color, creed, and kind try to live with one another.

But this delusion carries on. It’s now even a conservative take. NBA commentator Charles Barkley became an instant hero to conservatives when he made this point in a recent on-air rant.

His comments were prompted by a clip of Robert F. Kennedy announcing Martin Luther King’s death in 1968. In the clip, RFK urged his mostly black audience to not hate white people for their crimes against their race. He called for a new understanding between the races that brought them together and avoided racial conflict. Blacks did not heed RFK’s call as they burnt and pillaged several American cities following MLK’s assassination.

But Barkley still finds this a relevant message today. Even though in the RFK case, it’s the politician seeking racial harmony against the people’s wishes. . . which undermines Barkley’s point.

Conservatives were swept away by the Basketball Hall of Famer’s comments. Here was a proud black man calling out the racist Democrats and speaking truth to power. According to conservatives and Barkley, we’re all just human and it’s time to see us as mere individuals — not members of any collective besides the red, white and blue.

It’s no surprise Barkley was the herald of this message. The TV commentator has developed a reputation for occasionally wandering off the plantation. Barkley was once a proud black Republican, but has since stated he’s an independent. He frequently criticizes other blacks for criminality, riots, and refusing to adopt white standards. He’s needled Black Lives Matter for trivializing issues and mocked hate hoaxers such as Jussie Smollett. He even defended the police in the Breonna Taylor shooting.

He may have a personal reason for people to not see race. Barkley is married to a white woman and has a mixed-race daughter. White and black aren’t divided in his house.

Barkley’s ascent to conservative herodom is notable considering his reputation as a player. He was a loudmouth trash talker who famously declared “I am not a role model” for a Nike ad. He was the antithesis to the squeaky clean image of Michael Jordan. Now he’s one of the few sports commentators to not traffic in Left-wing propaganda.

While it is refreshing for a sports commentator — a black commentator especially — to veer from unremitting anti-white racism, the counter vision is plain silly. Politicians, corporations, and other powerful forces would prefer if race didn’t exist and everyone got along. The racial appeals of politicians are driven by the grassroots, not the other way around.

Let’s go back to RFK’s time period. In that age, all politicians with the exception of the South believed all the races could get along with one another. They supported the Civil Rights Act, the Fair Housing Act, and the Immigration Act on this premise. The lone exception came from the South, but these politicians were not directing the region to oppose multiracialism. Rather, they were responding to their own constituents. Southern leaders were usually less bothered by civil rights than their own voters. Southern Democrats wanted to let the 1957 Civil Rights Act pass without a fight because party leaders told them to do so. They faced an avalanche of constituent correspondence to fight tooth and nail against it. Only one Southern leader heeded the call of his voters: South Carolina Senator Strom Thurmond.

By the logic of the divide and conquer take, the Southern leaders would’ve made their voters care about this issue. In reality, it was the reverse.

We see this now in our own time. The BLM riots weren’t spurred on by politicians, even though politicians and journalists helped fan the flames. Critical race theory training is driven by activists, not politicians. Republican voters do not oppose mass immigration at the behest of GOP lawmakers. It’s because they see the effects of mass immigration in their own communities. Most Republican legislators would rather bring in millions of cheap foreign labor to replace their constituents.

You could say that it’s not politicians but the media behind the latest racial divisions. There is a case to be made there with liberal whites becoming virulently anti-white in recent years. But that doesn’t explain the “reactionary” attitudes of Republican voters, whose views diverge strongly from the media and their representatives.

If racial division is an artificial construct imposed by the elite, then one would expect multiracial communities to flourish. Wrong. Diverse communities are marked by low trust, low engagement, high crime, and poor quality of life. It’s not the politicians telling the people to not get along. They’re not getting along on their own.

Barkley’s vision appeals to bourgeois Americans who can all recall one black, Hispanic, or Asian friend. It gives them a gooey feeling that race doesn’t matter and we’ll eventually get over this turmoil. It’s an awfully appealing delusion.

But while Barkley’s fans may not be interested in race, race is interested in them. Politicians, journalists, entertainers, and other public figures are merely sponges of society. They’re soaking in the racial mess of America and excreting it back out. The more diverse America becomes, the more it resembles Barkley’s nightmare.

The only solution to our racial mess is separation. But that’s not an idea you will hear during an NBA telecast, nor will it get you cheers from Conservative Inc. And it’s certainly not an idea that any politician will entertain. It’s only spoken of in the dark corners of the internet that politicians want to censor.