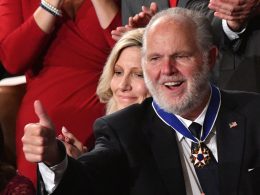 Rush Limbaugh passed away from lung cancer Wednesday at the age of 70. No one did more to shape modern conservatism than the talk radio giant. Republican politicians bowed before him and sought his favor. Rush had the power to shape the opinions of millions, and one rant from him could scuttle a presidential candidacy or legislation. He’s the rare figure to earn glowing remembrances from both George W. Bush and Donald Trump. Rush may have not invented conservative talk radio, but nobody defined it more than him.

Every conservative outlet and figure is reminiscing on Rush and his influence. The Dissident Right should follow suit. The radio host was certainly not one of us — here’s how he outlined his ideology in his famous CPAC 2009 speech:

We love people. [Applause] When we look out over the United States of America, when we are anywhere, when we see a group of people, such as this or anywhere, we see Americans. We see human beings. We don’t see groups. We don’t see victims. We don’t see people we want to exploit. What we see — what we see is potential. We do not look out across the country and see the average American, the person that makes this country work — we do not see that person with contempt. We don’t think that person doesn’t have what it takes. We believe that person can be the best he or she wants to be if certain things are just removed from their path like onerous taxes, regulations and too much government. [Applause]

We want every American to be the best he or she chooses to be. We recognize that we are all individuals. We love and revere our founding documents, the Constitution and the Declaration of Independence. [Applause] We believe that the preamble to the Constitution contains an inarguable truth: that we are all endowed by our Creator with certain inalienable rights, among them Life. [Applause] Liberty, Freedom. [Applause] And the pursuit of Happiness.

This is very bluepilled. (Breitbart and several other conservatives gushed over the speech on the day of Rush’s death, indicating they share its message.) Any time Rush would define his philosophy, it would be along similar libertarian lines. That may be reason to dismiss him as nothing more than a cuck, but he was more than his cringe. In his final years, he pushed conservatives to embrace nationalism, opposed mass immigration, criticized foreign interventionism and unrestricted free trade, and even entertained the idea of secession. Throughout his career, he savaged feminism and minority identity politics in terms National Review would squirm at. While no Pat Buchanan, he was superior to nearly every conservative radio host and generally pushed his audience in a positive direction (at least in his later years). The only major radio host who ventured further than Rush was Michael Savage.

Some on our side don’t fondly remember Limbaugh. VDARE editor Peter Brimelow aptly noted that Limbaugh failed to address immigration in the 90s and seemed to embrace the issue too late. It is certainly true Rush could’ve done more in the 1990s to push for immigration restriction. His voice could’ve pressured Republicans into passing legislation at a time when even Bill Clinton wanted to reduce immigration. The radio host’s failure to do so was a serious mistake that shouldn’t be forgotten.

However, in recent years, he has helped push the GOP in a more positive direction on immigration. He led the fight against amnesty. This was particularly helpful in 2013, when many prominent conservative figures backed the sellout. He presaged Trump’s immigration pitch in 2016. Throughout the campaign, Rush credited immigration for Trump’s popularity and urged Republicans to take the issue seriously. He even attacked Trump when it appeared the then-candidate would endorse amnesty (Trump did not do so.) Limbaugh moved beyond typical Republican talking points about the “rule of law” and exclusive concerns about illegal immigration. His radio program frequently discussed how Democrats weaponize mass immigration to change America’s demographics and secure future election victories. As Brimelow noted, Limbaugh began to entertain secession in his final months due to America’s demographic predicament. These are not discussions Sean Hannity or Mark Levin would ever touch.

In 2016, he read Sam Francis’s “From Household To Nation” essay on the air and praised its author. The 1996 essay advised a hypothetical Republican candidate to abandon traditional conservatism and promise to restore the nation’s Middle American core. “[S]ooner or later, as the globalist elites seek to drag the country into conflicts and global commitments, preside over the economic pastoralization of the United States, manage the delegitimization of our own culture, and the dispossession of our people, and disregard or diminish our national interests and national sovereignty, a nationalist reaction is almost inevitable and will probably assume populist form when it arrives,” Francis wrote in that essay. Limbaugh read this to his 15 million listeners and said it described Trump. He was attacked by the SPLC for this grave offense.

Two areas where Rush deserves criticism are on trade and foreign policy. He was instrumental in convincing Republicans to back NAFTA in the early 90s. He touted the globalist trade alliance and debated Ross Perot on the matter. The Clinton White House praised him as one of the “distinguished Americans” who helped secure the nefarious deal’s passage. Limbaugh could’ve helped scuttle the job-destroying, nation-undermining deal. Instead, he chose to back it. To his credit, however, he later came to regret his support for NAFTA and complained it did nothing to stymie illegal immigration. (Its supporters claimed it would reduce Mexican migration to the US). He later came to oppose globalist trade deals and supported Trump’s attempts at trade protection.

Like nearly every conservative, Rush fully supported the Iraq War. He later came to regret that decision. But unlike most conservatives, he seemed to learn from this mistake. He opposed intervention in Libya when neoconservatives cheered it on. Many great conservatives unfortunately backed the Iraq War, including Tucker Carlson, Ann Coulter, and Michelle Malkin.

Rush’s career was animated by what critics would deride as “race-baiting.” He said that most mug shots of black criminals resemble Jesse Jackson and argued “the NFL all too often looks like a game between the Bloods and the Crips without any weapons.” He reputedly once said: “The NAACP should have riot rehearsal. They should get a liquor store and practice robberies.” He famously lost his job at ESPN in 2003 after correctly claiming sports media overrated black quarterbacks.

These don’t evince racial consciousness outside of normal boomer conservatism. But his early commentary was more willing to call out black malfeasance than most commentators today. This was likely a response to the high crime rates of the 80s and 90s, which made even suburban whites vaguely cognizant of the race problem. The early forerunners of conservative radio such as Bob Grant made their names through racial analysis of crime. This form of “black awareness” has subsided alongside lower crime rates. Limbaugh never discussed race in the daring manner of Grant (who recommended Jared Taylor on his program), but he didn’t necessarily ignore it. His discussion of criminality was not as brave as his commentary on mass immigration and he certainly didn’t promote white identity.

You can know a man a lot by his critics. Liberal publications shrieked in unison that Limbaugh made America and conservatism worse on his death day. They complained he was too racist, sexist, crude, bombastic, and even entertaining for them to respect. In their opinion, without Limbaugh, conservatives would’ve embraced everything liberal elites imposed on them. They would all be more like John McCain and just respectfully dissent on higher taxes.

This universal opinion is why the Dissident Right should respect Limbaugh. Millions of our people turned to him to escape from mainstream media programming. They intrinsically knew something was wrong with our country, as did Rush Limbaugh. He didn’t necessarily direct his listeners in the right direction, but his message was far better than CNN. Too many on our side believe that without mainstream figures like Rush, millions of Republicans would instantly become white nationalists. Middle America suddenly discovering William Luther Pierce and toppling the corrupt system absent Limbaugh is a fantasy that fails to understand the vast majority of people. Most people don’t have the time or wherewithal to search for us. We’re not on major radio stations or on cable news. Average Americans turn on whoever is on the radio or on TV to get their information. These people aren’t going to reject everything they hear or see if they only come in contact with liberal commentators. They’re more likely to embrace that message if that’s all they hear.

Limbaugh offered them an alternative. We can all agree it would be better if Jared Taylor had had his platform, but you have to live with what you have. For millions of Americans, Limbaugh was the first person to tell them that immigration threatened our country and demographics matter. He told them to not trust the mainstream media, which is a virtue in our age of hate hoaxes. Just think of how many people would think Trayvon Martin was an innocent boy if it weren’t for conservative media.

The fundamental problem with Rush is that he didn’t take people far enough and could only express his worldview in classical liberal terms. His America was not based on its people, but on its values. He saw people as mere individuals, not as members of groups or a greater collective. This runs counter to the mission of the Dissident Right.

Our present mess was caused by this pernicious individualist worldview — we must step over it.

But we must step over it with the people who adored Rush Limbaugh.