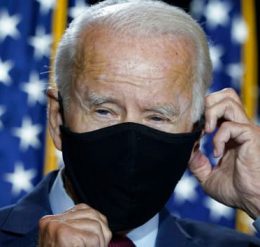 “There was but one thing remarkable in his appearance. Swathed about his forehead and hanging down over his face, so low as to be shaken by his breath, Mr. Hooper had on a black veil.”  — Hawthorne, “The Minister’s Black Veil” [1]

“O brave new world, that has such people in it!” – Shakespeare, The Tempest

The Holocough Hysteria finds us once more in witchcraft land. You might think America had put aside Puritanism, and that nothing could be less Puritan than the bourgeoisie’s pursuit of comfort and pleasure, yet the latter is merely the secularization of the former.

The Puritan sacrifices worldly comforts and bewitching pleasures for a promised (but apparently rather dreary) eternal life (“What profit a man to gain the whole world…”);[2] the bourgeois wants a long life NOW, with all the mod cons; Science is his secular God.

In both cases, unlike Aristotle, a good life is measured by its length and pleasures. The pursuit of pleasure and the pursuit of penitence are two sides of one coin; no surprise that both should typify America, and that one so easily flips into the other, no matter how “opposed” they seem to be.

As Howard Beale, the “mad prophet of the airwaves” told us:

I don’t have to tell you things are bad. Everybody knows things are bad. It’s a depression. Everybody’s out of work or scared of losing their job. The dollar buys a nickel’s worth, banks are going bust, shopkeepers keep a gun under the counter. Punks are running wild in the street and there’s nobody anywhere who seems to know what to do, and there’s no end to it. We know the air is unfit to breathe and our food is unfit to eat, and we sit watching our TVs while some local newscaster tells us that today we had fifteen homicides and sixty-three violent crimes, as if that’s the way it’s supposed to be. We know things are bad – worse than bad. They’re crazy. It’s like everything everywhere is going crazy, so we don’t go out anymore. We sit in the house, and slowly the world we are living in is getting smaller, and all we say is, ‘Please, at least leave us alone in our living rooms. Let me have my toaster and my TV and my steel-belted radials and I won’t say anything. Just leave us alone.’

We must remember that Beale is not just a prophet but a “mad prophet” (really, is there any other kind?) – mad, bad, and dangerous to know. Beale is hardly an expert on the Good Life – “I don’t have anything going for me. I haven’t got any kids. And I was married for thirty-three years of shrill, shrieking fraud.” What’s so bad about the family huddled around the TV, enjoying some toast and looking forward, perhaps, to a family vacation or Christmas gathering, on safe, reliable tires? Sure, there are problems outside, but does the man on the TV have an answer that also plays on our desire for bourgeois comfort, while actually stripping us of what little we have left? Is the cure, to coin a phrase, worse than the disease?[4]

Like the early (i.e. real) Christians, putting aside all to follow Christ, and waiting his Second Coming while sharing all in common; mediaeval peasants finding the Brotherhood of the Free Spirit amid the chaotic ruins of the Plague; or Puritans abandoning their homeland and setting sail for the New World, establishing a Common Wealth and a Shining City on a Hill (far from the “corruption” below), with the occasional Black Veil or Scarlet Letter a sadly necessary means for repentance or discipline; or Transcendentalists retreating to an intentional community or pond-side hut; or followers of some End Times prophet huddling in a rural compound awaiting the Rapture — all aspects of a normal life are renounced — jobs, houses, family — so as to improve or save the soul. (For the latter group, Covid is a literal God-send, another pestilential prophecy fulfilled![5]) And there is nothing the Puritan hates more than a warm and snuggly Pagan Christmas, with its feasts, family, and financial well-being, as evidenced by the exchange of gifts.

“Turning and turning in the widening gyre,” in its turn the secularized New Jerusalem we now anticipate, await, fear, is the Great Reset we hear so much of now. They told us about it in 2016:

Welcome to the year 2030. Welcome to my city — or should I say, “our city.” I don’t own anything. I don’t own a car. I don’t own a house. I don’t own any appliances or any clothes. It might seem odd to you, but it makes perfect sense for us in this city. Everything you considered a product, has now become a service. We have access to transportation, accommodation, food and all the things we need in our daily lives. One by one all these things became free, so it ended up not making sense for us to own much.[6]

And what rough beast, its hour come round at last,
Slouches towards Bethlehem to be born?[7]

[1] The Departed: [Dignam, after Costigan has quoted Nathaniel Hawthorne] “Pfft! What’s the matter, smartass, you don’t know any fuckin’ Shakespeare?”

[2] “No, not life in Israel; no, not life in the USA; eternal life!” – Brother Stair, “The Voice of the Last Day Prophet of God,” recent radio broadcast. For my continuing coverage of Br. Stair’s Overcomer Ministry, see here.

[4][4] As Brother Stair, and I suppose others of his sort, likes to point out, the Satanic New World Order will purportedly be created to ensure peace, yet will actually usher in the final, apocalyptic battle. “And they have healed the brokenness of My people superficially, Saying, ‘Peace, peace,’ But there is no peace.” Jeremiah 6:14.

[5] See “The Relevance of the Revelator: Sheltering in Place with Brother Stair.”

[7] The poem is also connected to the 1918–1919 flu pandemic. In the weeks preceding Yeats’s writing of the poem, his pregnant wife Georgie Hyde-Lees caught the virus and was very close to death. While his wife was convalescing, he wrote “The Second Coming” See also: Lynskey, Dorian, “‘Things fall apart’: the apocalyptic appeal of WB Yeats’s The Second Coming” (The Guardian, 30 May 2020.; Onion, Rebecca, “The 1918 Flu Pandemic Killed Millions. So Why Does Its Cultural Memory Feel So Faint?”.(Slate, 10 May 2020).