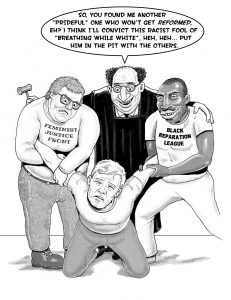 Our objective news media has been warning us for years about the “far Right,” which is an extreme movement that is always on the rise and always threatening to erupt into cataclysmic violence, an ever-looming possibility that all People of Color must wrestle with, even in their dreams, causing them to suffer diminished employment prospects and attenuated test scores.

One of the slipperiest things about controlling the “far Right,” though, is that its more shadowy elements have penetrated law-enforcement agencies and military groups — which, historically speaking, “are dominated by white men” — especially in Germany, which has had a white-guy-domination problem since, like, forever.

With far-right extremism on the rise across the globe wherever there are large numbers of white men around to dominate things, it’s a blessing that there are so many paid experts willing at the drop of a dime to call out hate, Right-wing extremism, fascism, xenophobia, misplaced anger, excessive anti-Semitism, and flat-out crappy behavior by the white men of the far Right.

According to the British “think tank” the Royal Services United Institute, although far-right extremism is not new, “It was been given a renewed voice and expanded its influence and impact in 2020.”

Where? What are they seeing that I’m not?

Because the “threat is growing,” Australia’s government last week began investigating “the rise and threats posed by far-right extremism” in Oz. One might think that being a largely untamed continent of only 25 million people, maybe 20 million of whom are white, perched right under a continent of four billion Asians ready to strike like a kitten pawing at a scared little white mouse is a greater existential threat to the Australian state than “far-right extremism,” but one would be a racist if one might think such things.

Because hate and far-right extremism and unbridled whiteness are like a three-headed albino cobra ready to sink its six fangs into unwitting, barely conscious, and innately innocent Peoples of Color faster than you can say “Stepin Fetchit,” it’s encouraging to hear that the UK’s formidable spy agencies are cracking down on white-male far-right extremists under the age of 10. A total of two dozen such killers-in-training — all of them age nine or even younger — were swept off the streets in 2017-18 before they could strap themselves to bomb vests and terrify Pakistani laundromat owners as they tried to take their morning tea.

For all the fields that they dominate, though, white American males continue to underperform when it comes to crime. Last week our friends at the FBI released their crime summary for 2019. Blacks, who despite all their fornicatin’ remain firm at about 13% of the population, slipped slightly under the fifty-percent barrier and committed 47.5% of all known murders. Scanning this table, there is not a single criminal category in which blacks were not statistically overrepresented, but they really “take it to the hoop” when it comes to murder.

When it comes to criminal offenders, 51.9% were white; 68% of crime victims were white, though. Blacks, of course, were more likely to be offenders than victims.

Of course, nonwhites resort to crime because we live in a systemically white-supremacist nation where white children wear shoes made of giant marshmallows and float through milky-white clouds of privilege en route to the Whipped Cream Festival in the secluded all-white fiefdom of Whitesylvania. In order to divert attention from their evil plot, though, they allow Asian children to dominate them in all academic endeavors to lend the false impression that these tests are “fair.”

The latest SAT scores are in, and they show the same “stubborn race gap” they’ve always shown — first yellow, then white, then brown, then black. Of those who scored over 700 in math, Asians outnumbered blacks by a factor of 43 to 1; in a sort of dumb revenge, blacks were over 20 times likelier than Asians to score under 390 in math. But whereas a sane person who hasn’t been indoctrinated and shamed into submission might think, “Hey, it kinda looks like Asians are smarter than blacks,” no less than the Brookings Institution leaps to the bitterly implausible suggestion that lower black and Hispanic test scores are “a likely result of generations of exclusionary housing, education, and economic policy.”

The reason the gap seems stubborn to you is because you stubbornly refuse to admit the reason for the gap. Some people are simply dumb, and, barring brain-enhancement surgery, not much can be done to cure what ails them.

Speaking of crime, intelligence, and what ails people, were you aware that “Violent crime rates on the South and West Sides of Chicago are linked to high blood pressure and obesity”? I could have sworn it had something to do with black people! According to federal stats, three-quarters of prisoners are “overweight, obese, or morbidly obese,” so it’s starting to increasingly sound like overeating is linked to deviant behavior. In great news for chubby miscreants, a bill that will “Free 500,000 Fat Criminals” was cosponsored by all four members of the rabidly lesbian and viciously anti-white “Squad,” arguing that those “diagnosed with obesity” are much likely to suffer from complications due to COVID-19.

One day soon, you may be pinned to the ground and raped by a newly released and morbidly obese black convict. He may destroy your soul and give you AIDS, but at least neither of you will have the coronavirus.

It was a topsy-turvy week for Jews, leaving them with one victory and one defeat in their tireless quest to eradicate every last particle of anti-Jewishness from the planet. Australia’s Anti-Defamation Commission successfully petitioned to have an animator remove a yarmulke-wearing character who asked a coworker if he could steal her computer code during an instructional video about plagiarism — angry Jews sniffed the anti-Semitic implication that Jews are thieves, and the “cheating Jew” was replaced with a more ethnically indeterminate cartoon character. But angry Jews in Bavaria were unsuccessful in their attempts to have “medieval anti-Jewish sculptures on churches,” one of them 700 years old, removed to protect the notoriously touchy sensibilities of Bavarian Jews. The sculpture in question is known as the Judensau, or “Jew pig,” which shows “people identifiable as Jews suckling the teats of a sow while a rabbi lifts the animal’s tail.”

As has been the trend since, oh, forever, whites continued to endure ritual public humiliation — some of it at their own hands, much of it in the form of aggressive racial taunting by nonwhites.

In the most pitifully self-flagellating article by a white ethnomasochist this week, Kristin Finan — who apparently made a habit of adopting nonwhite children as if they were exotic pet chinchillas — feels even worse about being white than ever:

As a white adoptive mom with six kids. . . if ever there was a time to embrace being uncomfortable and acknowledge that uncomfortability [sic] is often the precursor to change, it’s 2020. . . . After we accepted our first foster placement of an African-American baby girl, I reveled in comments from friends and neighbors calling us saints and superheroes and quickly dismissed criticism. . . . I learned about things like white savior complex (which I had) . . . it’s time for us white adoptive parents to stop hiding behind prayers and God’s will and cute hashtags and use our white privilege to help dismantle racist systems that rip so many people’s lives to shreds.

What are the odds that one of this woman’s half-dozen transracial adopted kids stabs her to death in her sleep one night?

Ijeoma Oluo is a fat and uncomely black woman who has made a living complaining about “drowning in whiteness” and recently released a book about alleged white-male mediocrity. She fairly lifts her multicolored traditional African dress and feverishly flicks her shiny black coffee bean at the idea that her writing has triggered white men to the point that they are threatening suicide:

Nobody is more pessimistic about white men than white men. . . . White male identity is in a very dark place. White men have been told that they should be fulfilled, happy, successful, and powerful, and they are not. They are missing something vital — an intrinsic sense of self that is not tied to how much power or success they can hold over others — and that hole is eating away at them. I can only imagine how desolately lonely it must feel to only be able to relate to other human beings through conquer [sic] and competition. These white men are filled with anger, sadness, and fear over what they do not have, what they believe has been stolen from them.

And over at the Good Men Project — where the only good man is a man who says men are bad — a black photo-retouching enthusiast by the name of William Spivey writes maybe the dumbest thing I’ve seen all year, or maybe I’m just tired:

Even today, you can witness white people shooting other white people while stirring up violence during otherwise peaceful protests, and the media labels it as a violent Black Lives Matter protest. . . . How long does it take to be white too long? The answer is similar to how many licks it takes to get to the center of a tootsie pop. Some people bite into the philosophy of white supremacy instantly, and for others, it’s a much more gradual process. Some may dislike the chewy chocolate center and stop before they get there, and others may view it as the best part, embracing it fully.

If you’re one of those racist whites who insists you’re not a racist, now there’s a card game for you called I Am Not A Racist that will convince you that, yes, you are a racist, even though you say you aren’t.

Charley Pride — a black country singer who sold 25 million records to an almost entirely white audience — was someone who made a point out of not being a racist:

But when the Associated Press eulogized his passing at age 86 last week, here was their lede:

“Charley Pride, one of country music’s first Black superstar [sic] whose rich baritone on such hits as “Kiss an Angel Good Morning” helped sell millions of records and made him the first Black member of the Country Music Hall of Fame, has died.”

No matter how much Charley Pride tried to play down being black, the Associated Press mentioned it twice in one sentence — and they capitalized it both times.

Maybe that’s because “skin hangups” aren’t a disease — they’re a fact of life.