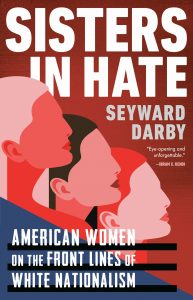 This badly named book began with a cover story in Harper’s back in September 2017. It was about female activists and intellectuals on the Far Right. While not entirely sympathetic to its subjects, “Rise of the Valkyries” was often whimsical and droll, as its title and cover illustration suggest.

Author Seyward “Sadie” Darby approached her subject with an air of naïve wonder, like a documentary maker scouting in the bush. Her investigative premise was that nationalist and Rightist women are a rare and curious phenomenon. Why do they even exist? 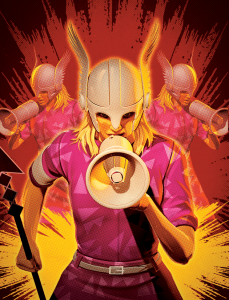 Which is rather like asking why some women carry umbrellas. But it’s a good starting point for middlebrow journalists and readers who know little of either politics or umbrellas. And its open-eyed simplicity gave Sadie entrée to a broad mix of interviewees. They included a writer, an academic, a stay-at-home mom, and, best of all, the main “Valkyrie” of the article, Red Ice’s Lana Lokteff.

Lana and Sadie had a long chat together in a rooftop bar in Charleston. Meanwhile, Lana’s husband Henrik Palmgren taped it all, just for the record.

That was back in April 2017. A lot happened in the next few months. By the time it was published in late August, “Rise of the Valkyries” and its illustrations looked woefully transgressive. Superficially, they seemed to be promoting far-Right women as an exciting new team in the political arena. The article’s kicker was, “Can the Alt-Right Shed Its Misogynist Roots? These Women Say Yes.”

Actually, the article was pretty negative, a real point-and-splutter, with Sadie going Wow just wow I can’t even every couple of paragraphs. But in the context of the time, it was nonetheless Beyond the Pale, far too fair and balanced. That sort of treatment, right after Charlottesville, was not permissible in the mainstream media. “There were good people on both sides,” President Trump is supposed to have said, a capital offense for which the media Left has never forgiven him.

And now, let’s move on to 2020 and the book under review. It turns out to have a risible cover (the Three Races of Woman?), an offensive, misleading title, and a bloated text filled with gaseous ideology and foul innuendo. It couldn’t have been published otherwise. Not by Little, Brown, anyway.

Sadie begins with a story of a white woman berating a black female for blocking her at a gas station in the lower Shenandoah Valley, and proceeds to sermonize about how “racism” is America’s original sin. It’s the single note she bangs away on for the entire book. Racism is bad because everybody’s basically racist and the Nazis and KKK were racist and they were bad. Sadie’s a Southerner, and her people fought for the Confederacy, and she knows that was bad and she must make amends.

I gather the title “Sisters in Hate” was the publisher’s choice, and Sadie had to go along with it to atone for the glittering presentation in her Harper’s cover story. But it’s completely inappropriate, because the featured personalities aren’t “sisters under the skin” at all. Sadie has merely fished up a few American women with nothing in common with each other.

And as for “hate” — well, that doesn’t actually mean enmity or disdain here. It’s just a cant word that the ADL and Daily Worker threw at any conservative in the 1950s and 60s, and has latterly been revived by the SPLC and other rent-seeking organizations of that stripe (“Hate Not Hope,” “Life After Hate”).

The book’s insides consist largely of recycled notes from the Harper’s article, padded out with personal anecdotes and historical factoids. Some of Sadie’s tangents are really bewildering. At one point she starts talking about eugenics in Virginia in the 1920s, and how 85% of the field researchers were women:

Men like Josef Mengele and Madison Grant were the best known purveyors of racist science and policy at the height of the eugenics movement’s popularity. [Josef Mengele? 1920s? Virginia?] Women, though, were on the real front lines, incorporating eugenics into the fabric of everyday life.

Just fancy that. Women were interested in heredity and purity of blood even in the 1920s. Must be a female thing.

Less historically, Sadie tries to explain things by invoking Margaret Atwood’s novel The Handmaid’s Tale (or more precisely the recent television series). She repeatedly suggests that women on the Right are like the character Serena Joy, a hymn-singing leader of traditionalist women.

Personally, I was never a fan of that dystopic fantasy. But I do recall that Margaret Atwood conceived it as a satire on American liberals’ hyperbolic fear of the Moral Majority in the 1980s. Sadie is too young to recall the context. Like a lot of self-described young “feminists” I see on Twitter, she imagines that The Handmaid’s Tale was meant as a fearsome warning about the Dangers of the Patriarchy.

She also fills many pages with digressions about Nazi mysticism and Odinism. End of the day, Sadie has two comic-book explanations for White Nationalist women — excuse me: “women who hate.” Either they are Handmaidens of the Patriarchy, or they are Nazi mystics in the tradition of Savitri Devi and Françoise Dior.

Oh, it’s a rich magpie stew, this book, with every popcult gleaning and scrap of Wiki-wisdom that Google can deliver. Sadie is stretching a wafer-thin thesis over 300 printed pages, and that takes a lot of Hamburger Helper. She throws in Emmett Till, and Alan Berg, and Richard Hofstadter’s “Paranoid Style,” too, as well as some personalities she’d probably never heard of before compiling this data-dump: e.g., Elizabeth Dilling, Louise Day Hicks.

She also gives us a potted biography of ad man/humorist Commander G. Lincoln Rockwell, and seems quite fascinated by Rockwell’s correspondence with Savitri Devi. Like many a scholar-squirrel (Gore Vidal’s winsome phrase), Ms. Seyward Darby is eager to show off all the acorns and candy wrappers she’s picked up in her research, no matter how marginal or irrelevant. Another reliable page-filler is her compulsive revisiting of the Charlottesville parade of Costco tiki torches on August 11, 2017. She seems to imagine the tiki torches were a scheduled activity of the following day’s Unite the Right convocation, an event that never happened because it was canceled.

One reason Sadie needs all this stuffing is that the people she interviewed for the Harper’s piece refused to speak to her again. However, Sadie takes her revenge. In the case of Lana Lokteff, Sadie retaliates by denouncing Red Ice videos and tossing in some 4chan filth and unsourced innuendo. She tells an inchoate story about Lana and Henrik buying a house in the Shenandoah Valley. Seems there was a black couple nearby, and when these colored folks found what horrible fiends Lana and Henrik were, they promptly sold their house and moved away. Lana has denied this confused and pointless story, while Sadie admits in a footnote that it may be less than truthful. Seems it came in “over the transom,” in a stranger’s email. Sadie puts it in anyway, perhaps because she believes that a Lie may contain a greater Truth . . . or something like that.

A good start, right? But it gets better. Corinna is also newly a Muslim, and goes to a mosque where she is the only Caucasian. In pre-publication excerpts, Sadie showed us a picture of Corinna in a hijab. We’re not told whether Corinna wears that to her mortuary job and Narcotics Anonymous meetings, or whether it’s all just cosplay, like so many of Corinna’s escapades.

Corinna’s tale reads like a hashed-together, derivative character in some bad television movie about “neo-Nazis.” She comes from a lower-class broken home — check. Did a lot of drugs, probably meth — check. She discovered Stormfront (favorite website of every Lefty) — check. Got involved with “neo-Nazis” in a bad part of Portland — check. Corinna knows more Northwest slums than Gus Van Sant. Moved to Kalispell, MT (meets April Gaede in an IHOP, how perfect!) and then to Port Orchard, WA (she does Northwest Front podcasts with Harold Covington).

And then finally . . . redemption! Corinna sees the error of her ways, and makes her exit by becoming a paid informant for the FBI. Then she gives testimony to the SPLC. And then, finally, she contacts Sadie Darby and asks to be interviewed.

This brings us up almost to the present day, but not quite. On YouTube a little while ago, Corinna announced she had married a Pakistani she met on the Internet. (“I was married 8 hours after I stepped off the plane!”) She went to Pakistan, met his large family, and had herself videoed with a troupe of monkeys, one of whom tore off her headscarf. Another thrilling adventure to check off the bucket list.

Though not included in Sisters in Hate, this last bit gives some jolly insight into the whole Corinna story. She’s an egocentric attention-getter, always getting into something new and risqué. Look at me, I do Nazi podcasts! Look at me, I’m a competitive body-builder! I embalm bodies! Boo boo baby, I’m a Muslim now!

Far knottier is the mindset of our author. Her background and motivation are fair subjects here, since she makes them central to her brief. Consider this plea in her introduction, which she offers as explanation and self-defense:

I am a white woman married to a white man. I am a feminist and progressive. My middle name, Lanier, comes from the poet Sidney Lanier, an ancestor of mine who in addition to writing pleasant verse, was a private in the Confederate army. Several of my forebears fought on the wrong side in the Civil War, and most of my family still lives in the South . . . My parents are liberal; the place where I grew up is not. I once had a babysitter who referred to the predominantly black side of my hometown, situated across a set of railroad tracks from where she and I lived, as “Niggertown.”

You see what she’s doing here. Not just listing her “progressive” and “feminist” credentials, which anyone can do. She’s anticipating sneers about being a Southern Belle, a daughter of the Confederacy. She’s trying to preempt all that by being the first and loudest to damn her own people. A bit like Orwell’s Party members, trying to outshout each other as they denounce Thought Criminals during the Two Minutes Hate.

“The wrong side of the Civil War.” “My parents are liberal; the place where I grew up is not.” No doubt she’s been reciting this for years, in New York and in grad school at Yale, and among her Jewish in-laws, whenever anyone asks her where she’s from. What a sorry state of mind, what a burden to live with.

So let us find sympathy in our hearts — a Two Minutes Compassion — for the wretched self-loathing of Ms. Seyward Darby.

« Yes, This Is a Conspiracy Theory

» Once Upon a Time in London, Nassau, New Orleans, & Elsewhere: Making the World Safe for Satan & Veggie Burgers