This is Why We Had Segregation 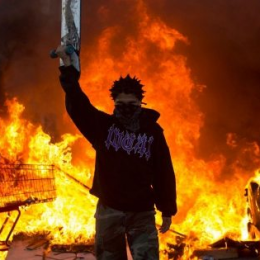 With so much unrest happening in so many places these days, it’s hard to make sense of it all. America is fracturing, that much we can see. But as with an earthquake, all the tidal waves and crumbling structures don’t give us a view of the tectonic plates rumbling deep beneath the surface. But if we could see those tectonic plates, then we might be better equipped to avoid the devastation and find safety.

Here’s a rundown of outrages from that past ten days:

September 14: A black man ambushed two Los Angeles police officers who were sitting in their patrol car, shooting both. The officers were not fatally injured, but when they were taken to the hospital, a Black Lives Matter mob attempted to block the entrance, while shouting “Death to police!”

September 14: A BLM mob rioted in Lancaster, Pennsylvania after police shot and killed a Hispanic man who charged police with a knife.

September 16: BLM harassed and threatened a white man in his home in Milwaukee, Wisconsin for having a pro-Trump flag and for allegedly using racial slurs. The homeowner was arrested after allegedly pointing a gun at the rioters through his window.

September 16: Jake Gardner, a white bar owner in Omaha, Nebraska, defended his business against a BLM mob. After the mob attacked his 70-year-old father and threw him to the ground, he fired two warning shots and warned the rioters to stay away. After another rioter jumped him, Gardner shot and killed him. Initially, the DA ruled the killing self-defense. But after rioters threatened him at his home, he allowed a black special prosecutor named Frederick Franklin to investigate. Franklin filed charges against Gardner for manslaughter, first-degree assault, and making terrorist threats. Gardner committed suicide as a result.

September 20: Without any provocation, a black wearing a T-shirt with a Black Lives Matter slogan shot and killed two whites and a black who were dining at a Louisville restaurant.

September 22: A black saboteur derails a subway train in New York City by hurling metal construction debris in front of it, causing nearly $1 million in damage.

September 23: Black Lives Matter shut down I-94 in St. Paul, Minnesota. Police do nothing.

September 23: Leftist terrorists vandalize a Trump supporter’s garage in Brooklyn Center, Minnesota, and then set fire to his vehicles and camper. They sprayed “Biden 2020” and “BLM” on his garage.

September 24: Four-year-old white child named Rowan Sweeney is murdered by a black gunman who broke into his home in the middle of the night. The man also shot all four adults in the home, putting two in critical condition. The national mainstream media ignores the story.

What to make of all this? Bedlam such as this has become the new normal in the United States since the George Floyd riots began back in May. The above list is just the crest of an enormous wave that is threatening to inundate us with violence and destruction. There is so much already behind it, and so much more to come. Still, those of us old enough to remember the halcyon days of this past February will know that these events — and this unrest we are enduring — are not normal. Those tremors you feel? That’s the historic American nation being throttled by history.

One can ask why. Why are they doing this?

To answer may take one down an unpleasant rabbit hole, but for the sake of clarity, I’m going to elaborate as pleasantly as I can.

The current unrest is the inevitable consequence of three major shifts in Western culture which took place in the previous century:

I argue that it was only a matter of time before the general slackening of pro-white norms would lead to the unrest we see today. Jews provide the funds and organization. Blacks, other non-whites, and useful idiot whites then do the dirty work. We see this everywhere. As the proportion of whites in the population continues to shrink, greater power falls into the laps of non-whites who wish to shape America in their image rather than in that of white people. This requires not only change in government but a show of force on the streets. That the terrorist group Black Lives Matter can assemble rioters at the home of a District Attorney to force him to arrest an innocent man tells it all. They say they are “protesting” systemic racism, but no. This is simply a bid for power. They do this because they can. They see traditional-minded whites as being too weak to resist. And because power loves a vacuum, they swoop in to arrogate for themselves the power they see slipping from the fingers of white people.

The group Patriot Prayer is an excellent example. The Center for Immigration Studies is another. Both are conservative organizations with some influence in our society whose philosophical outlooks remain congruent with the majority of whites. The former promotes faith and patriotism, the latter common sense border control. Most whites want these things. But since the Left controls societal norms in America, whites are not allowed to claim to want these things because they are good for whites. If they do so, they will get punished through mass-shaming, mass-deplatforming, loss of livelihood, legal action, or unwarranted arrest (as in the case of the Rise Above Movement in the wake of Charlottesville). Or, as in the case with that homeowner in Milwaukee, whites could even find hundreds of BLM or Antifa rioters showing up at their doorstep.

The Left is incorrect about whites, however, in the sense that they mistake having faith in the existing system as a sign of weakness. Despite losing much of his luster since 2016, President Trump can still draw tens of thousands to his rallies. The enthusiasm for him among mainstream whites remains strong and sincere. This means that whites are still enthusiastic about what Trump stands for: law and order, strong borders, American tradition and patriotism, and an implicit pro-white populism. Note that this does not necessarily translate to enthusiasm for Trump’s accomplishments, which of course fall short of what he stands for. That these patriotic MAGA whites are not all joining Mike Enoch’s National Justice Party and reciting the Fourteen Words indicates not so much weakness in the face of Leftist encroachments but a time-honored belief that implicit white interests will win out (or at least hold out) against explicit non-white interests. This is how the American system has operated since the 1960s, and most whites simply have faith that it will continue to do so. One can call this “patriotic inertia,” and it is not necessarily a bad thing. After all, there have been many arrests since the Floyd riots. And what have all these riots accomplished besides convincing more and more people to vote for Donald Trump?

Of course, the MAGA whites are wrong. While Trump will most likely win re-election in November, implicit white interests will not hold out against explicit non-white interests much longer — not with the white population about to dip below sixty percent of the US population. Once that happens, expect more and more explicitly pro-white organizations to pop up and resist the Left’s encroachment upon Western Civilization. Whether they will be successful in the coming civil war remains to be seen. Reactionary forces lost in France after the French Revolution and in places like Ukraine after the Russian Revolution. However, the Whites did defeat the Reds in places like Poland after the Revolution. And the Spanish Right was successful after its civil war in the 1930s.

But when all dust settles and whites begin trying to understand how and why this all happened, I predict a radical shift in the historical understanding of the past two centuries among whites. Our white ancestors had it right the first time. Racial segregation was not a means to oppress black people out of an inherent racism or xenophobia. It was a defensive measure aimed at protecting the white populace from a predatory, semi-civilized race that would drag the United States into the Third World if it could. The same could be said of Apartheid South Africa. As I have said many times before, blacks as a group have a low average IQ and poor impulse control. They are destructive and they are dangerous. It makes sense to keep them away — and the problems we’re facing now are the result of not keeping them away. After the anti-white indignities of the Reconstruction, Southern postbellum whites understood the danger of blacks better than we do today, and they took the appropriate measures to keep them in check. They could have predicted what we’re going through right now. As implicit pro-white interests prove less and less successful against explicit non-white ones, modern whites are bound to learn this lesson once again — and hopefully for the last time.